So what comes to your mind when somebody mentions Greek food? For me, it’s Greek salad. In Greece, they do their Greek salad in style – with a huge chunk of feta cheese on top.

I have to admit, having only dined in a Greek restaurant once prior to coming to Greece, I didn’t really know what to expect. To my surprise, Greek food is by far the best European cuisine that is most compatible with my taste buds!

Here, I had the. most. amazing. beef. souvlaki. ever!

(2016 Edit: I noticed that the menu may have changed since I visited in 2014. I’ve added the photos of the menu – beef souvlaki was the one I loved!)

Thanasis takes up a big space in the competitive ‘Souvlaki Street’. The decor is simple, the service friendly, the food, wow the food is definitely value for money and very tasty.

Beef souvlaki, 11€. By far the best souvlaki I’ve ever had! The generously served hearty pieces of meat were incredibly tender with just the right touch of spices and flavours. It came with chunks of tomatoes, pita bread and chips. 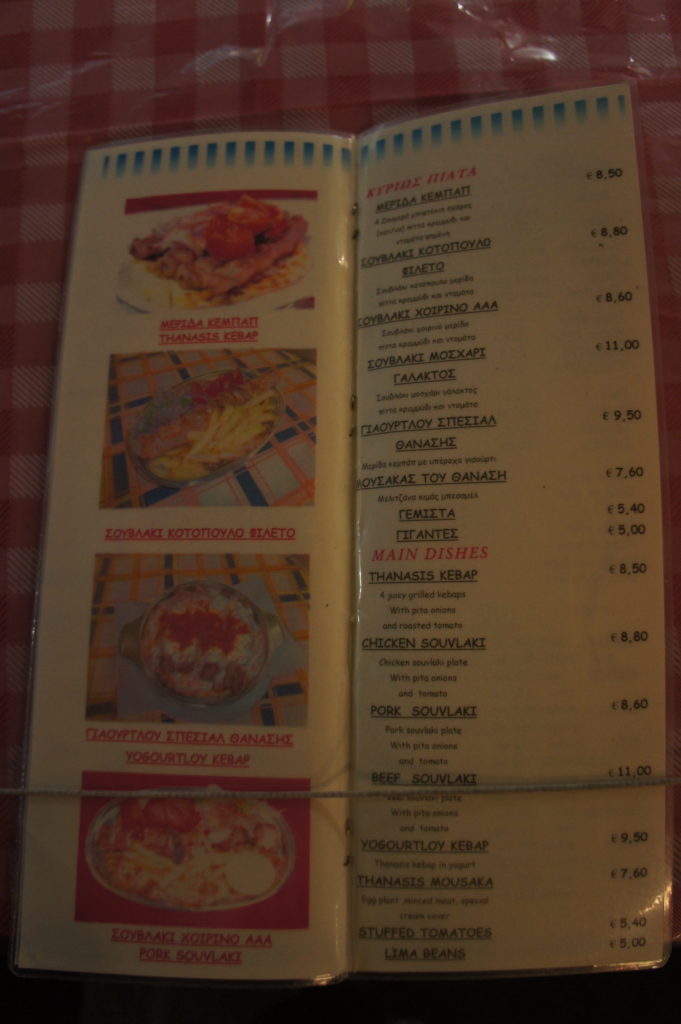 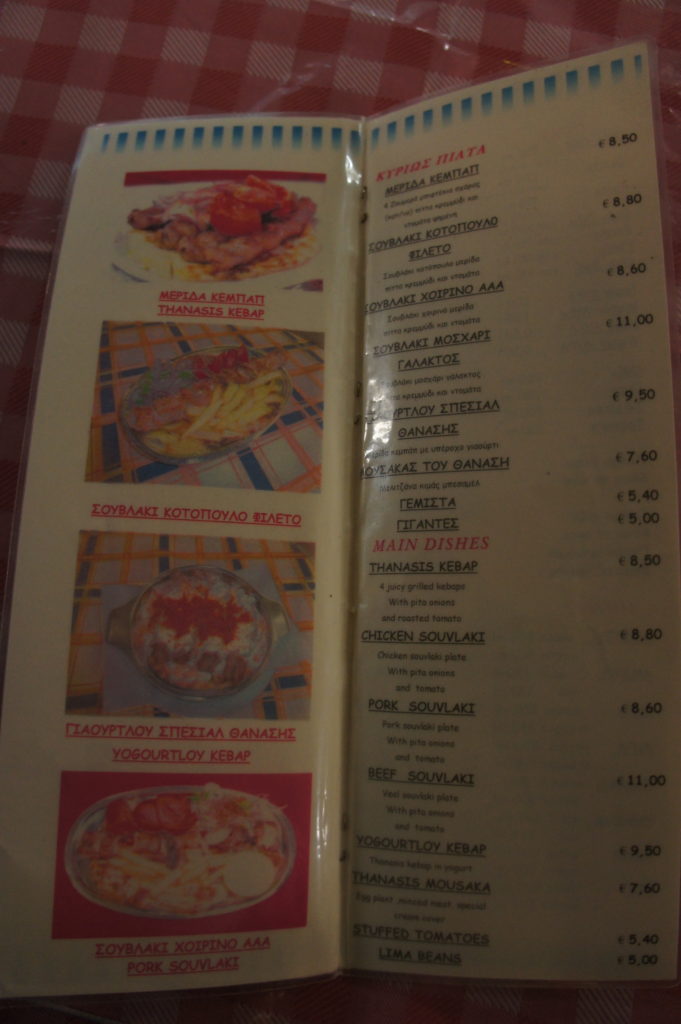 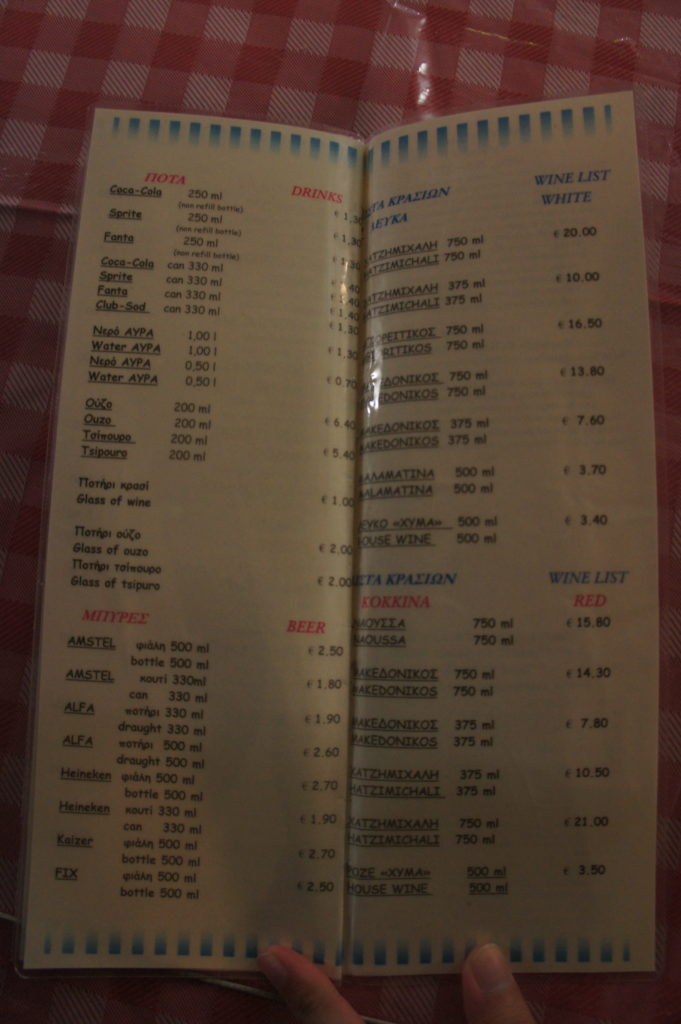 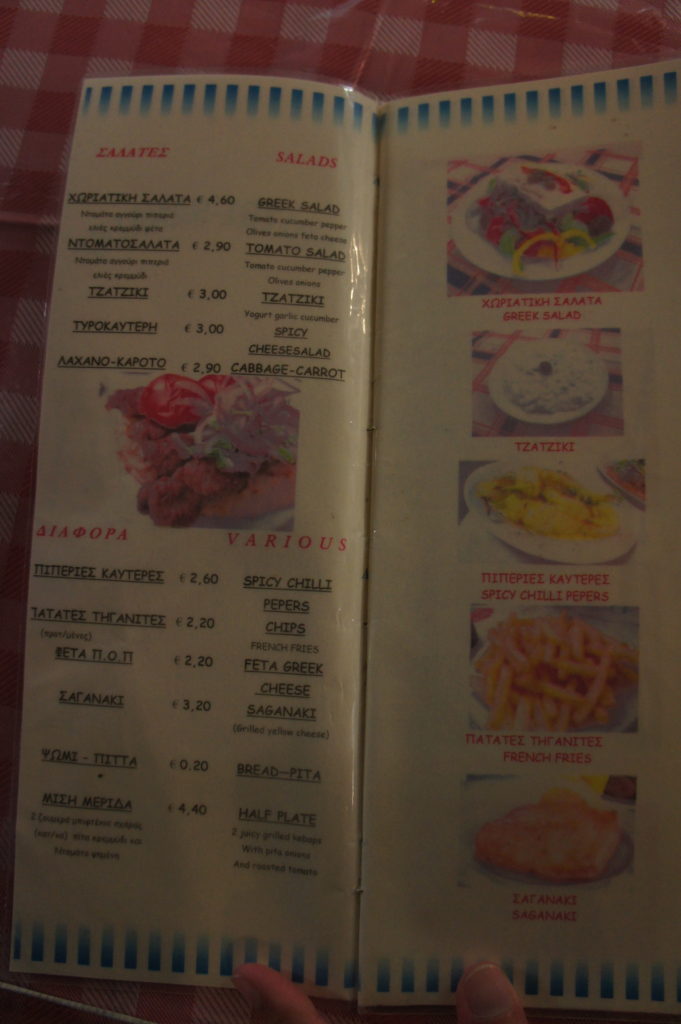 Half plate (2 x grilled kabaps), only 4.40€. Look at the generous serving of kabaps and pita bread – and this was half size only!

Stuffed tomatoes, a Greek specialty. I had never had it before, it’s quite refreshing but very filling.

Ouzo! 200ml for 6.4€. I didn’t do my Greek food research properly, I only knew that ouzo is a Greek specialty and we had to order one while we’re there. It was not until my first sip then I realised it’s strong, strong, Greek spirit that tastes like anise. Anise…? I don’t really get it.

Interesting fact though: Ouzo will cloud up when combined with ice/water!

We randomly picked this restaurant in the middle of Plaka. At first, I was a little worried about it being a tourist trap because of its prime location. Fortunately, the food was quite alright and reasonably priced (considering it’s right on the main street).

Unfortunately, however, I don’t know its English name so I can’t tell you where it is except it’s right on the intersection on one of the streets in Plaka.

Fried zucchini, 4.5€, definitely my favourite dish here! It was crispy on the outside yet still moist on the inside, the aroma of zucchini was retained and it was not greasy at all. It went well with our Alpha beer, 3.8€.

Moussaka, 6.9€. Layers of eggplants, potatoes and meat, this reminded me of lasagne (but this Greek version is not as moist).

This was the first thing that we had in Athens. There were lots of street vendors selling these sesame bread rings on Ermou Street. It tasted just as I’d imagined it, sesame and bread, nothing extraordinary but made a good on-the-go snack.