I liked Florence, but I didn’t love it.

Almost every single person that’s been to Florence raved about this city when I told them I was planning a trip to Italy. I have to admit, I had high expectations for Florence before I came. But then again, I had high expectations for every city that we visited this time (except for Rome, because everyone kept talking it down), yet Florence was the only one that did nothing for me.

The leather goods market was full of scams and counterfeits, the gelato was much more expensive than in Rome, and overall we just felt Florence’s simple beauty was overshadowed by these overly calculated tourist traps. Having said that, I’m not denying that Florence is a likeable city, and we especially enjoyed the meal we had at Trattoria Mario (see below for full review). I just didn’t fall in love with it.

Here’s our video highlight of our time in Florence & day trip to Pisa.

The museum of Duomo comprises of the Basilica di Santa Maria del Fiore , Brunelleschi’s Dome, Giotto’s Bell Tower, the Baptistry of San Giovanni, the Crypt of Santa Reparata and the Historical Museum.

The fascade of Basilica di Santa Maria del Fiore was quite intriguing – it’s got colours! The details were also admirable and different from the other bascilicas we’d seen in Italy.

An interesting fact about the Dome (known as “Doumo”) is that it is still nowadays the largest masonry dome in the world. However, when the construction of the bascilica started in the 13th century, they didn’t have the technology to finish the dome… but no problema, they built the bascilica anyway and knowing (or praying and hoping?) that their successors will make it happen! Pretty bold huh.

So they left a hole there, eventually, in the 1400s, the architect Filippo Brunelleschi travelled to Rome, studied the Pantheon, did the math, and voila, everyone’s beloved Duomo was completed.

We were going to go to the Accademia di Belle Arti Firenze to see the famous David, however, we added Pisa in our itinerary last minute, and didn’t have time for him in the end. Oh well, luckily there’s a life-sized replica in the Pallazzo della Signoria. Here is where the real David used to be, until they moved him into the museum.

The Ponte Vecchio is a Medieval stone closed-spandrel segmental arch bridge in Florence, with shops built along it! There used to be a lot of bridges like this back in the old days in Florence, until the Germans bombed them all during their WWII retreat of 4 August 1944 to slow down the British troops. Luckily, they left the Ponte Vecchio. Rumours had it that it was Hitler’s express order to leave the Ponte Vecchio intact so its beauty wouldn’t be destroyed.

In the old days, the bridge was occupied by butcheries. Nowadays, they are tenanted by high-end jewelry and gold shops. It’s a pedestrian bridge and it was packed with people when we visited.

Who doesn’t like a city square with a merry-go-round!

These lovely cows were being showcased at the square. The “fleur-de-lis” symbol on their head is on the flag of  Florence, that’s why you would see it all around Florence when you’re there.

If I ever come back to Florence, it wouldn’t be for anything else, but for Trattoria Mario. The food we had here was absolutely excellent and very, very reasonably priced.

Trattoria Mario only opens for lunch. We got there just before 3pm, and there was still a huge queue. The guy took down our name and told us to come back in an hour, and promised that he would seat us if we came back later. Not sure a 4pm meal could still be considered “lunch”, haha, but we were just thrilled that we managed to get in!

The restaurant itself wasn’t big, and sharing a table with fellow diners appeared to be the norm here. There were coat hangers on the side of the wall, but the ladies’ bags would have to go on the floor as there was simply not enough space. 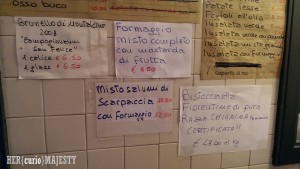 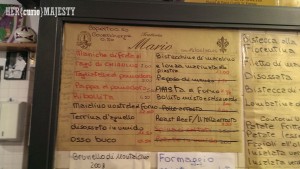 Ordering was the challenging part as there was no printed menu, and their only menu was written in these pieces of paper and posted on the wall in front of the kitchen. I got Mike to maneuver through the tables and diners to take these photos for us so we can look at them on our phone at our table (the Spanish couple next to us saw this and did the same, hehe). It was written in Italian with a seemingly over-simplified English translation written in pencil next to it.

In the end, I just pointed to other people’s dishes and said I wanted the same. 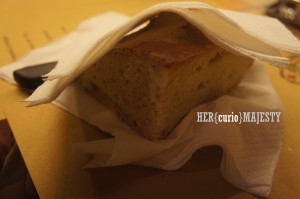 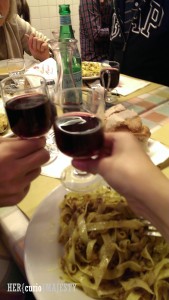 The bread was placed like this on the table when we got seated, simple no-nonsense fare. The house red was only 5€ for 500ml!

Almost everyone around us ordered this, so we did too. It was, hands down,the best pasta that I had in Italy (Da Enzo‘s carbonara in Rome came second). I just pointed it off another guy’s table, so I am not entirely sure if this was the Maniche di Frate al ragu di chianina (meat sauce pasta), 7€, but I think so.

This is the Ribollita, 4.5€, Florence’s specialty vegetable soup. The texture was almost paste like and very filling. It was not really my type of soup, but was very stomach warming and flavorful nonetheless.

The waitress (a middle aged lady who spoke a little English) recommended us their osso buco (ox tail), 10.50€. It was beautifully cooked to perfection, very tender with a well-balanced sauce. Yum!

We enjoyed this meal so much, we wanted to come back the next day to try their steak. Unfortunately, it was closed for the Easter holiday – we figured that was probably why they still seated us after their usual opening hours on the day we went, just so not as many tourists would miss out during their closure?

Almost all of the other gelato places that we saw in Florence (especially the ones near the Duomo) only had the bare minimum of choices (e.g. chocolate, vanilla, strawberry, pistachio and that’s it). Most of them were also tagged onto a cafe or restaurants and looked like they were only set up to suck more money out of the tourists’ pockets. That’s why Mike and I were thrilled to have stumbled upon Festival del Gelato, only a few steps off the main street (Via dei Calzaiuoli) leading to the Duomo.

The neon sign and the decor was extremely tacky, but as soon as we walked in, we realised we had hit  a gem in Florence – Look at all these flavours! 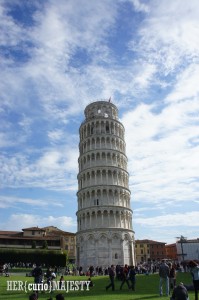 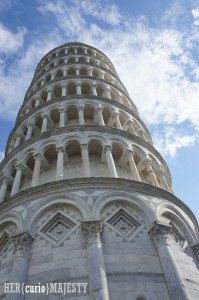 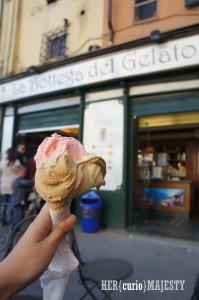 It’s easy to do a day trip from Florence to Pisa, click [here] to see my review on our Pisa day trip.