We’ve all learned about it in science classes and we’ve all seen photos of it.

Still, it’s quite an experience seeing the Leaning Tower of Pisa first hand.

I think it’s safe to say that there is nothing else in Pisa for time-tight tourists other than the Leaning Tower of Pisa.

The good thing is, it’s an easy 1hr-20mins train ride from Florence and the tickets are affordable at 12€ each way. The Tower itself is also within walkable distance from the Pisa train station. 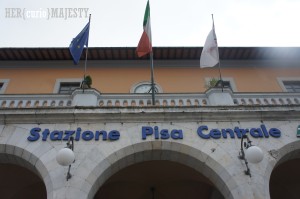 If you’re doing a day trip from Florence, like we did, just take the train from the Firenze S.M.Novella station to Pisa Centrale station. As soon as you get out of the train station, keep going straight and follow the horde of tourists, cross the bridge, walk a few blocks more, then you will see it.

Our first impression of the Tower from afar: Mmm, it’s smaller than we had originally imagined.

The “Wow” factor only kicked in when we got closer to the Tower. There’s no other way to describe it, it’s…very tilted.

Of course, a trip to Pisa wouldn’t be complete without taking home some interactive photos with the Tower…

Once you’ve got your own photos taken, it’s fun to observe what other fellow tourists are doing… The lady behind us was doing a classic “Oh you’re leaning, lemme give you a hand, Pisa” pose.

This is a photo of the Leaning Tower of Pisa with the Cathedral of Pisa next door.

A funny thing we noticed is that the Tower itself felt a lot more tilted when we looked at it with our bare eyes, but when we took a photo of it at the exact same angle, it didn’t look as tilted in our camera and phone somehow!

The magnificent Cathedral is a World Heritage listed site, and the Tower is considered part of it. However, I say the Tower outshines the Cathedral on any given day just by the sheer amount of tourists flocking here from all around the world to have a classic Pisa photo taken.

By the way, it is possible to climb the Leaning Tower but at a price of 18€ per head – significantly higher than any other monuments. Even so, almost all time-slots were sold out when we got there in the early afternoon.

As soon as we crossed the bridge on our way from the train station to the Tower of Pisa, almost everyone had a cone of ice cream in their hands. And that’s the thing with ice cream craving… like yawning, it’s contagious!

When you are on your way to the Tower, La Bottega del Gelato would be on your left, hidden behind a statue. we actually missed it the first time, luckily we saw it on our way back and got a 3-scoop!

3 big scoops for 2€, this was the most value-for-money gelato we had in Italy. And it felt good to have some decently priced gelato after coming from Florence. Click [here] to see my Florence review.