Venice. So classy, so mysterious, so full of pride.

Although no longer the once powerful and wealthy Republic that it used to be, Venice’s one-of-a-kind beauty and rich history will forever hold a significant place in every traveller’s heart.

On our last night, Mike and I deliberately went exploring the area behind St Mark’s Square without our map so that we could get onto the “we got lost in Venice” bandwagon – ask anyone that’s been to Venice and they would tell you, it’s very easy. It only took us a couple of blind turns, bridges and alleyways away from the main street to lose our sense of direction. The intertwining canals and the narrow, almost hidden, alleyways between the buildings made Venice a mesmerising maze waiting for travellers to take up the challenge. A lot of times, just when I thought we’d hit a dead-end, a pathway would just miraculously open up. 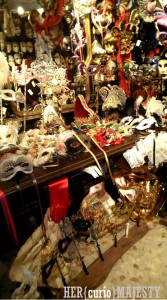 We stumbled upon a fancy mask shop with the most amazing collection of masks that I had never seen in my life. We didn’t know how we got there, it was as if it just appeared and it was the most magical thing.

The Venice lagoons are World Heritage listed and the city deserves every effort to prevent it from being swallowed by the rising sea level. Next time when you’re asked to do something for the environment and global warming, think of Venice, and do your bit to save the Earth!

During the day, the Square was packed with people, street vendors and pigeons alike. At night, Venice worked its magic and infused a totally different character to St Mark’s Square completed with live open-air orchestra performances.

There were three cafes with daily live orchestra performances within the Square, namely, Caffè Florian, Lavena, and Grancaffè Quadri, all set up outside for everyone’s enjoyment – it’s free to watch behind the tables. We stood in the Square for a while one night for the music, soon we noticed each orchestra had their own repertoire and style that was quite distinct from the other two. So even if you want to sit down to enjoy the music, you should consider having a listen first, and decide which one you want to put your money on.

Oh, it definitely was a competition.

So what happened was, each orchestra would play a few songs and take a short break; sometimes their breaks overlapped, but most of the time there would be 1 or 2 orchestras playing at the same time. And the crowd would move around whenever an orchestra took a break; or if the other side was playing better songs. We were part of the cheeky crowd that opted to stand and listen, and we felt like we were giving the People’s Award!

Caffè Florian and Lavena were on the same side of the Square, but they were reasonably apart, so they wouldn’t interfere with each other too much. However, we found that they tend to take turns for their breaks so the competition was more between them and Grancaffè Quadri, which was on the other side. I personally preferred Caffè Florian‘s repertoire as it set a very romantic and classy scene for the night. 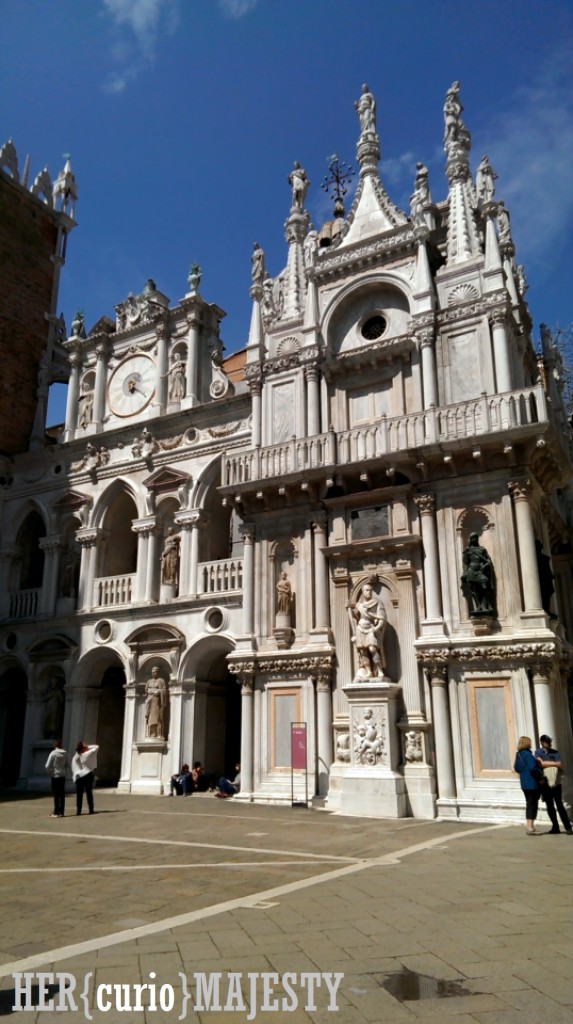 There were restoration works going on at the St Mark’s Basilica when we were there, so I didn’t take any photos. Luckily, we could still see some columns and part of the facade. The Italo-Byzantine architecture was truly special and the end result looked like a completed 3D puzzle – each unique piece of material that matched each other perfectly.

No photos are allowed inside the Basilica, and out of respect, I made it a point not to breach any of these rules (just like how I resisted taking a photo inside the Sistine Chapel). 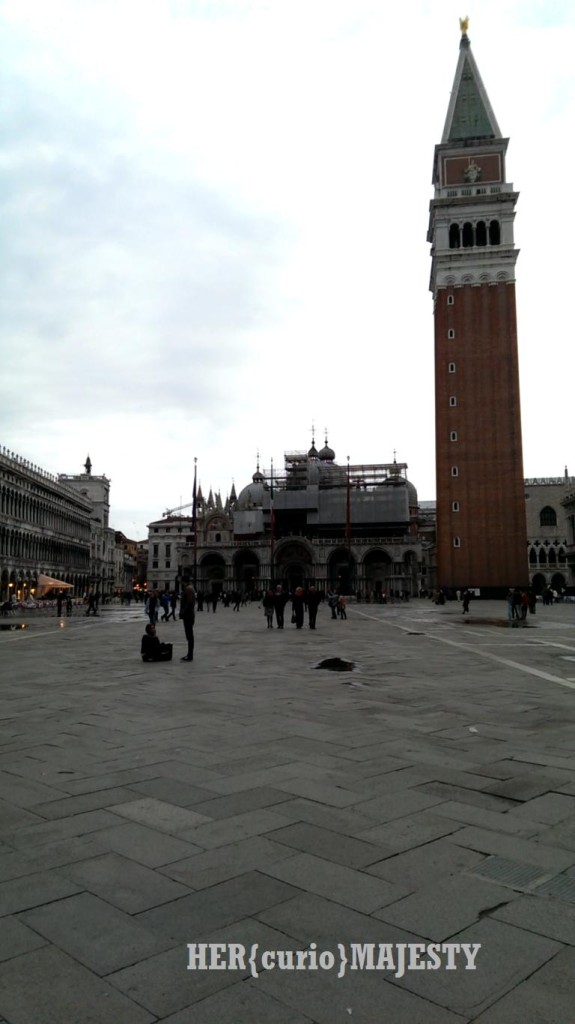 There was a long queue when we got there, but the line moved fairly quickly. If you have a backpack or any big items (such as a pram), you have to check them in at the cloakroom near the Clock Tower. There were signs in front of the Basilica with photos showing the location.

The entry is free. You can also choose to visit the St Mark’s museum upstairs (the steep stairs to your right as you walk in), with an entrance fee of 5€. It’s highly recommended as you would be able to see the magnificent mosaic dome up close, and also the real Horses of Saint Mark (inside the museum) and the replica Horses (standing tall on the front facade of the Basilica). We also had a good view of the St Mark’s Square from atop.

We thoroughly enjoyed our visit at the Doge’s Palace, it’s definitely a must-see in Venice.

The palace was the residence of the Doge of Venice, the supreme authority of the Republic of Venice and its interior was very grand and it’s connected to the Court houses and the Prison.

Even if you’re not interested in history, come for a visit because it gives you a chance to take a walk inside the Bridge of Sighs and the prison! It was such an unforgettable experience walking on and looking out from the dark confinement of the infamous Bridge and imagining if it was the last sight of sunlight that we would ever see…(Sigh).

A photo of the interior of the Palace. It’s not the most extravagant palace but I felt it had just the right touch to exhibit the Doge’s power and class.

This is the Bridge of Sighs from the outside. Convicted prisoners would pass this bridge from the Courtroom to the Prison, and the small openings on the bridge would be the last glimpse of light that they would see in a very long time as they let out a sigh. How poetic.

Entry to the Bridge of Sighs and the connecting prison is through the Doge’s Palace, and it’s all included in the ticket price.

The Venice Casino was the very first casino in Italy and in Europe! The authentic Venetian casino, yea?

Well… yes and no. We were going to pay it a visit, unfortunately, it had very limited opening hours and we didn’t get to go in. The opening hours were not listed on their website so we assumed all casinos open 24/7! Well, obviously not this one. Anyway, this showed that the Casino is probably only preserved for its historical and tourism value than anything else.

For those that are interested, here’s a photo that I took at the door.

This was the view from the Rialto Bridge. Look at the busy cargo ships near the Rialto Market.

We were lucky that we saw Venice on a rainy day, a sunny day and a foggy morning during our 3-day visit.

A trip here was really just for the sake of it, because it’s not like we could do anything with the fresh food since we did not intend to cook.

This is our video highlight of what we saw, ate and felt in Venice.