Burj Al Arab, the sail-shaped luxury hotel that was once the World’s one and only 7-star hotel and was one of the first few things that put Dubai on the international tourist-radar. Until now, it is still one of the most iconic landmark of Dubai.

I thought long and hard about visiting the Burj Al Arab because the hotel premises are strictly hotel and restaurant guests only. Anyone that wishes to pass through the security-patrolled main gate that connects the mainland and the man-made island needs to present their hotel key or restaurant reservation.

Staying at the Burj Al Arab was out of the question as the starting price was something like $USD2000. So I had to make a reservation at one of the restaurants in order to get in. The question was, which one?

Not all of the restaurants within the Burj Al Arab took reservations, and for the ones that did, the cheaper lunch time options were:

I figured, afternoon tea (coffee, tea, cakes and sandwiches) and drinks for this kind of pricing is a rip-off by any standard no matter how good it is; also, a booking at any one of the above-mentioned restaurants would not give us access to other parts of the hotel – which would defeat the main purpose of us coming here. Plus, I just couldn’t decide between Al Mahara (the “underwater” restaurant) and Al Muntaha (the top floor restaurant)….

So I decided to take the plunge and booked us the Culinary Flight luncheon!

The price for the lunch-time Culinary Flight was AED980 (approx $USD266) per person for food only, and AED1620 (approx $USD441) per person with wine paring. We went for food-only for obvious reasons…haha.

This was the view looking up from the lobby, all the way to the tip of the sail. The style of the decor was somewhat tacky but I guess you could call it exotic?

The lobby fountain from above with colour coordinated ponds that cannot be seen from downstairs.

We got there half an hour early so we had a little bit of time to walk around the ground floor. However, remember not to come too early for your reservation because I read that they wouldn’t let you in until it’s reasonably close to your reservation time.

Finally, it’s 12:30pm and it’s time for us to board our Culinary Flight! The itinerary was to have each of the four-course degustation in different restaurants within the Burj Al Arab:

We were taken downstairs to the Al Mahara via a gold plated elevator (not the submarine simulator that they used to have, unfortunately).

Before we were shown to our seats at the Al Mahara, we were invited to wait in this room, which I later found out is the Juna Lounge, the cocktail & cigar bar.

The decor of the Juna Lounge and the dimmed lighting felt a little like an expensive strip club (not that I’ve been to one). Anyway, we weren’t here for long before we were brought to our table at the Al Mahara.

Eating by the huge aquarium was definitely the highlight of our Culinary Flight experience. It was as if we were eating underwater with the colourful fish passing us by!

We were initially shown to another table away from the aquarium (with both of us facing the aquarium but with this table and a walkway in the way), so I asked if we could sit beside the aquarium and the waitress happily obliged. The tables right beside the aquarium were all two seaters so I don’t think it would be possible to change seats if you come with a bigger group.

After being greeted by a friendly waiter, we were shown the menu for today’s degustation.

The procedure was to order all of the 4 courses at Al Mahara for them to notify each restaurant so we did not have to look at the menu again for the rest of our day.

They had a good selection of fresh bread, and I got the squid ink baguette, sundried tomato bun and a breadstick.

Different types of butter for the bread on the table. Salted, seaweed and unsalted .

The first item that we picked out from the menu was the complimentary cocktail. Mike got the Vibrant (gin, almond syrup, grapefruit and pineapple juice, rosemary) and I got the Tropical Paradise (Johnny Walker red label whiskey, fresh raspberry and pomegranate).

We were also asked if we wanted still or sparkling water. Mike said ‘still’ and I said ‘sparkling’ at the same time, haha, so the waiter brought us both. They used expensive water from Italy and thankfully it was included in the price of the Culinary Flight.

My entree was Hand Dived Scallops with Grilled Sucrine Lettuce (ricotta and potato gnocchi rolled in sea shell jus, petit pourpier). It was the best savoury dish that I had for the day.

This was the complimentary mushroom puree palate cleaner with smoke salmon. I didn’t like it because it gave off this funny metal-like smell. But it’s complimentary so it’s ok.

The Al Mahara was definitely my favourite restaurant out of the Culinary Flight experience, and honestly, the only restaurant that I would give a 7-star rating if I had to. Even though the food was not mind-blowingly good, it was decent to fine dinning standard and the overall experience was enhanced by the unique setting, calming atmosphere and professional service.

We spent most time in this restaurant, just chatting and watching the fish. When we decided it was time for our second course, we notified the waiter and he got the manager to send us upstairs to our next stop.

Before we left, the manager gladly took photos for us inside of the gold plated tunnel leading to the restaurant. She was very professional about it and took several with different angle and frame, extra points for service!

Unfortunately, we did not enjoy our next restaurant, Junsui. Not one bit.

First of all, it was in a buffet restaurant so we felt a little out of place having our degustation there. Not to mention the food was a huge let-down.

Mike’s Braised Korean Short Ribs (in soya stock) tasted of soya sauce and nothing else, it was not flavourful and the meat was nothing to write home about. I could honestly make better short ribs than this using the pre-packeted seasoning I buy at Korean groceries here in Sydney.

First of all, there was hardly any duck skin (the essence of Peking duck!) on the meat. The pancake sheets were so dry that the edges were literally cracking. And the sauce was wrong, instead of the authentic Peking duck sauce, they simply used Hoisin sauce.

On the other hand, however, the waiters and the manager were friendly and the service was good. This is a bling bling photo taken at the entrance of Junsui taken by the manager.

I personally think this restaurant should be taken off the Culinary Flight altogether, or, just give the guests a plate and let us try dishes from their buffet as the second course!

From Junsui, we were taken all the way upstairs to Al Muntaha and my spirit got lifted as soon as we stepped in the glass elevator. I was looking forward to it because I knew the view would be superb up here.

And it was. We could see the world-renowned man-made palm tree island from our table.

Wow another full basket of bread. By the time we sat down, we were actually very full already.

View of the Dubai cityscape from Al Muntaha.

We would have liked to stay at Al Muntaha just a little bit longer because we were very very full and even I almost had no space for dessert.

However, the waitresses here were not as friendly and seemed to be in a hurry to send us away to our next stop. We were told that we could enjoy each stop of our Culinary Flight at our own pace, but I got that they may need the restaurant back so it’s fine to send us away; however, I just thought they could’ve done it more delicately for the supposedly 7-star service. 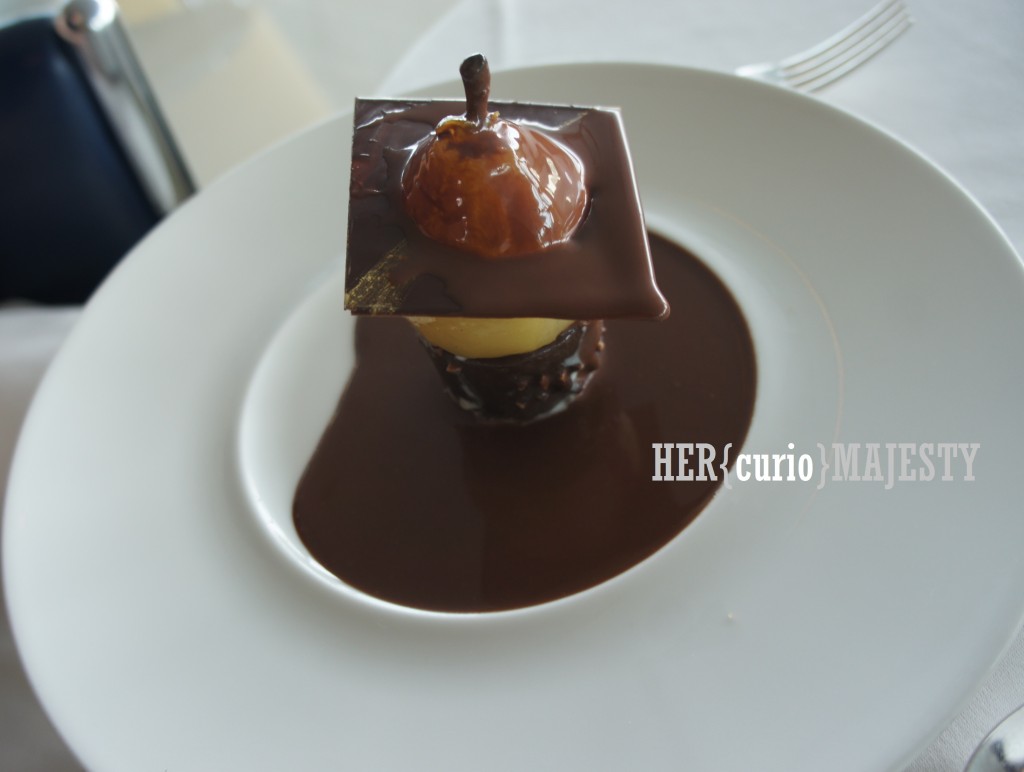 I was glad that the dessert at Sahn Eddar finished strong.

They had whole vanilla beans, fresh mint, fresh lemon, honey and chocolate in a sail-shaped tray as additives to our tea! This was a lovely touch.

We don’t normally spend so much on a meal so I decided to make this experience even more special by declaring it part of the celebration of our 7-year going-out anniversary, which was in less than two weeks’ time then.

I mentioned this in my initial email booking, and they remembered! We were congratulated when we were at Junsui and it made us feel like VIP guests. And that’s not it, at Sahn Eddar, we were given a huge cake in celebration! Although it said “Happy Birthday” but of course we happily accepted it. This complimentary cake was also amazing. Chocolate delicacy seems to be their strongest suit.

The waiter was really thoughtful and knew that we wouldn’t be able to finish our dessert and the cake, so he offered to pack it away for us after we had its photos taken. Now, that’s 7-star service. It felt really special walking around with a box from Burj Al Arab, hehe.

We could see the dancing water fountain from our table and could hear the harpist playing classical music right behind the champagne bar. We took our sweet time just sitting there and sipping tea.

From time to time, the fountain would shoot up a particular strong water beam really high up – we caught a glimpse of it only so we wanted to wait for another one. The waiter told us it happens every 30 minutes, so we waited…30 minutes…40 minutes…50 minutes…an hour…? Nothing happened haha-_- so we left…off to the Dubai Mall for the real dancing fountain. And it was already 5:45pm!

For this price and the 7-star hype, I actually expected more of the Burj Al Arab. Whilst the service was generally exceptional, there was still plenty of room for improvement on the food for it to be on par with other comparable fine dinning establishments.

Having said that, and having my wallet taken a huge blood loss, I am still glad that I decided to take part in the Culinary Flight during our time at the Burj Al Arab because if I had chosen the cheaper afternoon tea option, I would not have had the chance to tour all four of the restaurants and our visit there would be superficial at best. After all, my favourite part of our visit was eating with the fish at the Al Mahara and overlooking the Dubai cityscape & manmade islands at the Al Muntaha. If you are short on time but would still like to explore the Burj Al Arab (simply for the experience and not the food), I would recommend these two restaurants over the afternoon tea at the lobby.

In short, I have had better service and food elsewhere. This was definitely not a value-for-money deal but indeed was a once-in-a-lifetime experience to be remembered and talked about in many years to come.

Our video highlight was mostly taken in the Burj Al Arab, here’s a sneak peak.