“Are you serious? You’ve never been to Watsons Bay?“, exclaimed my bestie, L, and her bf, RE.

The next minute, we were in L’s car driving towards this picturesque harbourside eastern suburb that I’d heard so much about but somehow never got a chance to visit. 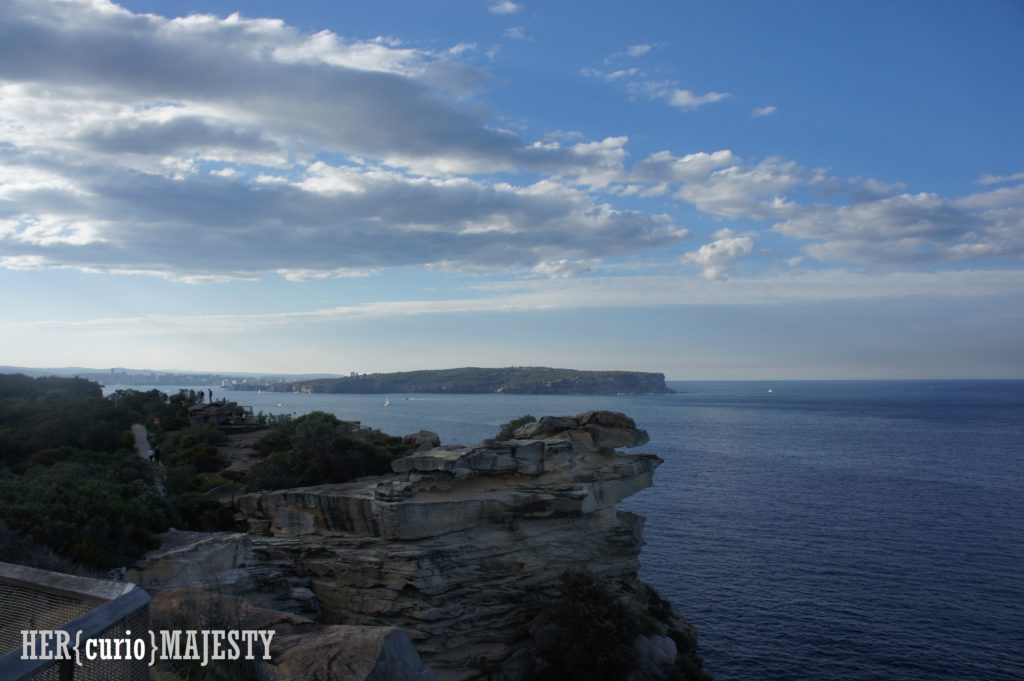 As the official tour guide of the day, RE (because we all know L’s a lostie:p) showed me the Watsons Bay area from three different angles – the first stop was the Gap. The Gap is an ocean cliff on the South Head peninsula of the Sydney Harbour, overlooking the North Head on the other side of the ocean. 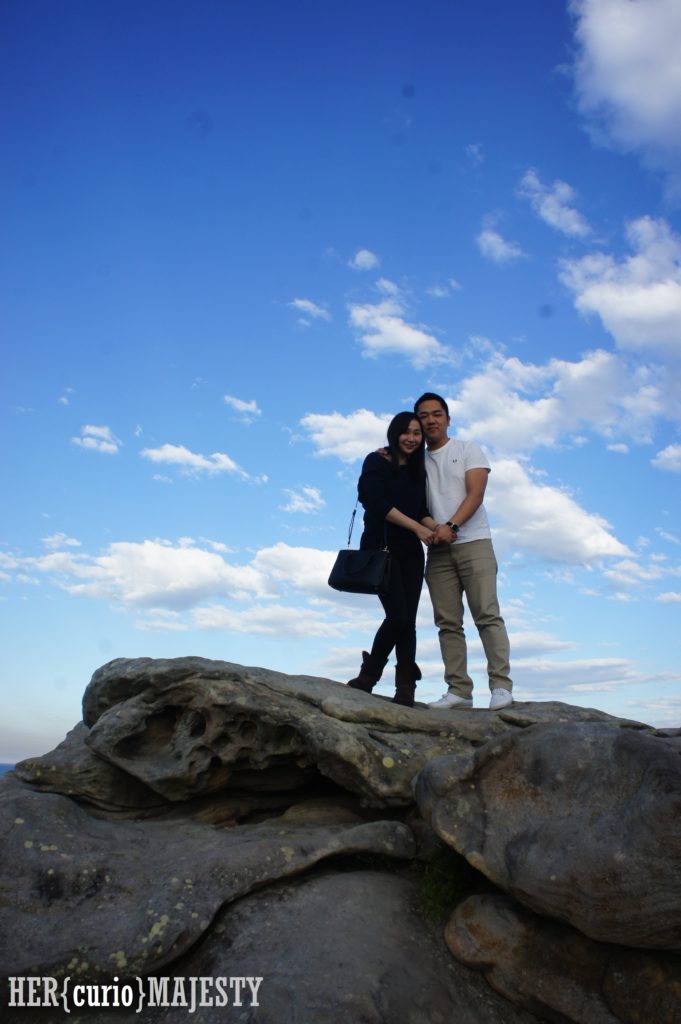 This was my favourite shot of the day. L, you gotta take a photo like this for Mike and I next time!! 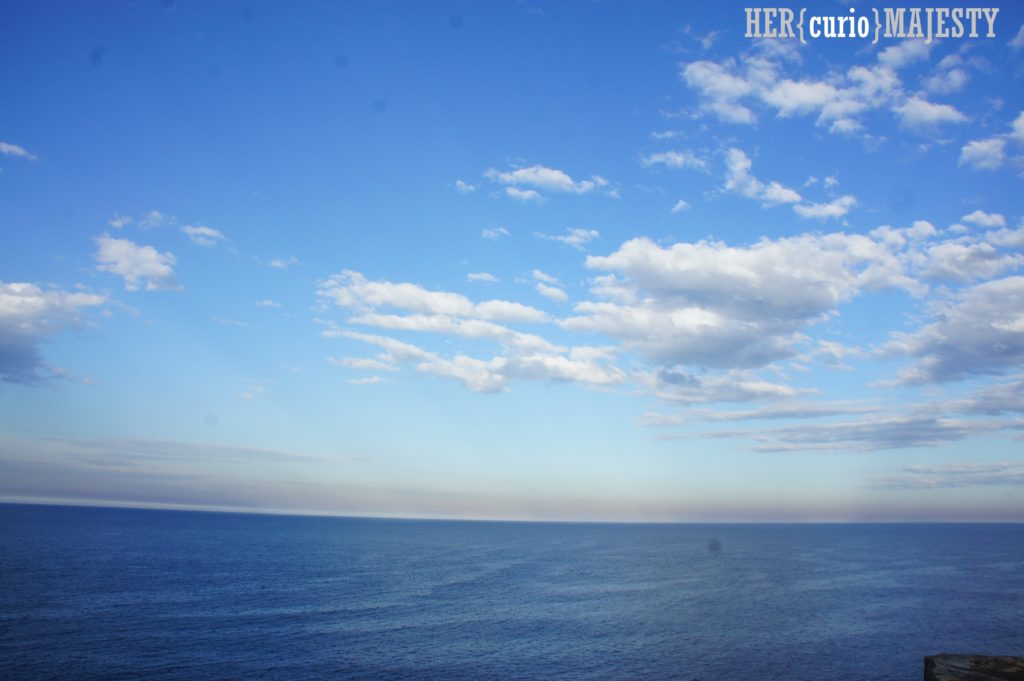 The view that the Gap was stunning. The ocean and the sky painted this beautiful afternoon with different shades of blue and a hint of pink right above the horizon. 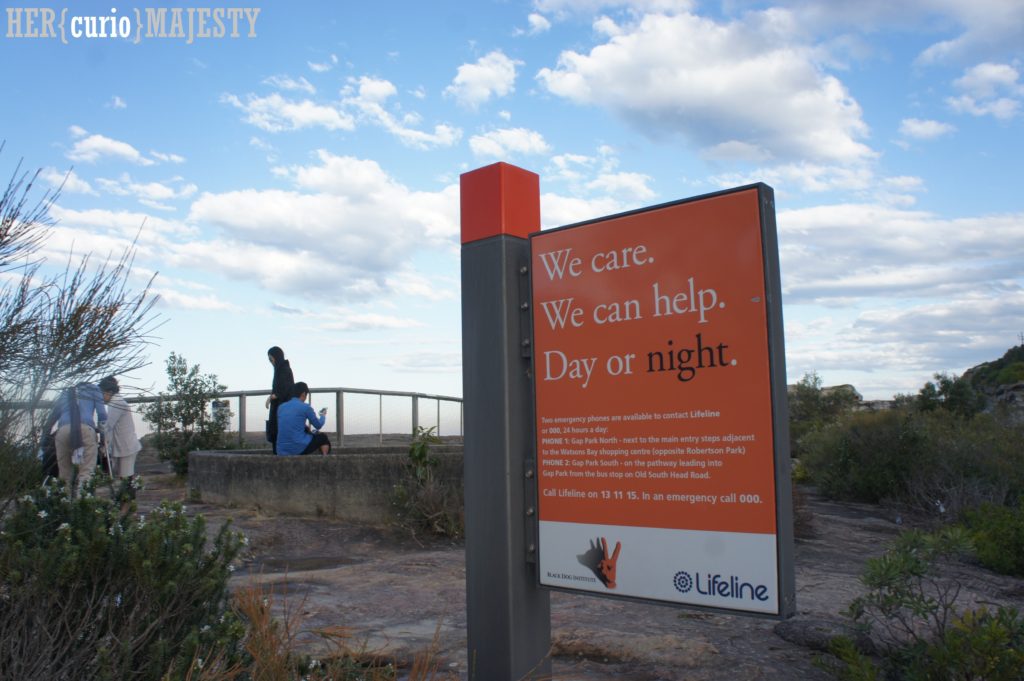 Sadly, the Gap is notoriously famous for being a suicide spot. That’s why the Government had implemented lots of signs, surveillance cameras and even Lifeline telephone booths at the Gap. 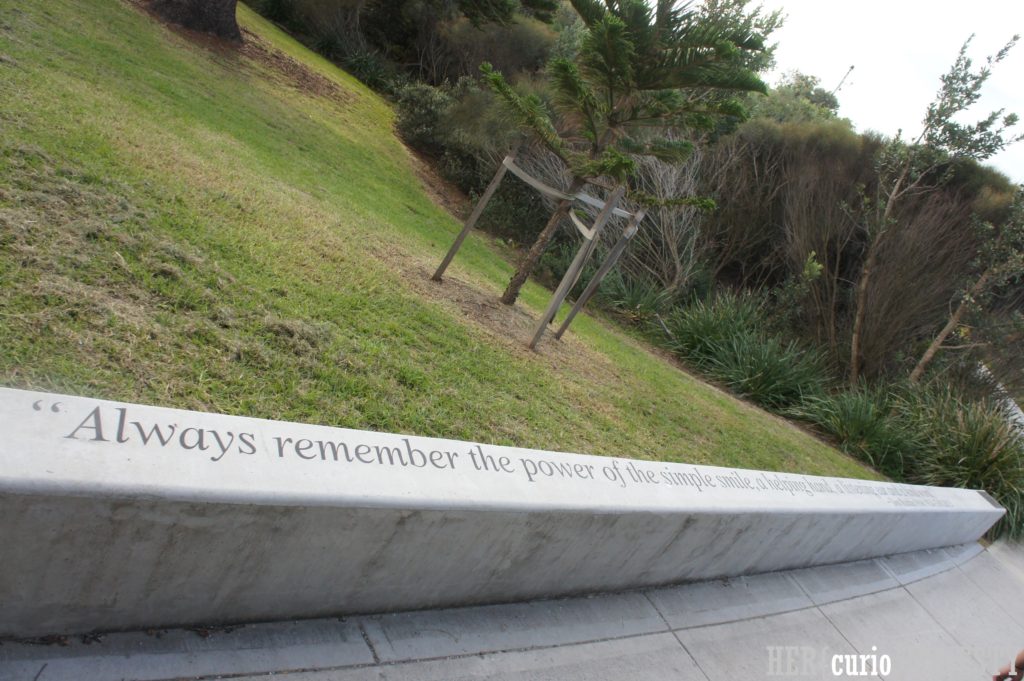 There’s a memorial dedicated to Don Ritchie, with the quote “Always remember the power of the simple smile, a helping hand, a listening ear, and a kind word.” Just when I was pondering, who’s Don Ritchie…Then it suddenly clicked — he was the Angel of the Gap that I had read so much about on the news over the past years. He literally saved hundreds of strangers’ lives by simply going over to talk to them, and inviting them over to his house for tea.

He lived 50 metres from the infamous suicide spot, and he officially saved 160 people (although, his wife said it’s actually about 400) from taking their own lives over 45 years.

Here is the wikipedia page dedicated to him: http://en.wikipedia.org/wiki/Don_Ritchie. And an article on SMH when he died: http://www.smh.com.au/nsw/death-of-the-angel-of-the-gap-the-man-who-saved-the-suicidal-from-themselves-20120514-1ymle.html

What a man with a big and gentle heart. 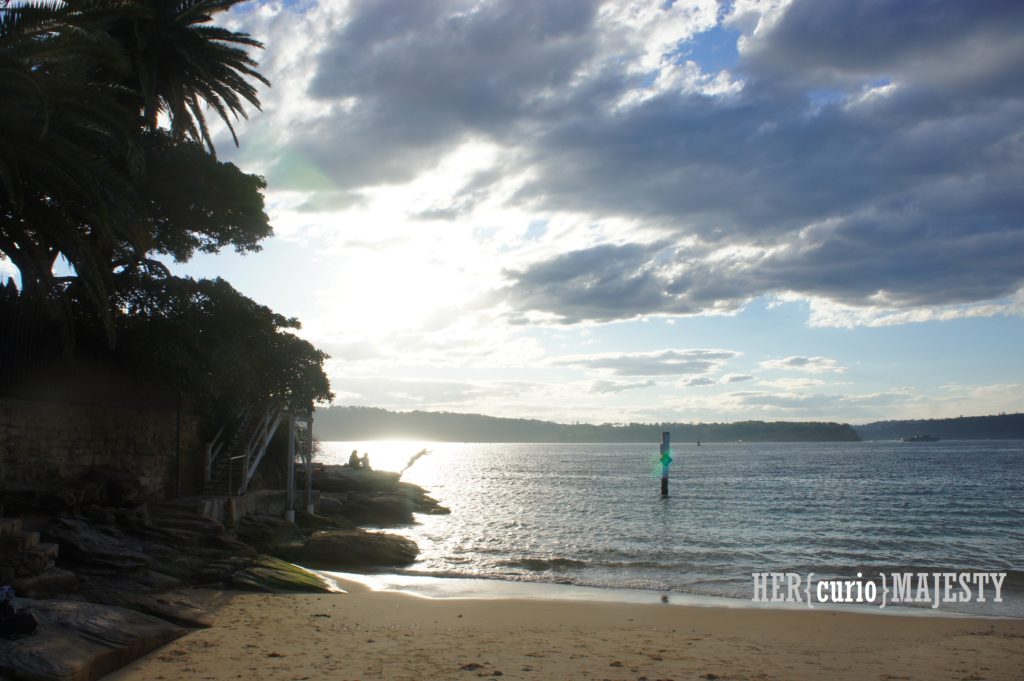 The second stop is this little beach, Camp Cove beach. Sydneysiders really love the beaches, you can always find people swimming at the beach, even in winter. 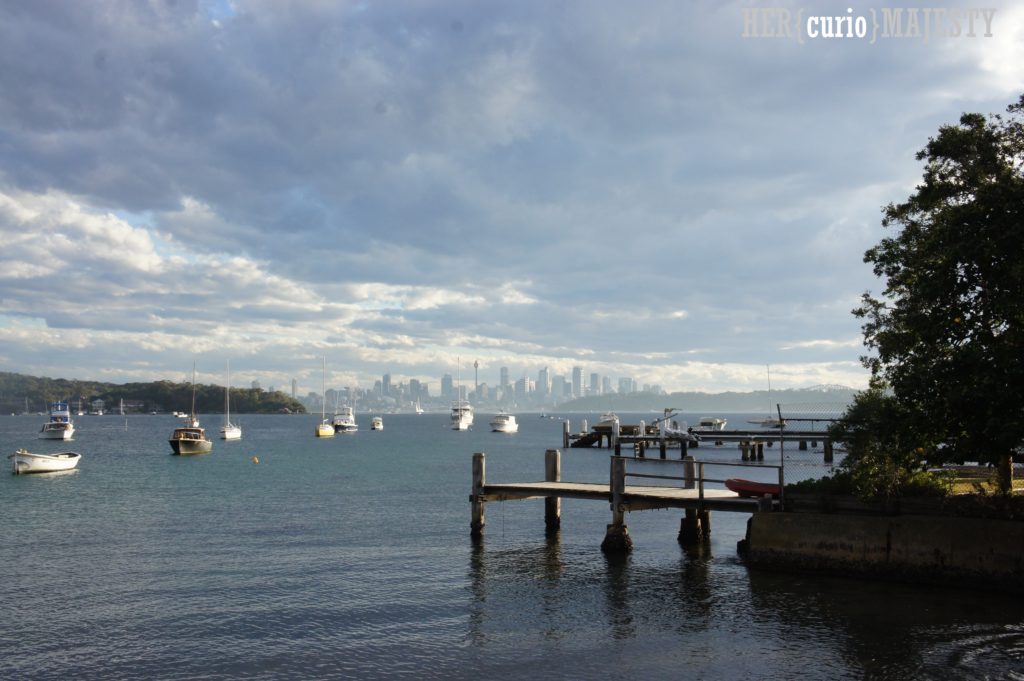 Finally, we arrived at Watsons Bay. The first thing I noticed was the million-dollar view of the Sydney harbour and the city skyline. I haven’t looked at the hustle-bustle city jungle that I work and live in from afar for quite some time, it felt a bit surreal.

As for getting here, Watsons Bay is readily accessible by ferries. Use the TripPlanner on Harbour City Ferries to search for ferries: http://beyondthewharf.com.au/landing. 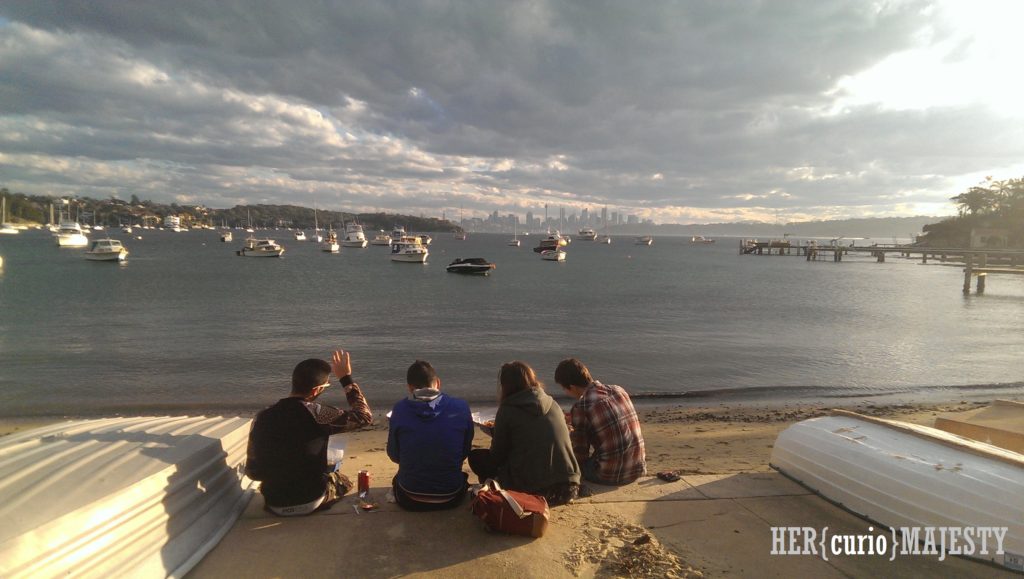 Having fish’n’chips by the beach is an Aussie tradition. 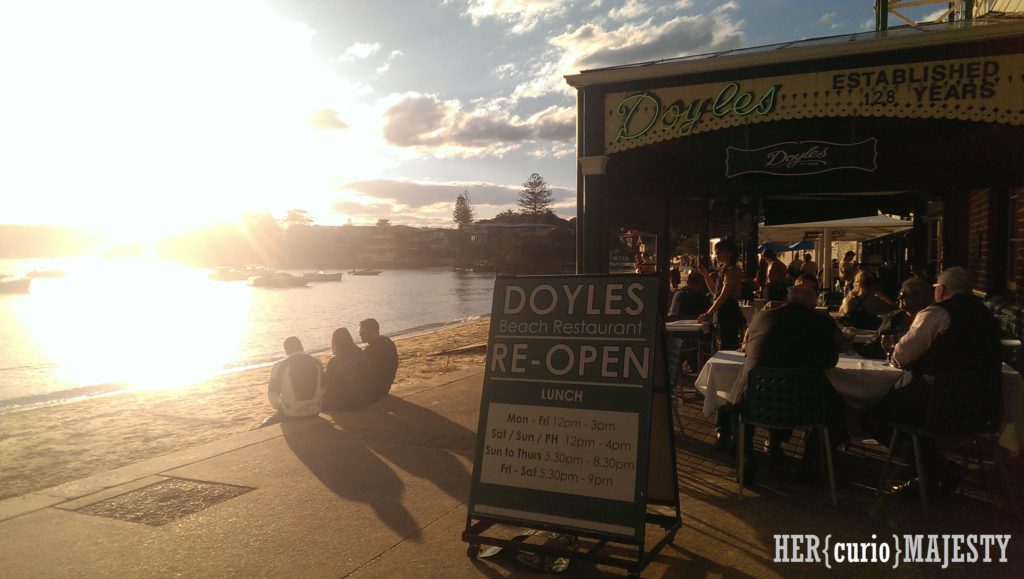 Or you could have a sit-down meal at the famous Doyles Restaurant. Doyles is a well-known restauranteur name in Sydney, if not Australia, and this one on the beach was the Doyles dynasty’s first seafood restaurant. Est 1885. 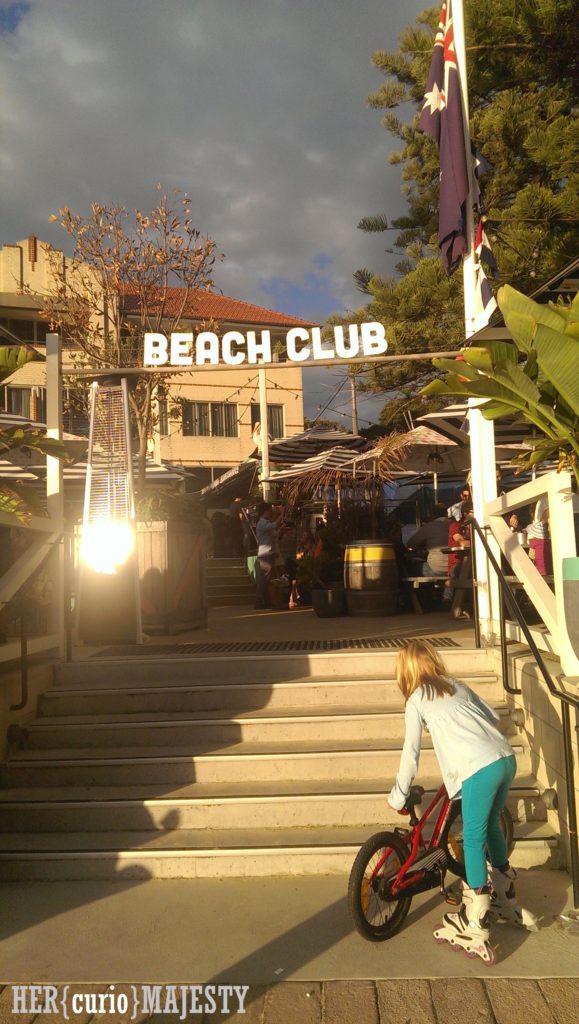 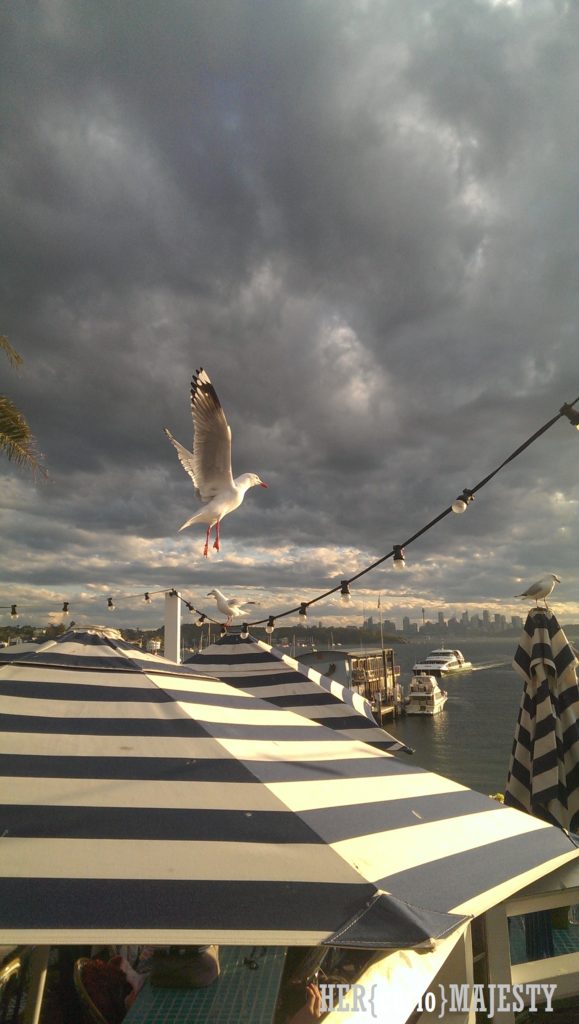 We went to have a drink at the Beach Club, otherwise known as the Watsons Bay Hotel, next to Doyles. It was a very chillax and lively beachside club, something about it felt like it was carved right out from a US college movie, both L & I liked it very much. 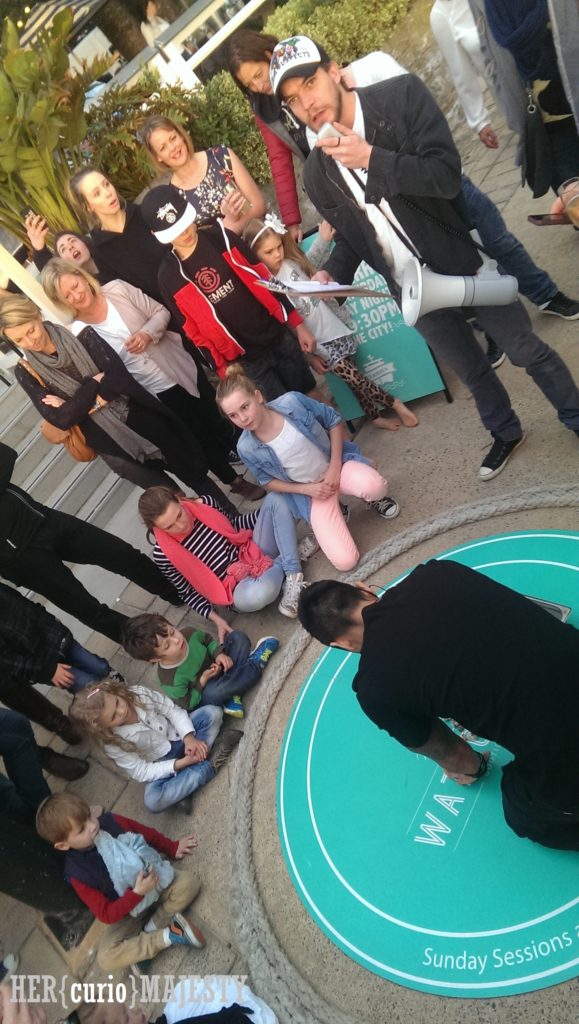 We even took part in a hermit crab race! There were about 30 crabs to choose from, entry was $5 per crab and the winner could take home $50. That’s pretty genius of a business model haha. The rule is simple, the first crab that touches the rope wins.

Unfortunately, my #29 crab, “The Queen”, didn’t even bother coming out of her royal residence of a shell. My first hermit crab race ended rather uneventfully. 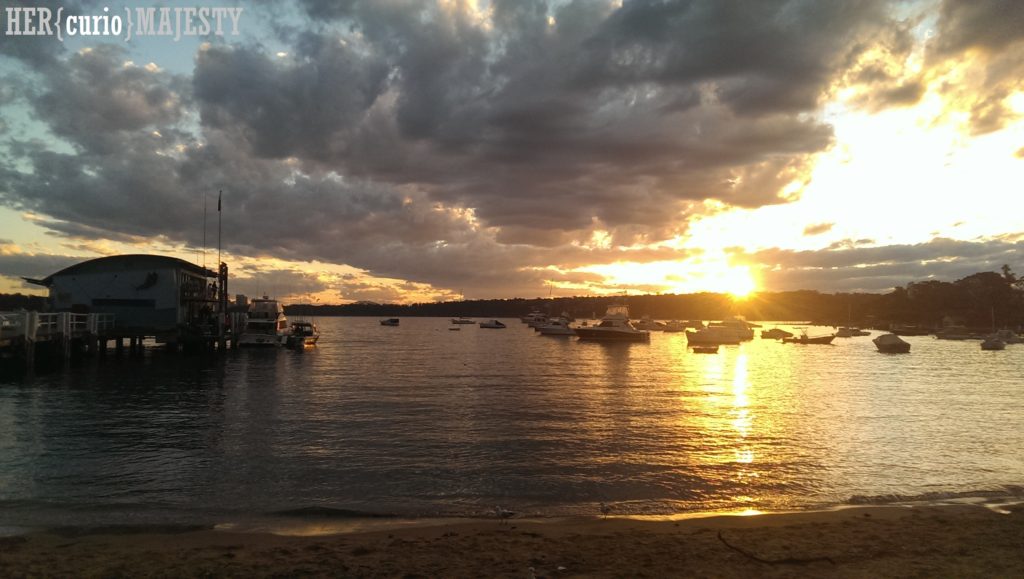 Do I love this place? Wholeheartedly.

Do I think this is a “must-go” for first-time Sydney tourists? Depends. Why? Everyone has different travelling styles: some like to tick the boxes and some like to stay off the beaten track. I still remember my excitement when I first saw Bondi Beach; and the fun times we had bike-riding at Manly Beach and up the North Head. Compared to the internationally renowned Manly Beach and Bondi Beach, Watsons Bay offers a less touristy and small-town alternative for a taste of Sydney’s beach-side community. It really depends on what you wish to get out from your trip and how much time you get to spend in Sydney. To me, Watson Bay would best be enjoyed

Truth be told, every single beach in Sydney that I have been to is beautiful and spirit-lifting. Forget about retail therapy, when in Sydney, try beach therapy!