I’m sure everyone’s familiar with this situation: A group of friends hanging out, dinner time comes, no one can decide what to have for dinner…and then one person would say, “Pick a cuisine!”

This was exactly what we did today. We picked Spanish – and Bodega came to mind. Luckily, when we rocked up at 7pm-ish on a Saturday night, the place was only 3/4 full and we got a table straight away. I was totally blown away by the food. It’s now my favourite Spanish restaurant, although the food’s very different than the usual Spanish tapas places we have in Sydney.

What I loved: The food. The service. 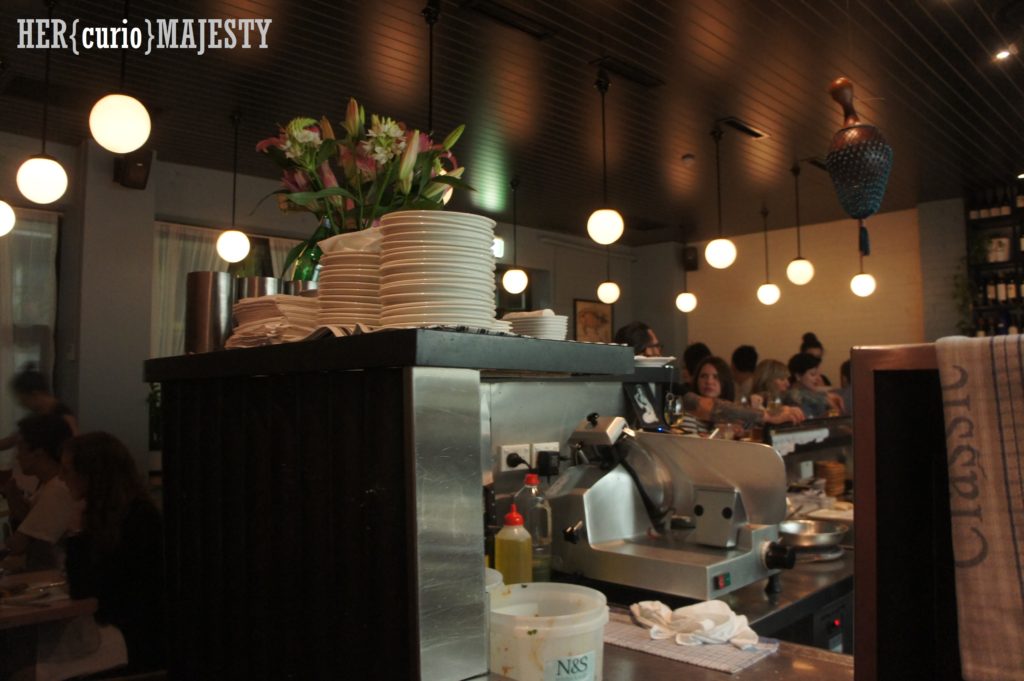 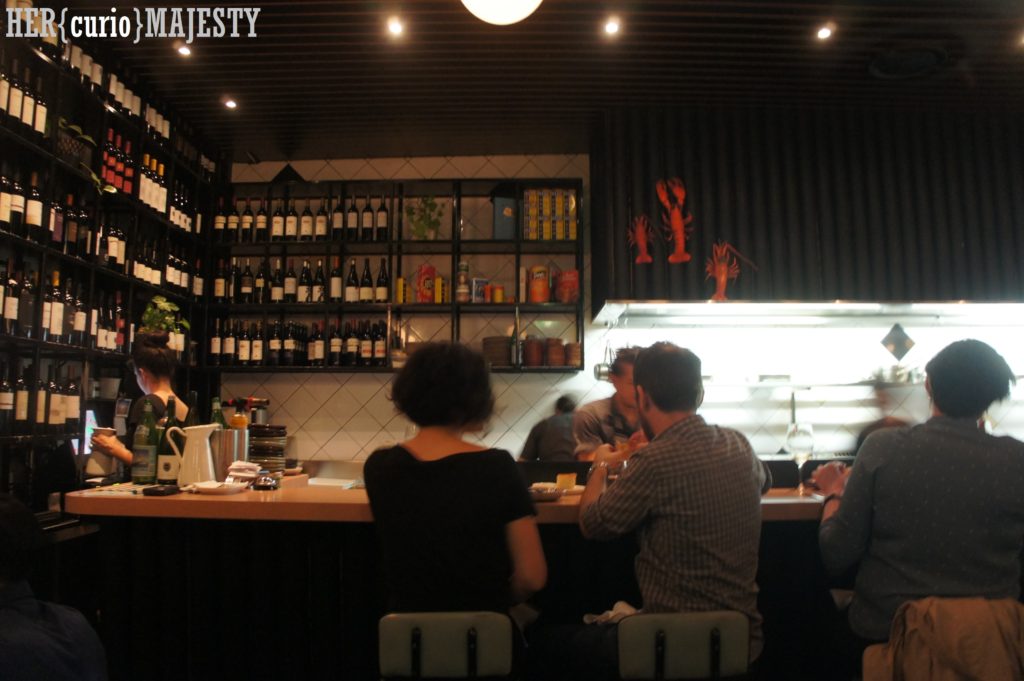 This is the front section with the bar seats. It was pretty much all filled up when we got there. 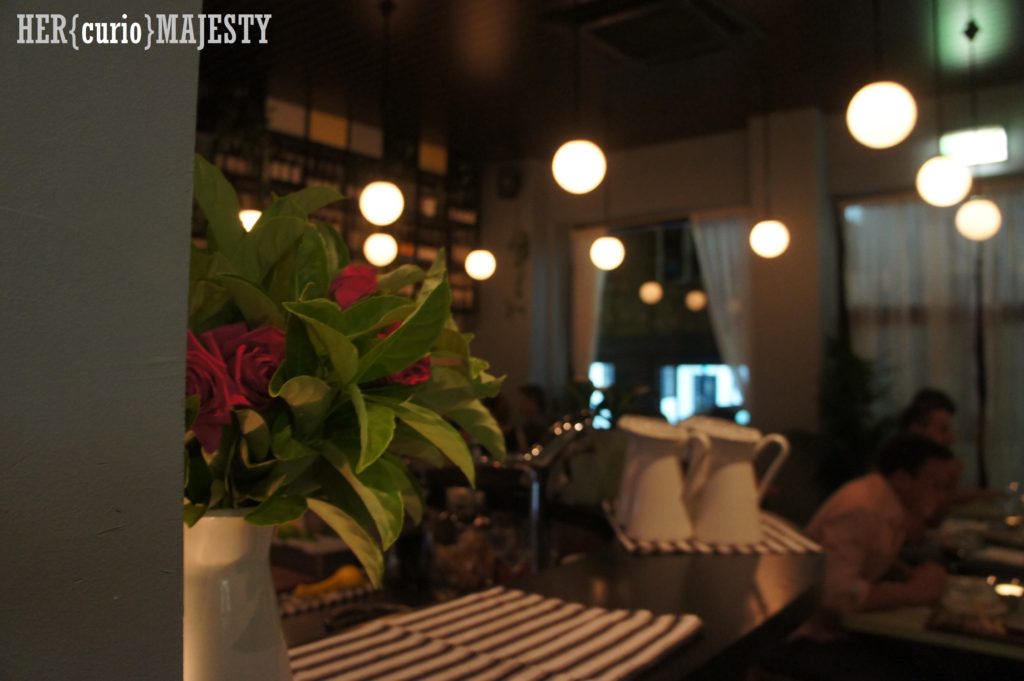 Just when I was wondering where we would fit, we were led to the adjoining room which could probably seat another 25 people. 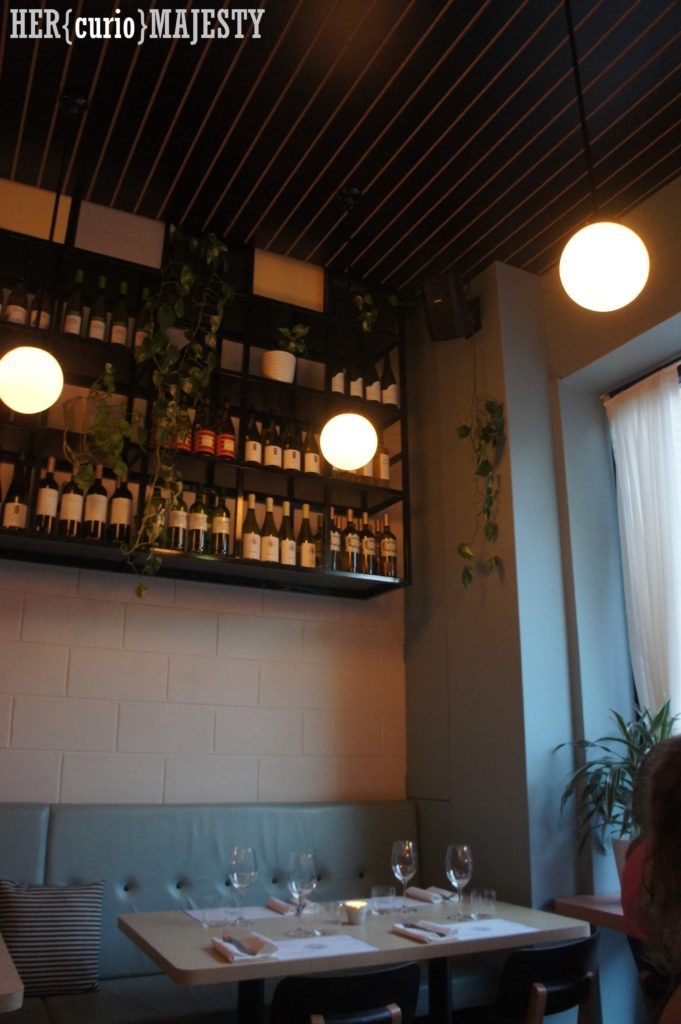 A corner of the second room where we sat. 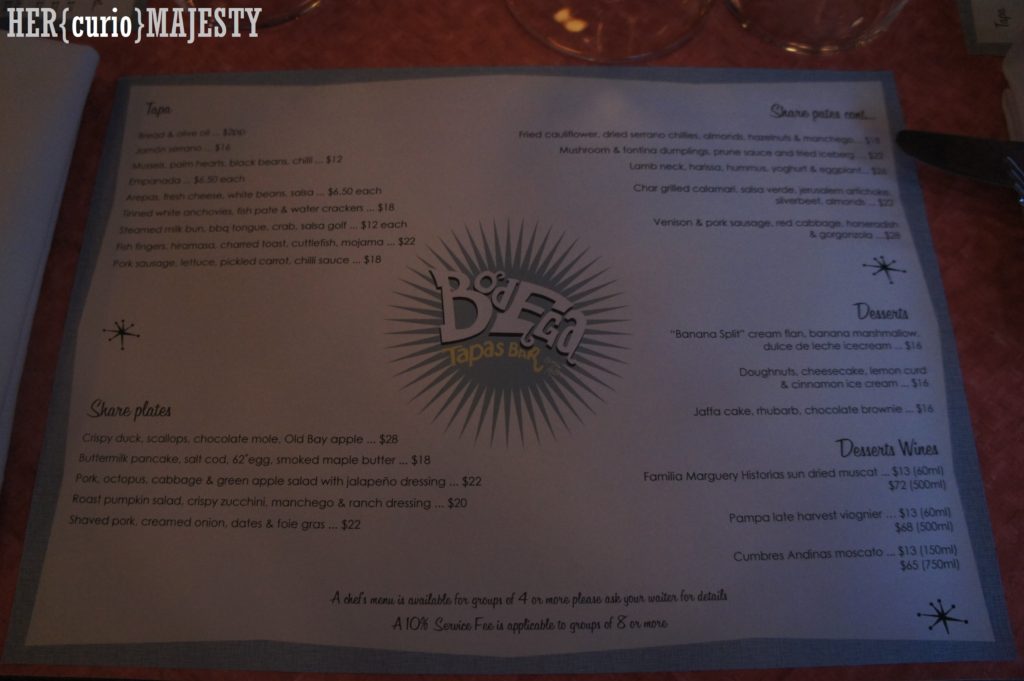 As you can see, it’s not a big menu so everything fits nicely on one page like this. What we thought was a clever touch was the use of these menus as the placemats. We actually referred to the menu several times during our feast just to refresh our memory of what were the dishes made up of. 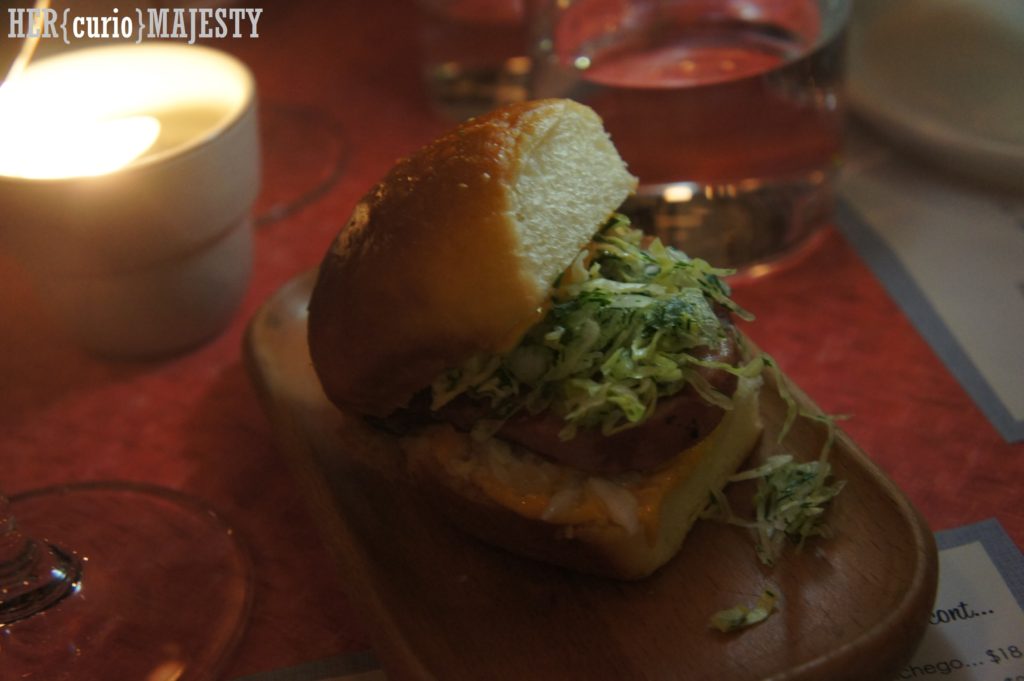 Steamed milk bun, bbq tongue, crab, salsa golf, $12 each. We ordered one to share among the 4 of us, just to have a taste. It was a little challenging cutting it into 4 pieces, but it’s doable.

The bun was heavenly soft, the flavours of the bbq tongue balanced just right with the other ingredients. Even though it was an absolute delightful bite, the price’s way too steep for a tiny bun. Sam reminded me that it’s very similar to the pork bun we had at Ms.G’s (which was “only” $6 each). 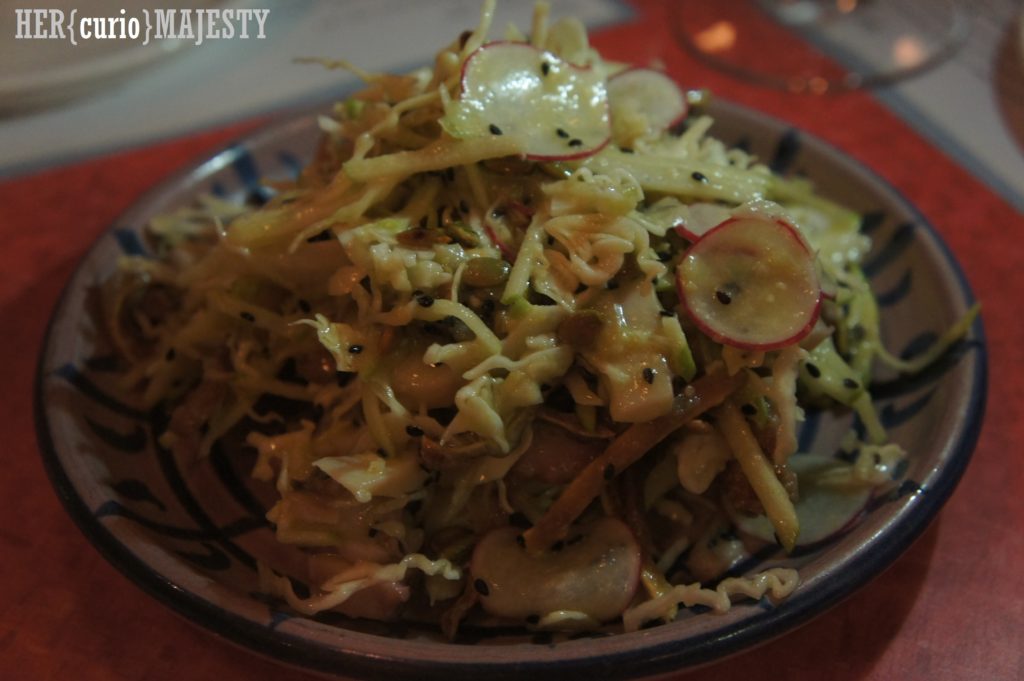 Pork, octopus, cabbage & green apple salad with jalapeno dressing, $22. I saw the waitress giving this to another table as I walked in, and I immediately decided that I must have this tonight. It turned out that it was not only appetising to the eyes, but also to our satisfied tummies.

The pork was thin pieces of crackling, the octopus was the chunky real deal, the cabbage was refreshing together with the subtle shreds of green apple, and then they topped it all up with the tangy jalapeno dressing…Mmmm just like heaven. Out of the 4 of us, 3 (including me) voted this the best dish of the night. 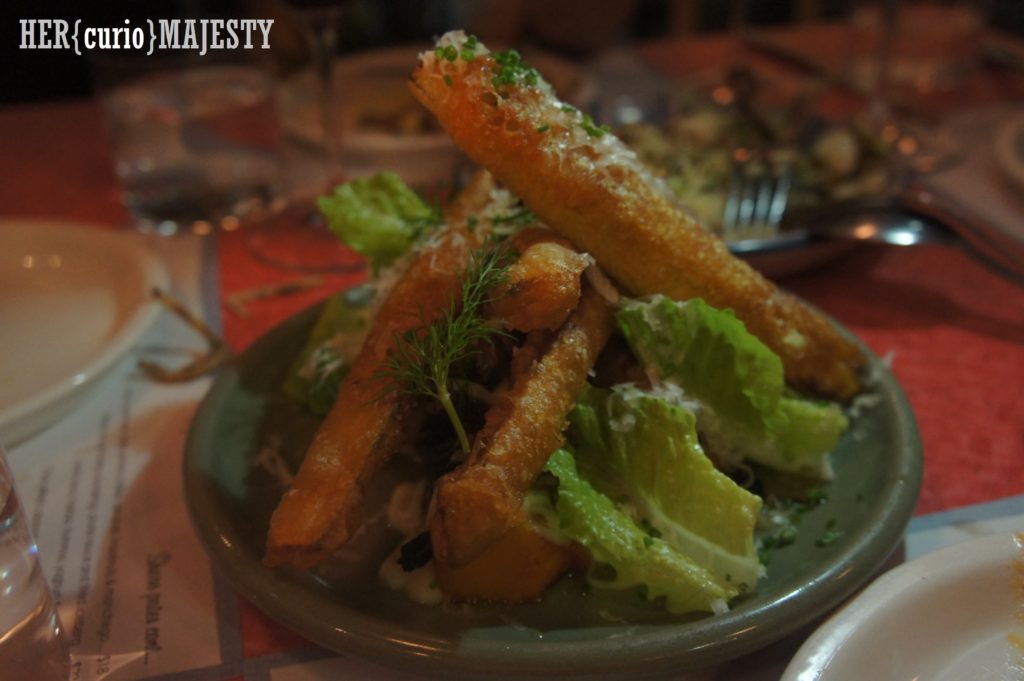 Roast pumpkin salad, crispy zucchini, manchego & ranch dressing, $20. Jen and I saw the table next to us having this and we were immediately drawn to the deep-fried zucchini stacked nicely on the salad. Even though I felt the zucchini itself was way too greasy (too much batter, not enough zucchini), the roast pumpkin saved the dish. 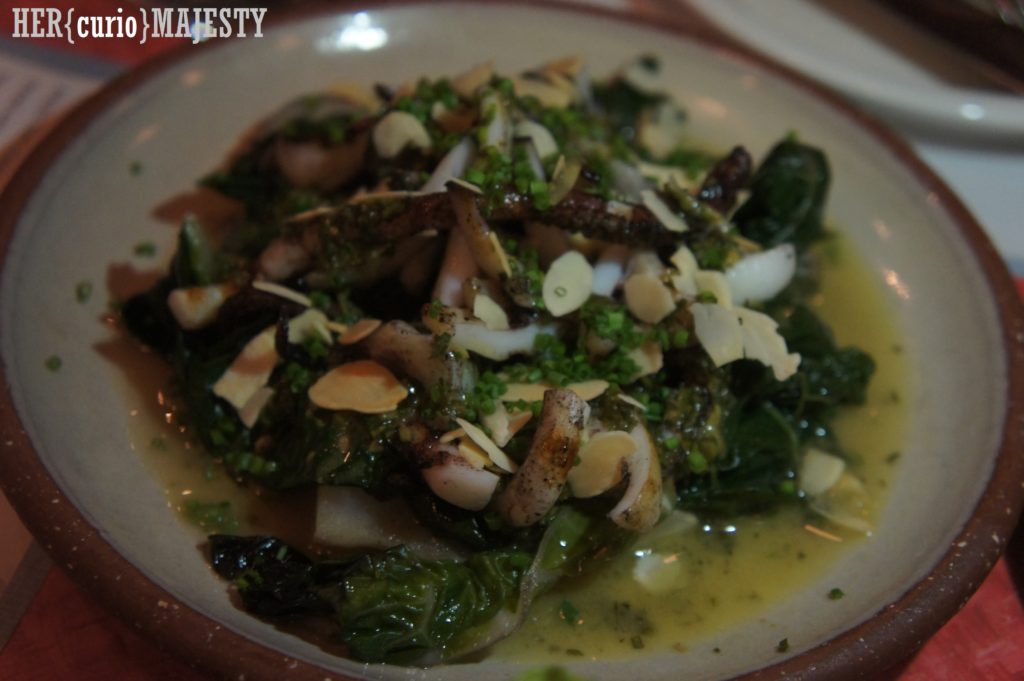 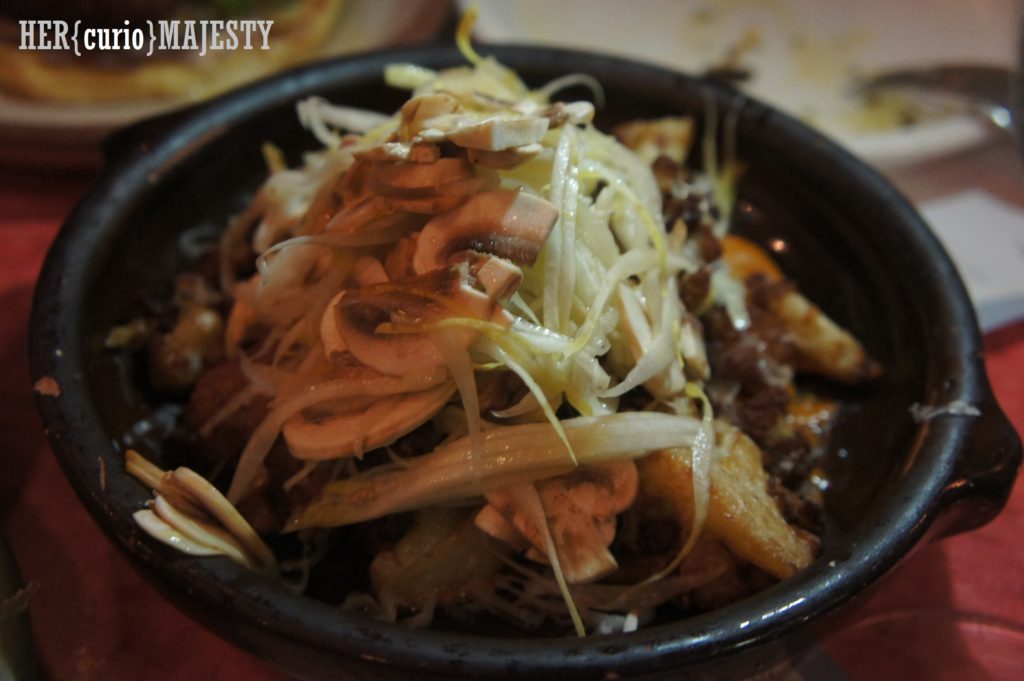 Fried cauliflower, dried serrano chilies, almonds, hazelnuts & manchego, $18. This was my runner-up dish of the night. Fried cauliflower almost never goes wrong, but it’s the seasoning that totally elevated it. 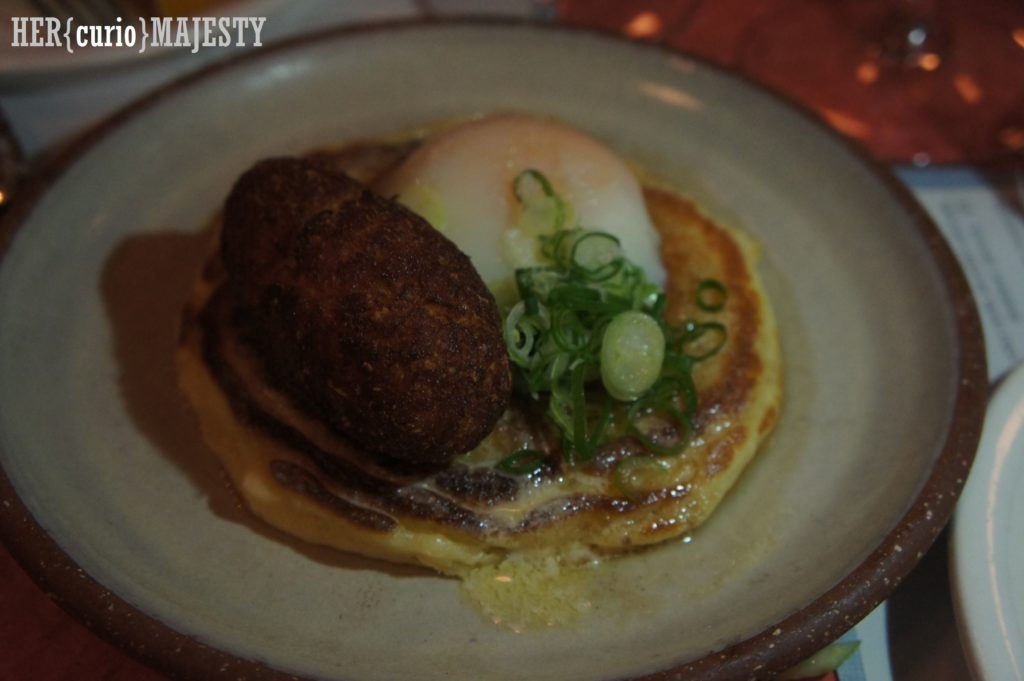 Buttermilk pancake, salt cod, 62 degrees egg, smoked maple butter, $18. It’s not something that I would normally order, but it’s just too interesting to pass up. This was reaffirmed when the waitress let out a “that one’s amazing” comment when we ordered this.

By the way, our waitress was very attentive and friendly. 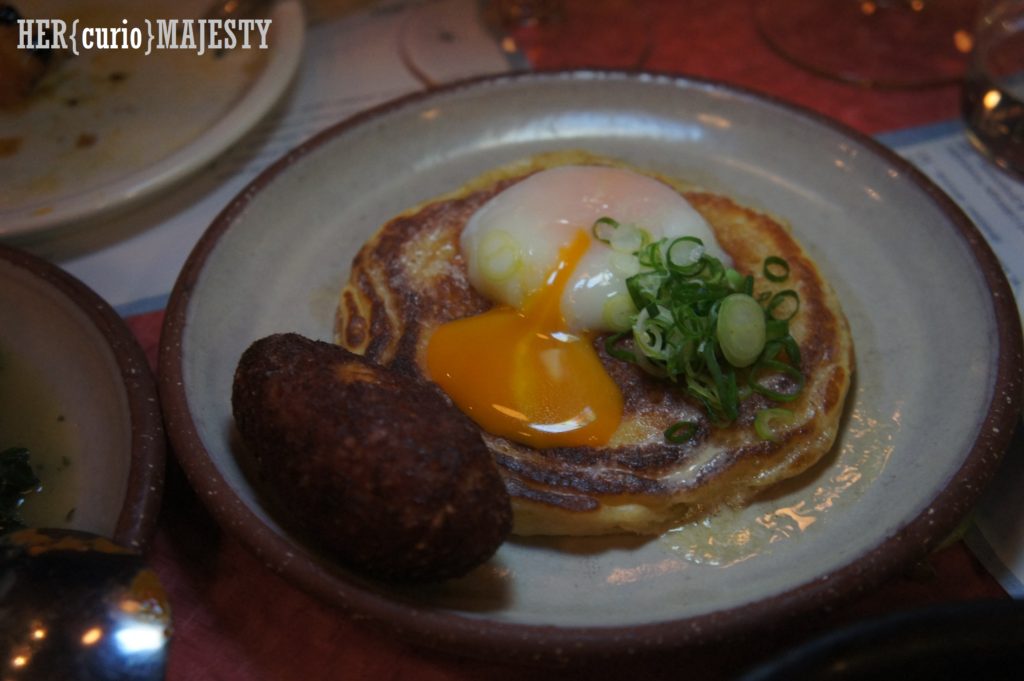 The gooey egg yolk was just too luring so I have to show this photo again. We were told that it’s to be enjoyed “as messy as possible“.

The verdict? Mmm, I definitely enjoyed it and was glad that we ordered it, but it’s in my “been-there-eaten-that” bin and I wouldn’t order it again. 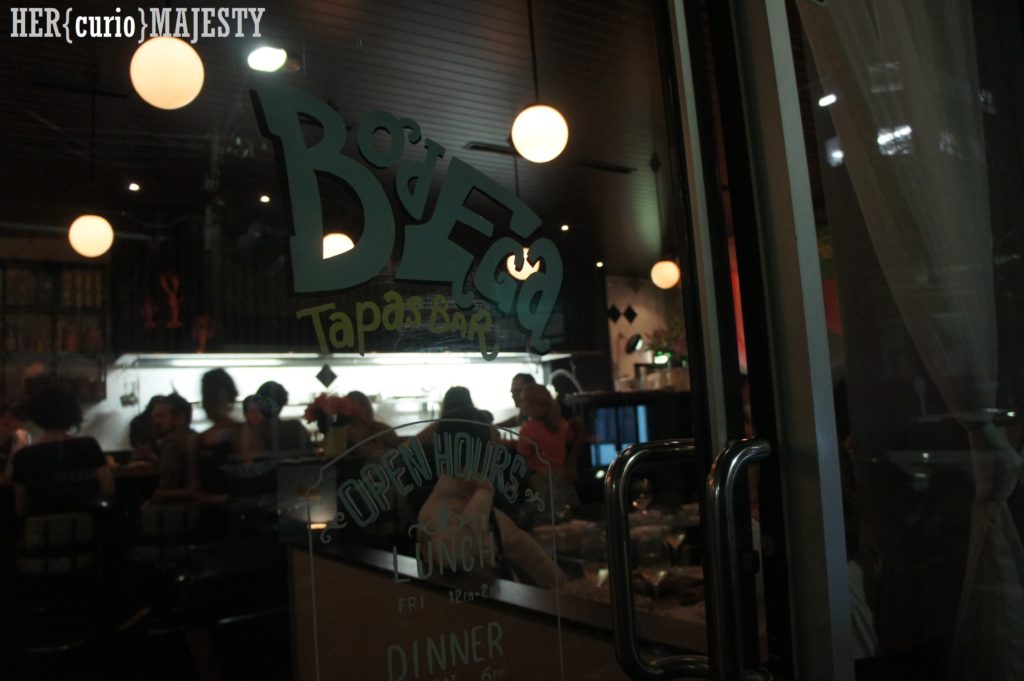