As a homosapien living in the 21st century, Kualoa Ranch was by far the closest that I had ever gotten to the Jurassic era – Well, at least the Jurassic that Hollywood had created. That’s right, the Jurassic Park and Jurassic World blockbusters were filmed right here at Kualoa Ranch in Hawaii! 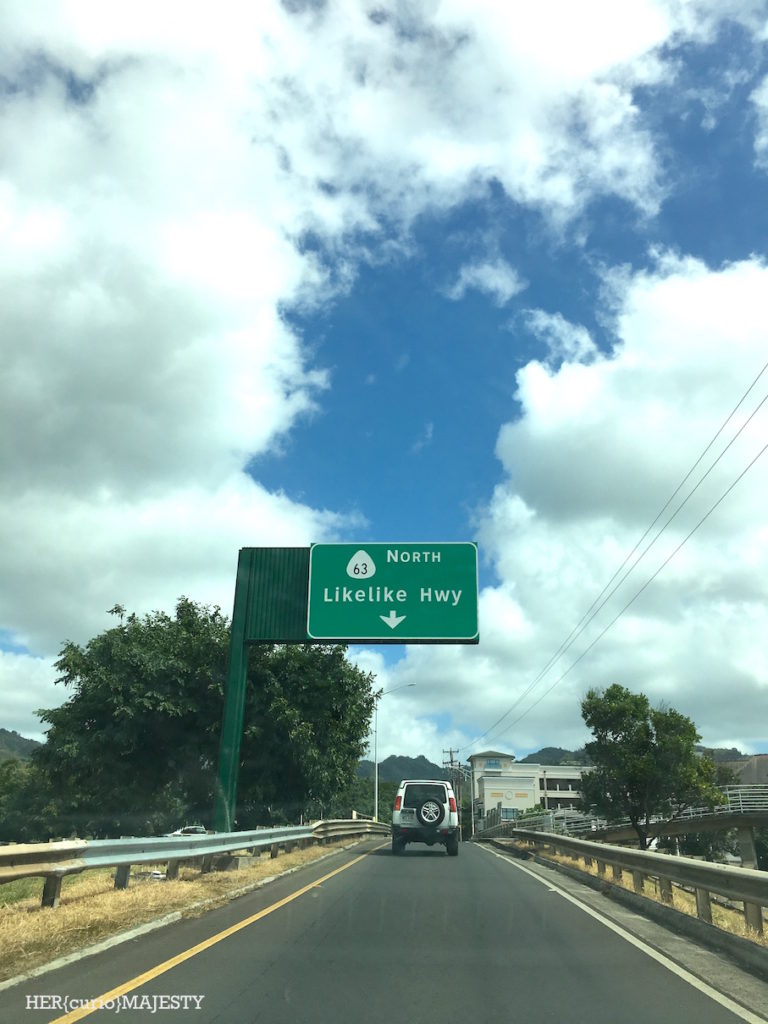 How cute is the name of the highway? Me likey likey.

We started our journey from Honolulu by first getting on the Likelike Highway, followed by the northbound Kahekili Highway then onto the Kamehameha Highway. I have to say, I really had fun trying to pronounce these Hawaiian tongue twister road names when I was pointing the directions to Mike. 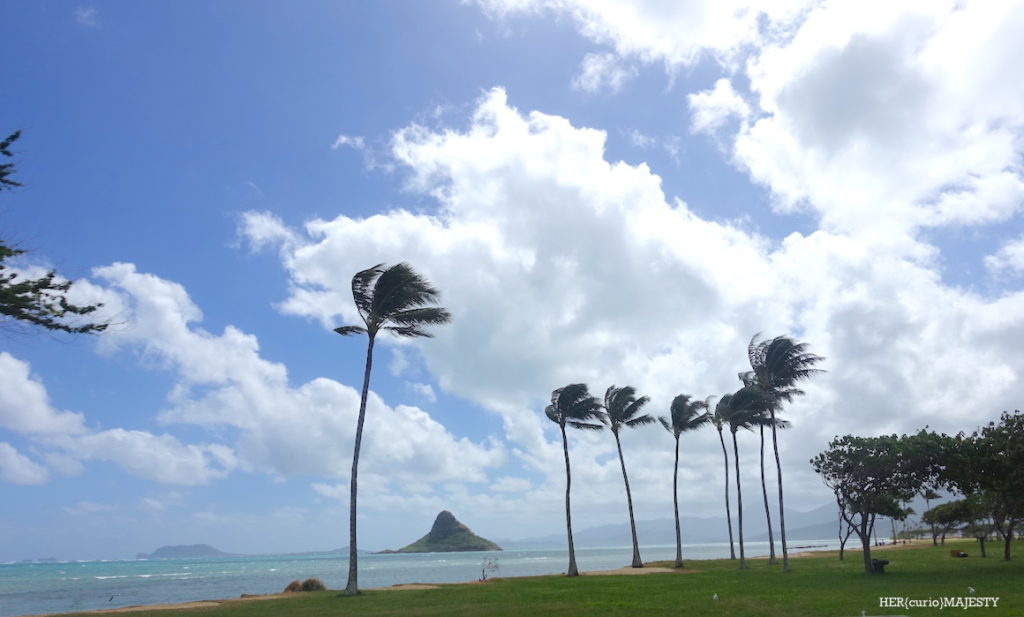 Just before we got to Kualoa Ranch, we were greeted by the Chinaman’s Hat (officially known as Mokoliʻi), standing humbly in the middle of the ocean. 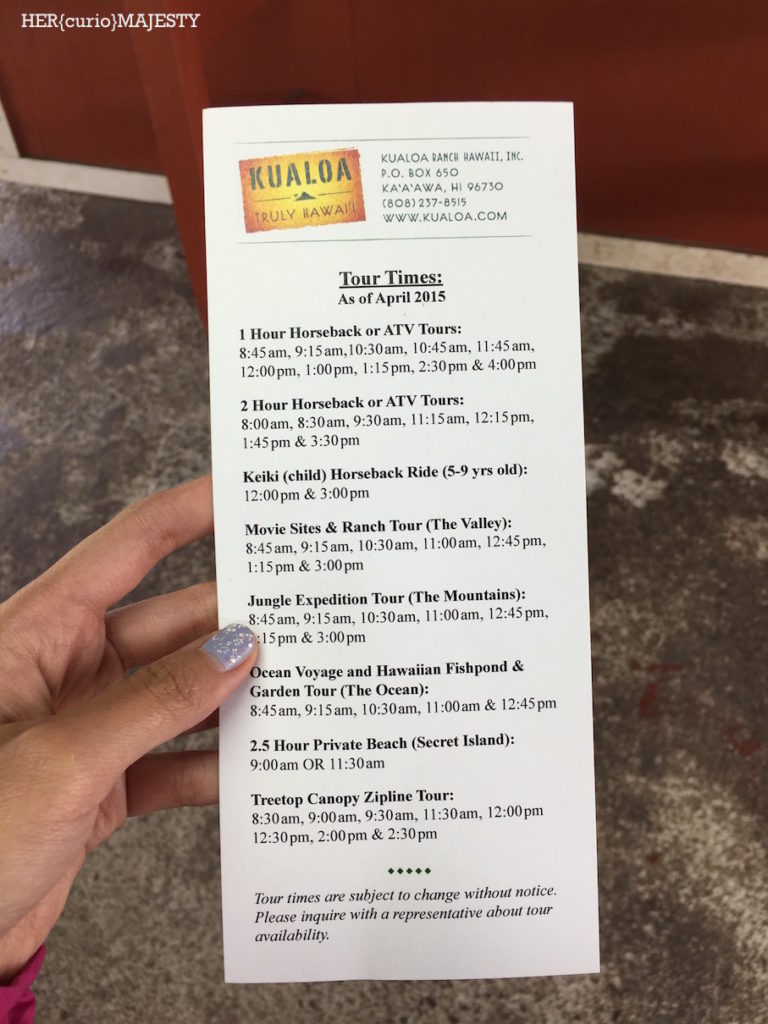 I wanted to keep our itinerary flexible so I didn’t make any online bookings for Kualoa Ranch. Unfortunately, the ATV tours that I was hoping to do were all full for the day! In fact, almost everything was full by the time we got to Kualoa Ranch at about 12:40pm. We managed to book ourselves in the last Movie Site & Ranch Tour at 3pm. Phew. 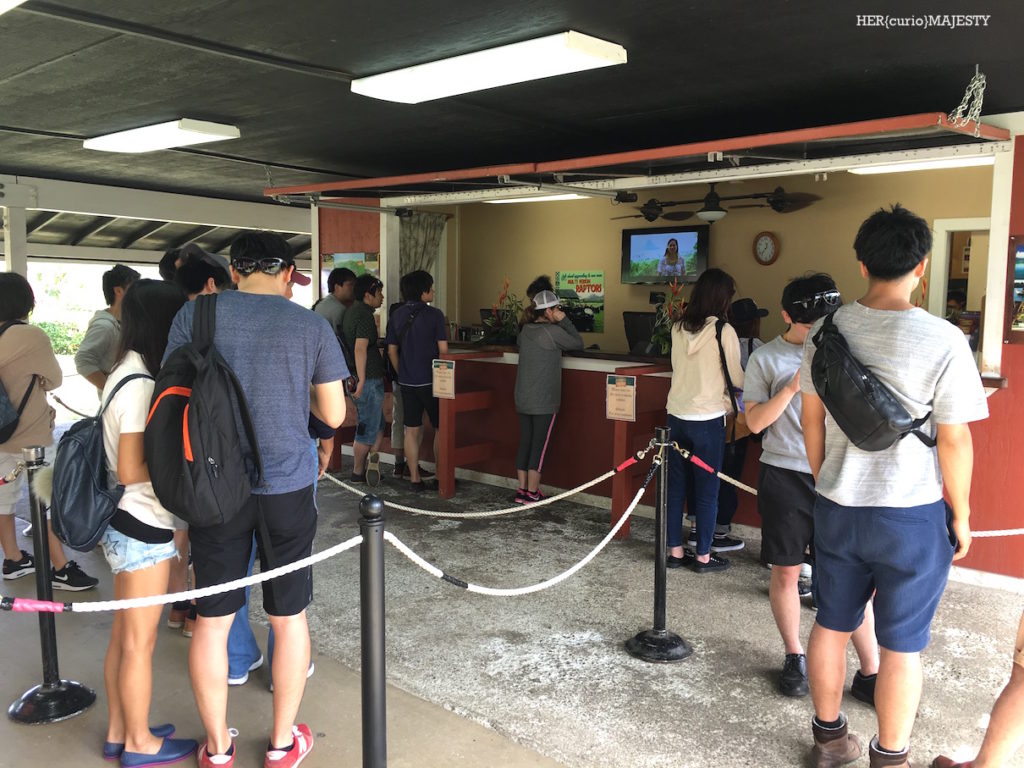 The ticket office at Kualoa Ranch

The lesson to be learnt here is…always book your tours in advance if you have a tight schedule or if there is something that you are dying to do.

With aplenty of time to spare, we went to look at the Chinaman’s Hat from the coastline. Wohoo beach time!

If you are game enough, you can hire a kayak to go around Mokoli’i or even hike the Mokoli’i. We didn’t do it but we saw people kayaking. You can find more information on Tripadvisor and Yelp. 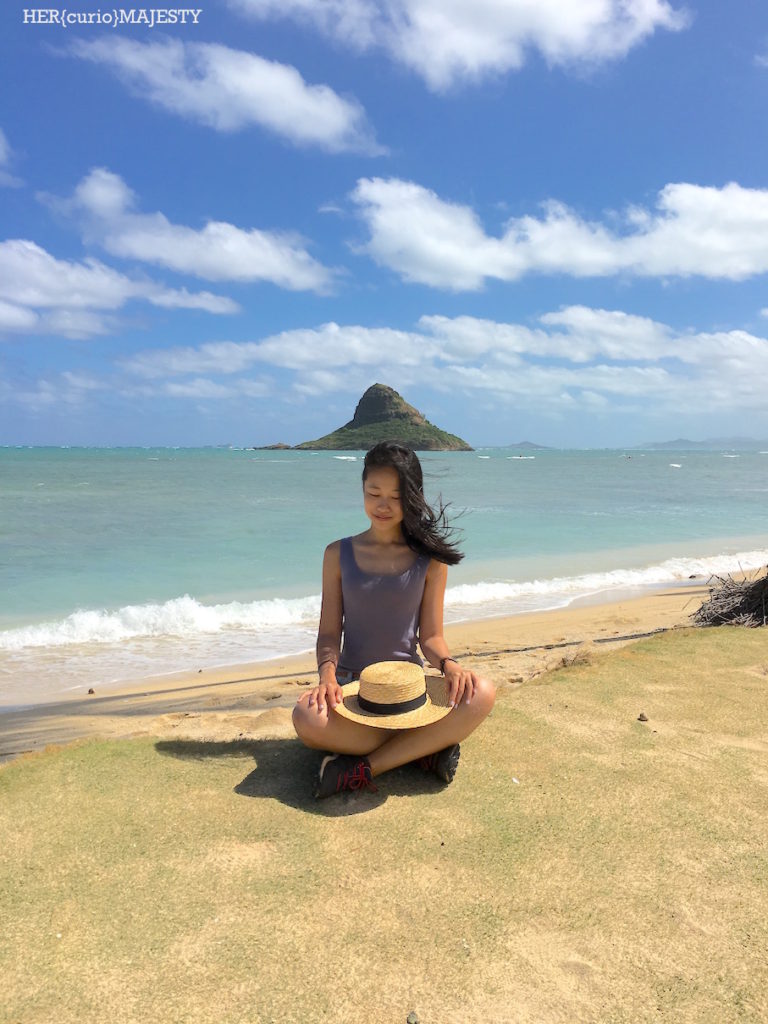 Instead, we just sat by the beach and soaked in the view.

Here’s a photo of me wearing the hat.

Tiny redhead birds jumping around and chirping. So cute. 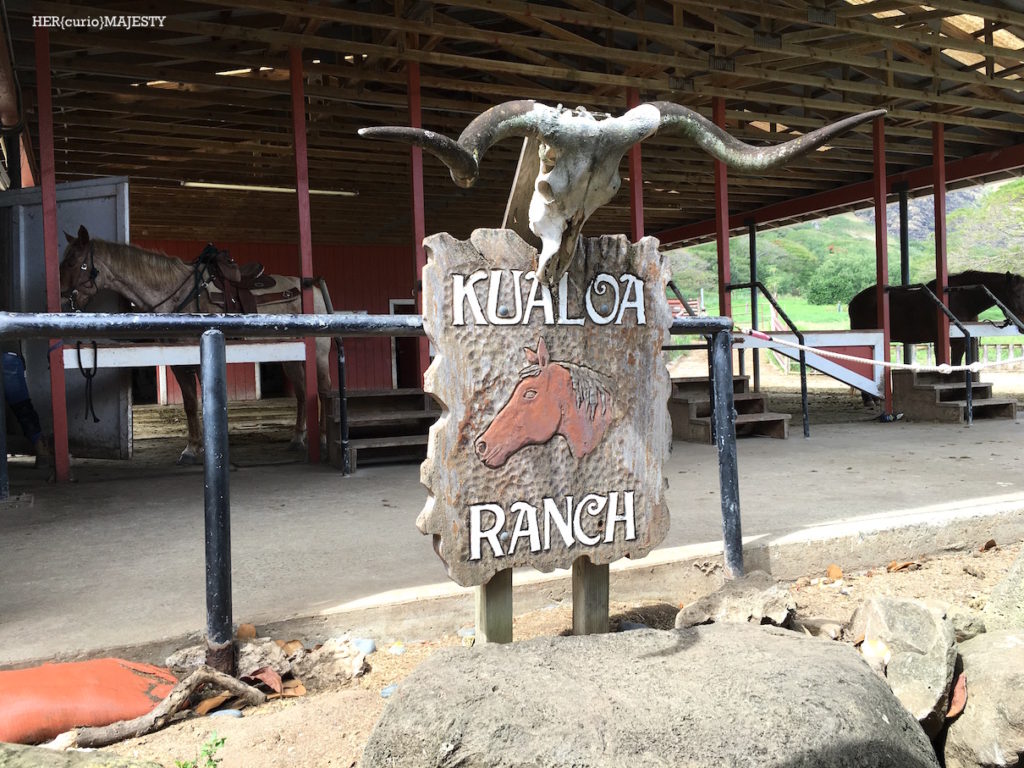 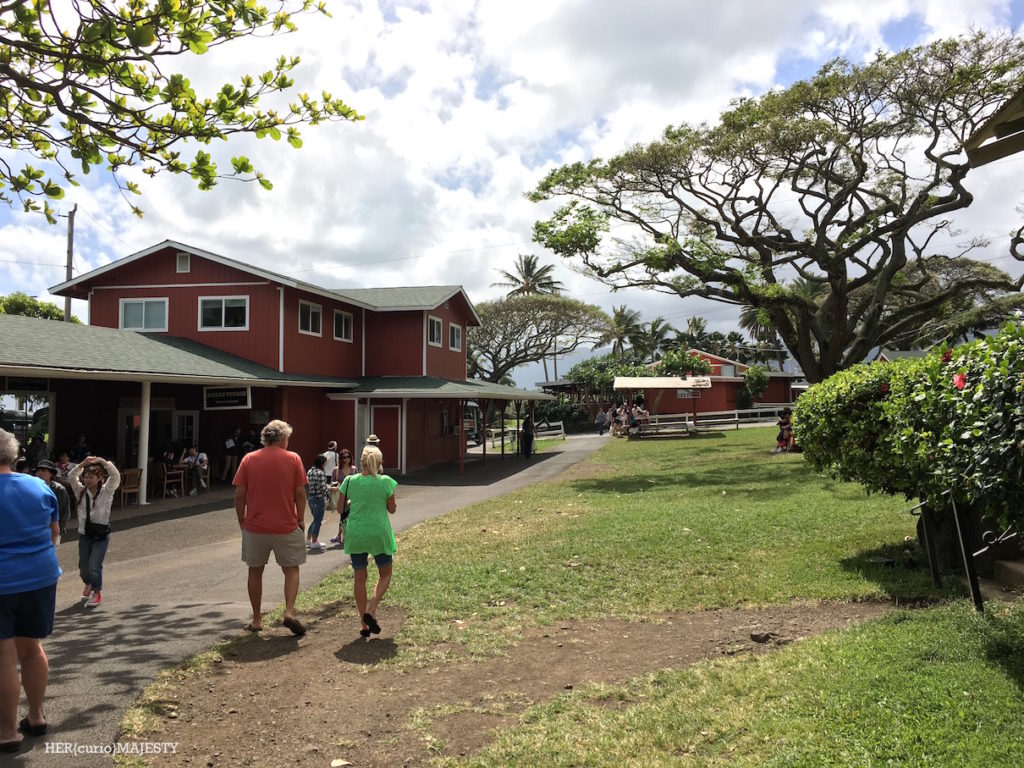 Each tour had a different waiting shed clearly marked with the tour name. There was no seat allocation for the tours so the seats were on a first come first serve basis. 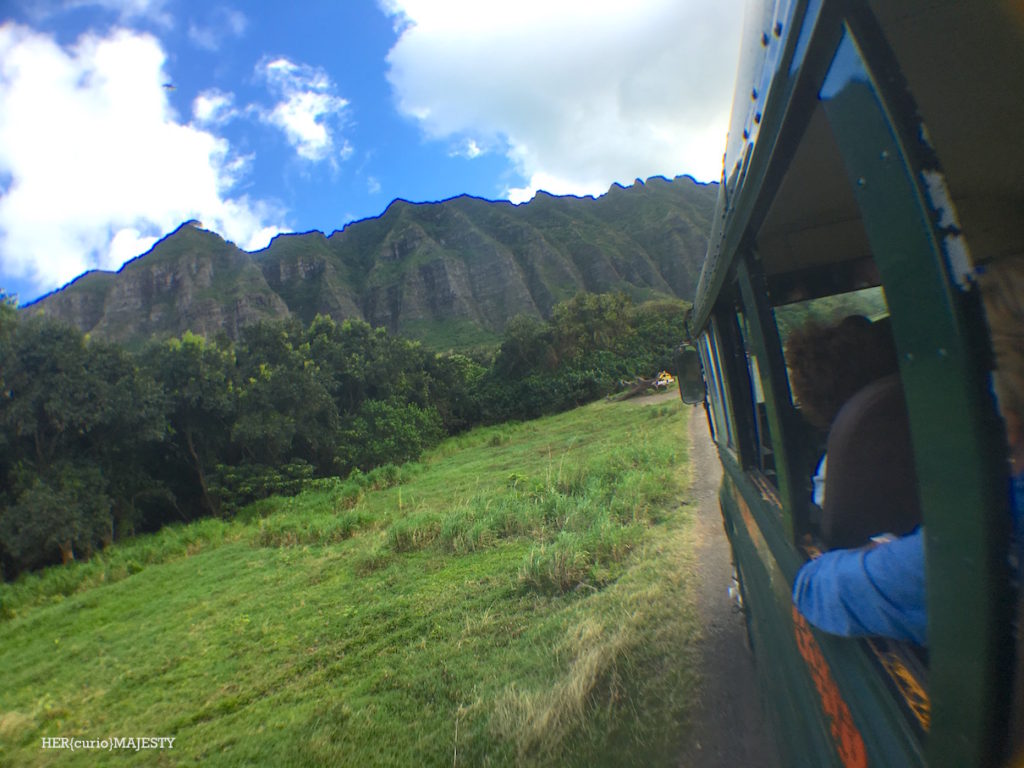 We picked the seats on the left side of our bus and I was pleased that most of the scenic points can be comfortably seen on this side of the vehicle through the glassless windows.

The duration of the Movie tour was 1.5 hour, and there was a tour guide on the bus who provided informative and friendly narrative of the history of the ranch and the movies that were filmed here. 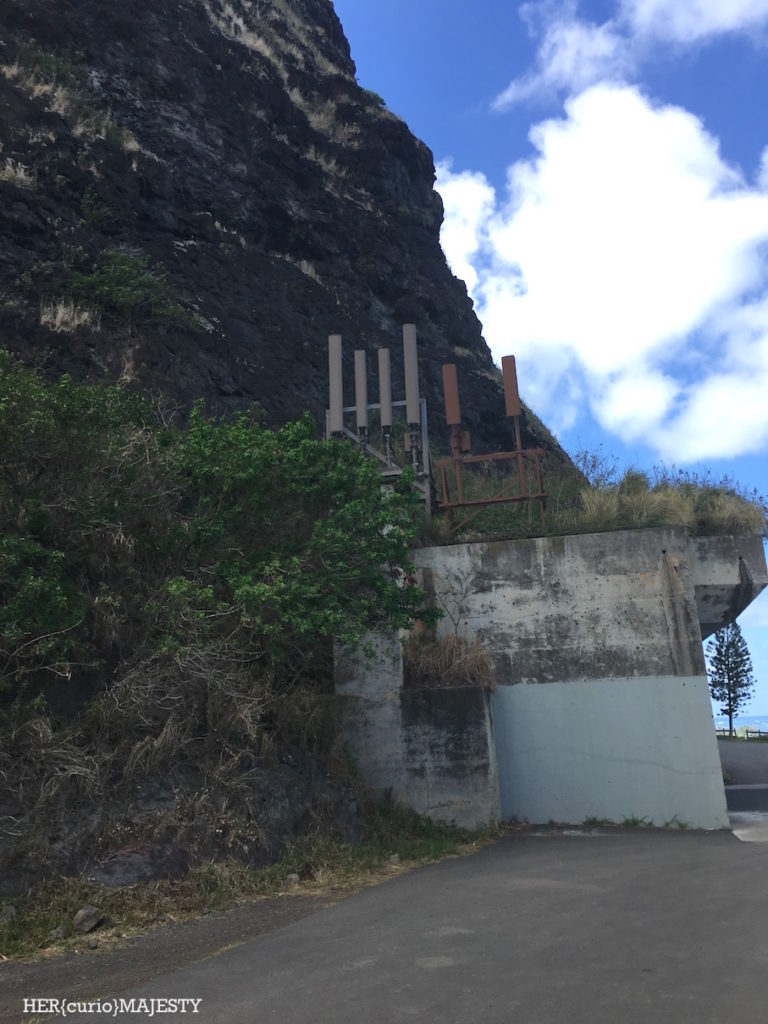 Our first stop was the WWII military bunker – actual bunker used by the U.S. military when they occupied the Kualoa Ranch as their Airfield during the war.

I really liked how the tour was structured, because it wasn’t just a bus tour where you see everything from afar – they actually let us walk and take a self-guided tour inside the bunker. Amazing. 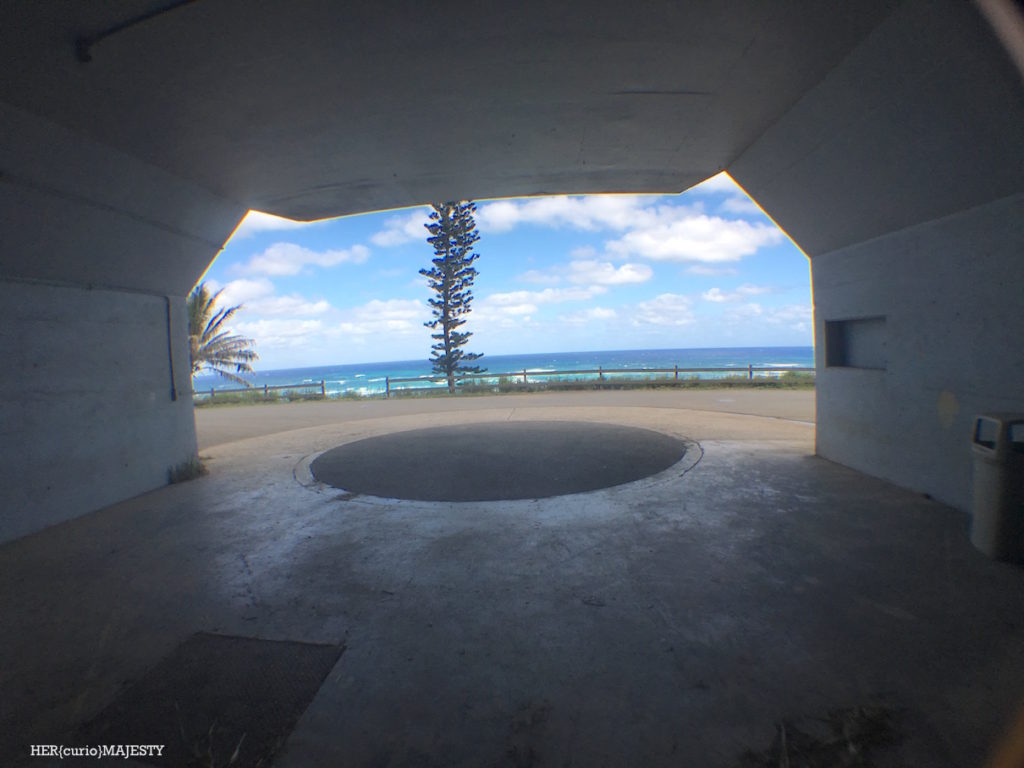 How depressing it must have been to be caught in the horrible war and trapped inside this dark bunker, with the beautiful as ever blue sky and ocean waving in your face. 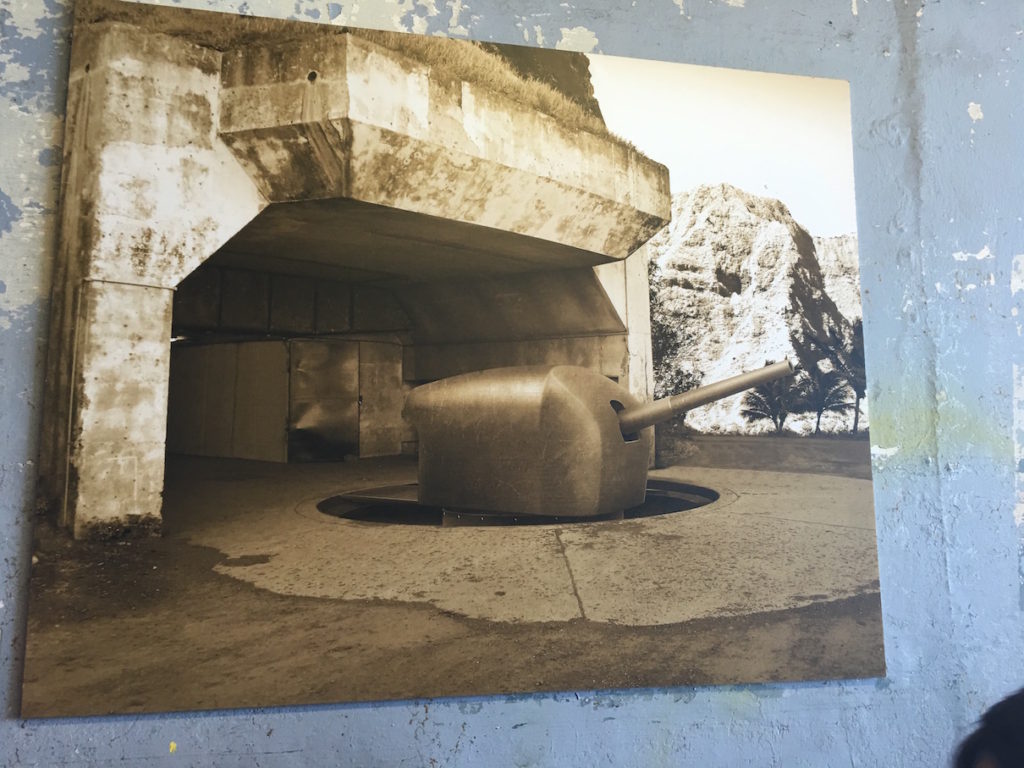 Actual WWII cannon outside of the bunker 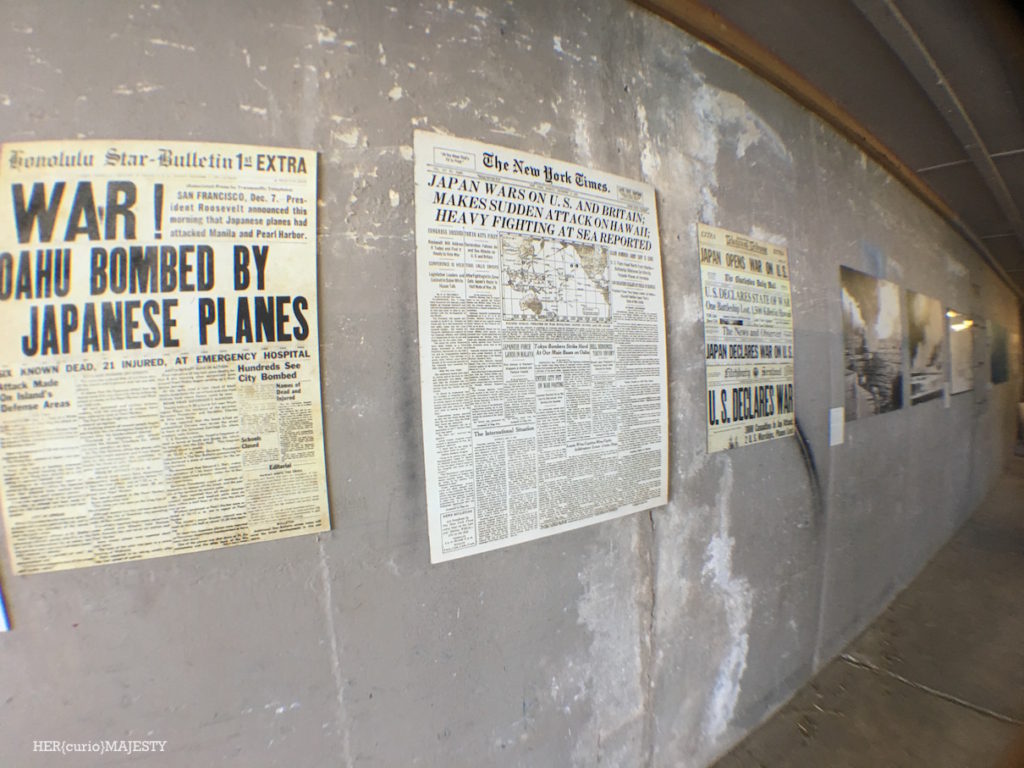 After WWII, the ranch was returned to the owners. The 4000-acre private nature reserve has been used as a working cattle ranch since. 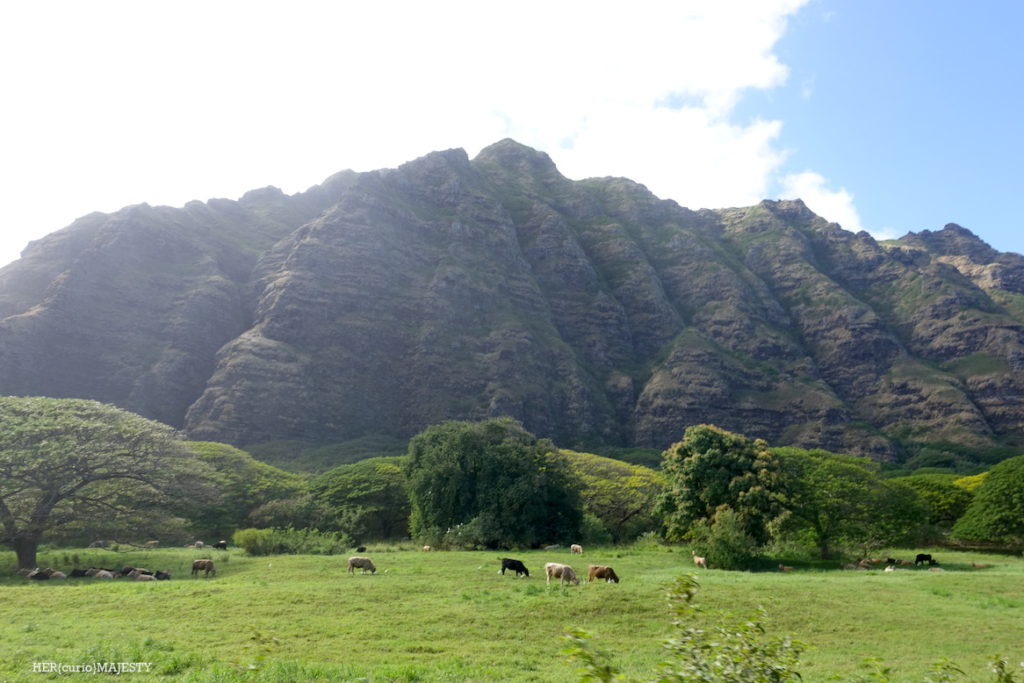 The mountain range was magnificent. 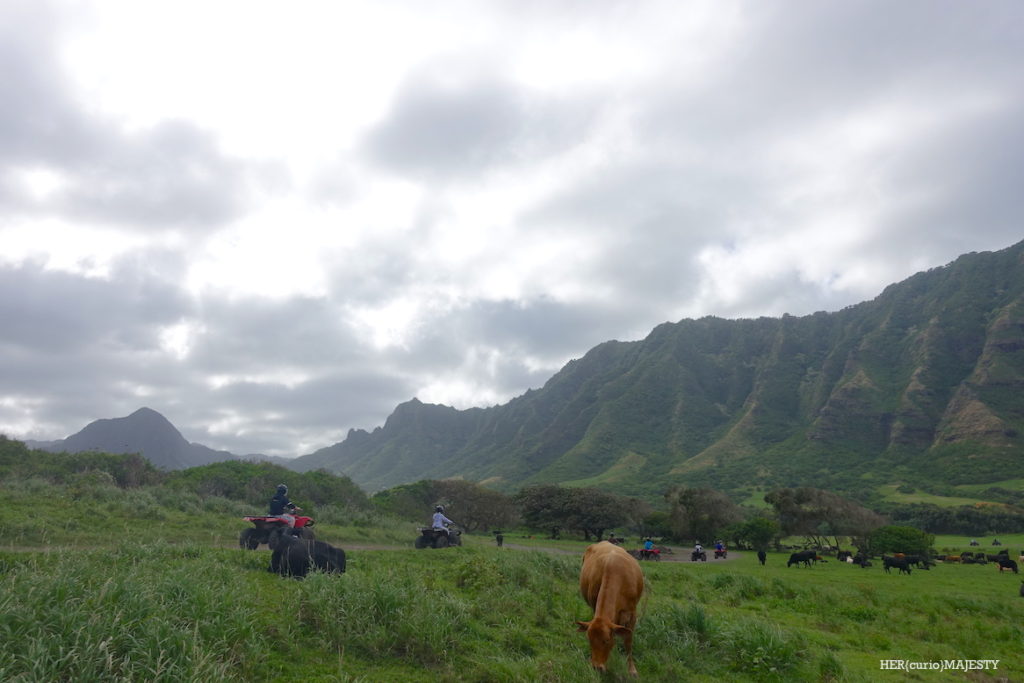 We came across the lucky people that got to go on the ATV tour…Oh well our movie tour was great too! 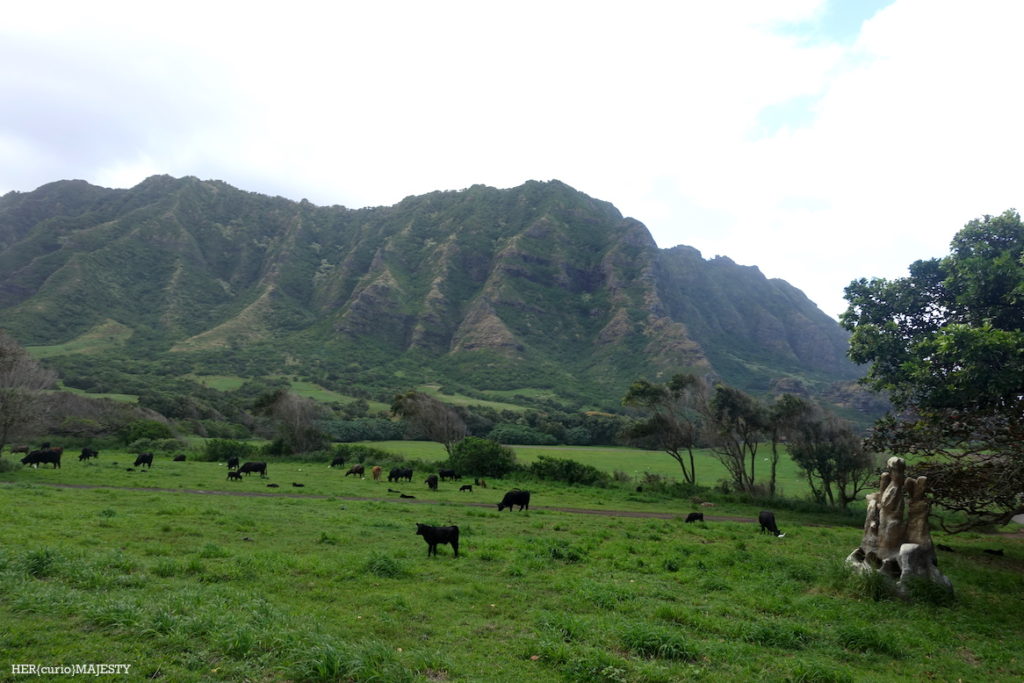 At the movie tour, we drove past where they filmed Jurassic Park; Godzilla’s footprints; Windtalkers; 50 First Dates; You Me & Dupree; Mighty Joe Young; Hawaii Five-0; and LOST.

I only knew Jurassic Park, Godzilla, 50 First Dates and vaguely You Me & Dupree. But it was still a very entertaining tour for me. 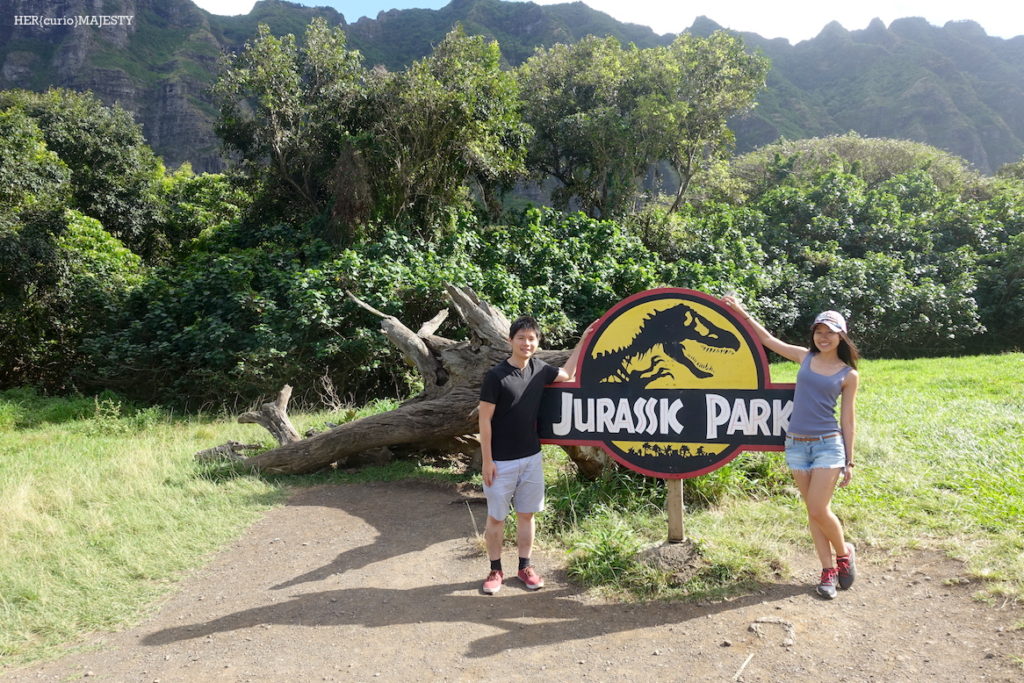 The tour guide took photos for everyone, and she even brought her dinosaur prop to take funny shots for all of us. It was the highlight. 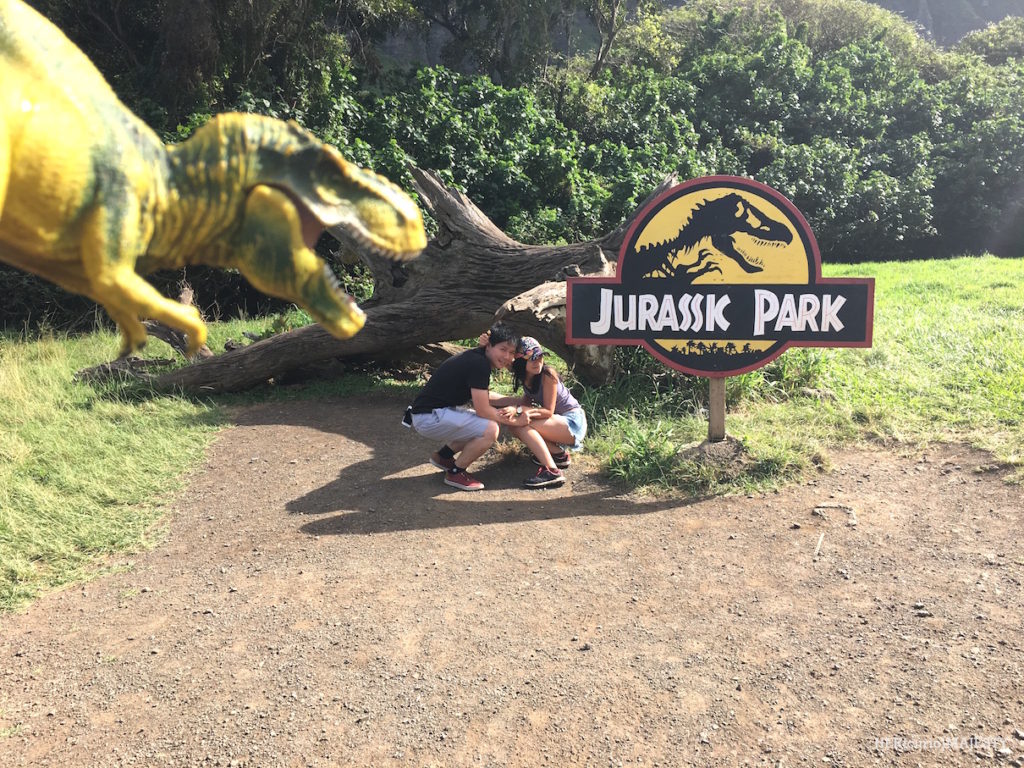 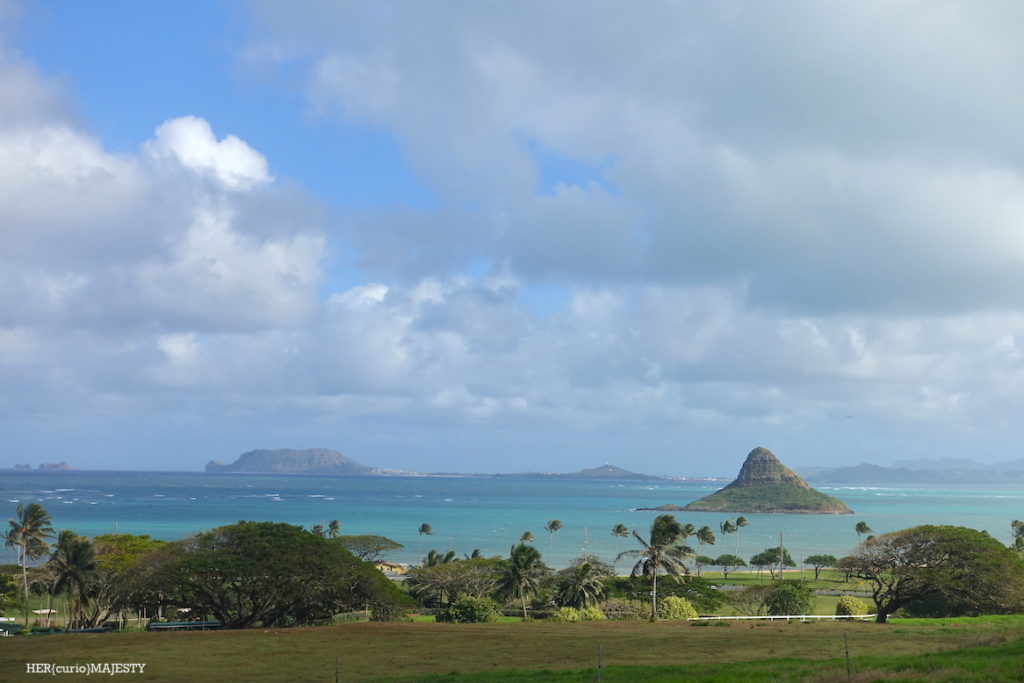 The view of Mokoli’i from Kualoa Ranch. Can you also see the turtle island in the background? 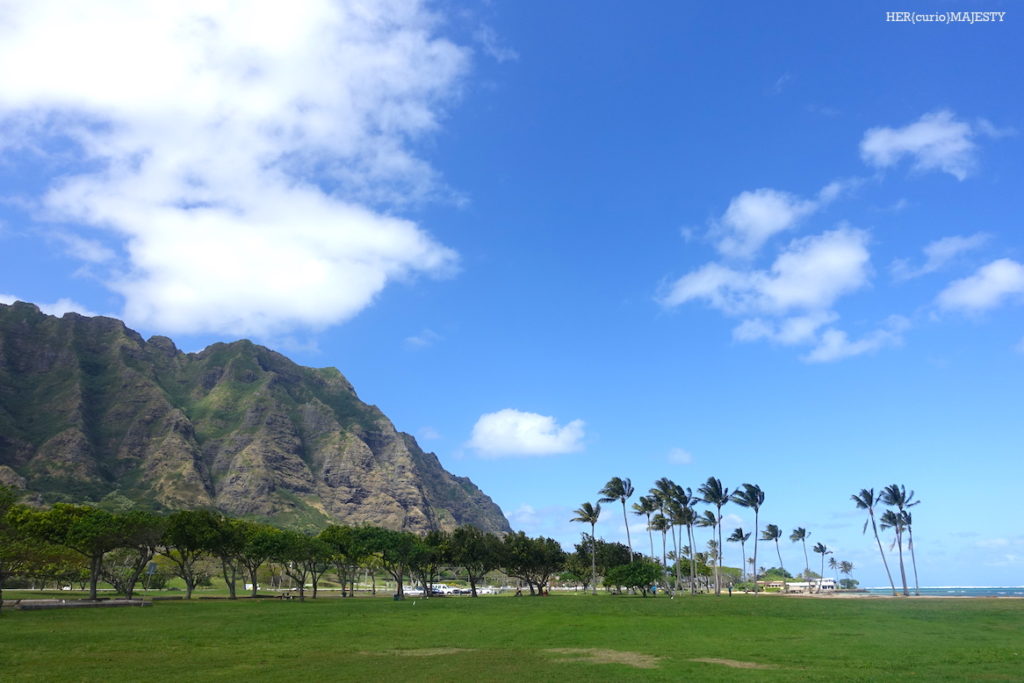 Don’t miss the opportunity to embrace the beauty of nature at Kualoa Ranch when you visit Oahu. All I can say is, the Hollywood movie producers picked Kualoa Ranch for their movies for a reason!