We finally went to Ms.G’s.

I had heard good things about this place, and I had expected it to be good since it’s been awarded one chef’s hat three years in a row from 2012. However, I had always put off coming here because: I always have my doubts when I see “Asian fusion“. As an Asian, those two words usually translate to “overpriced“, “small portion” and “unauthentic” to me — Fortunately, Ms.G’s was none of those things. I left Ms.G’s feeling utterly satisfied and very impressed.

What I loved: The food. The decor. 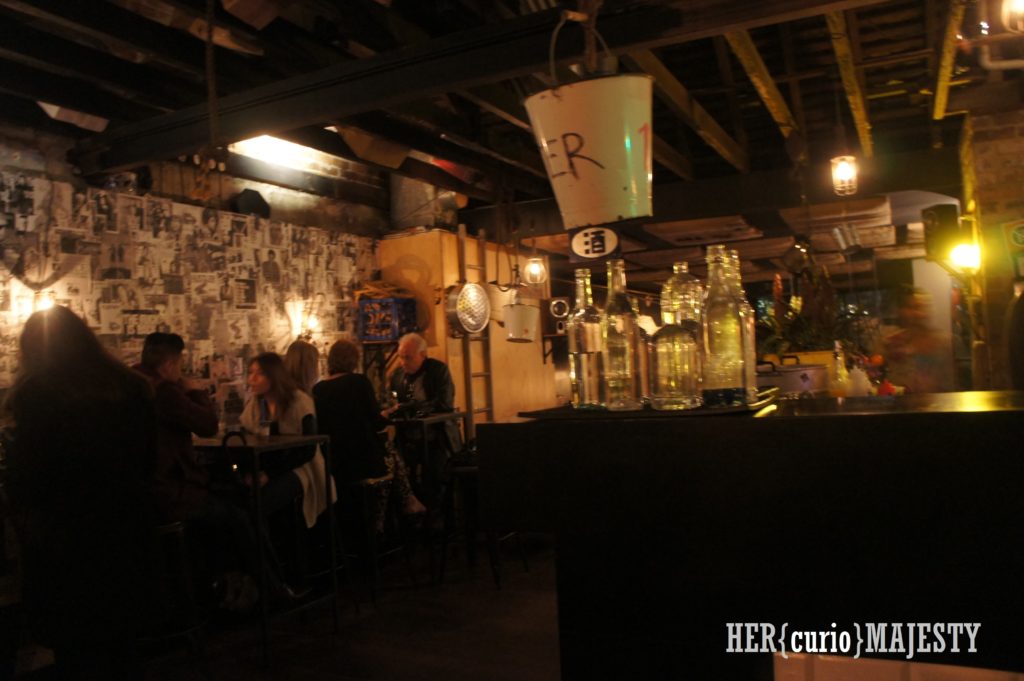 We got there at 6:30pm, and the place was pretty much filled up already with all the big tables gone. As our whole party hadn’t arrived yet, we were asked to wait at the attic bar, which was half empty at that time.

By 6:50pm, when we had everyone, we were told by downstairs that there’s gonna be a 1.5hr wait for a table at the restaurant and they would call us when it’s ready. Since we were lucky to have secured a table at the end of the bar that was just enough to fit the 6 of us, we decided to just have our food there. 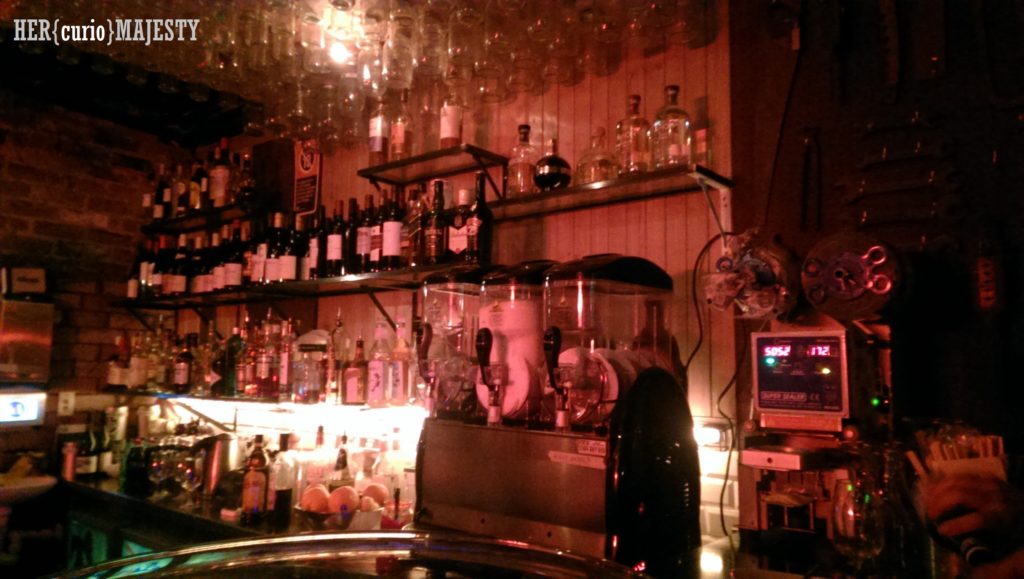 The first thing we noticed when we walked through the door was the bubble tea packaging machine. “Do they have pearl milk tea here?“, we wondered. 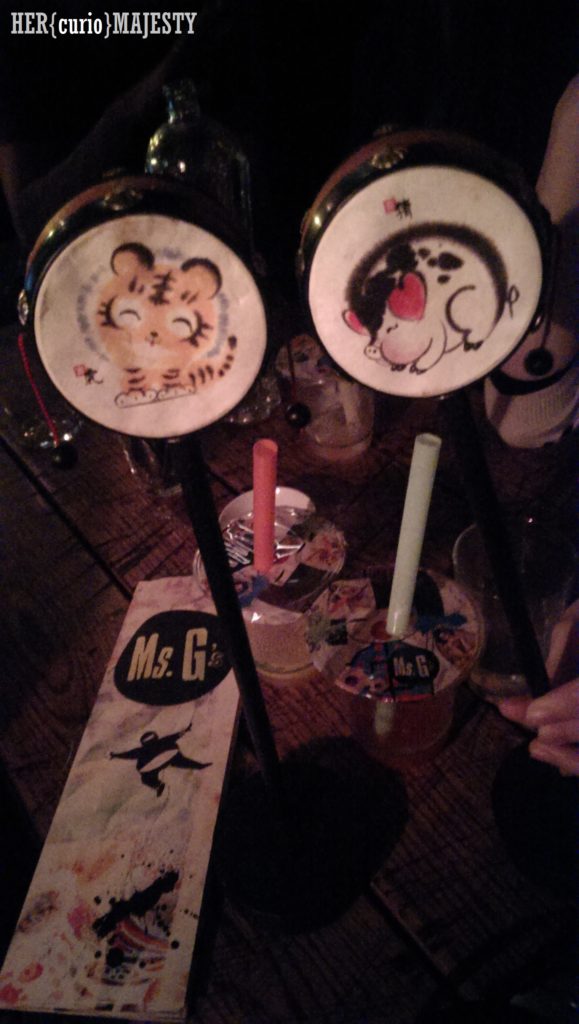 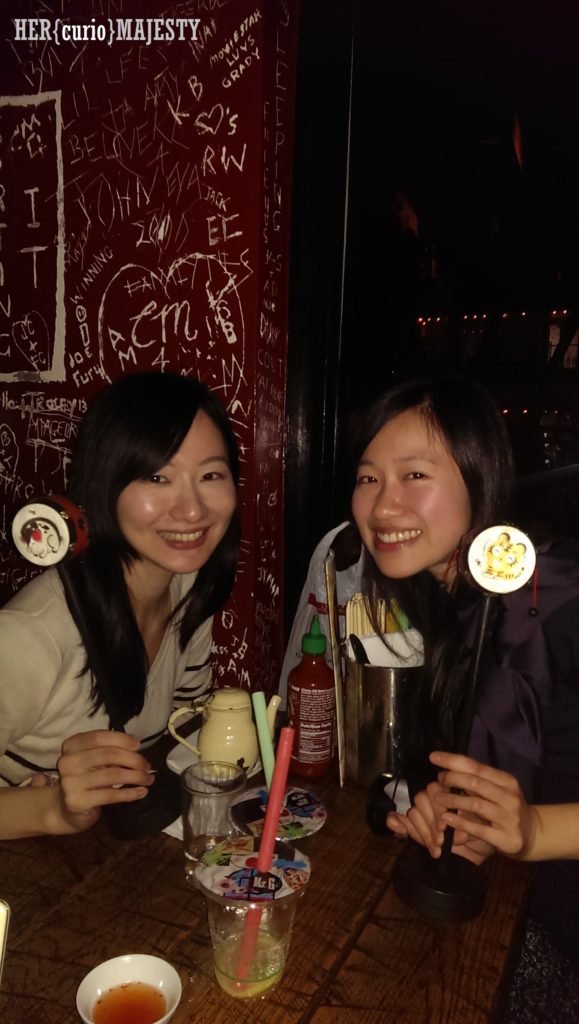 It turned out it’s their cocktail packaging! We ordered the Ms.G’s Famous Yuzu Slushie, $14; and the Killer from a Chiller (Havana club especial, barcardi 8, pineapple, orange, coconut, maraschino pearls), $14.

Jen and I adored their table numbers – it’s on a traditional Chinese instrument called “po lang gu”. We hadn’t seen those in a while, they were what we used to play with as kids in Taiwan! 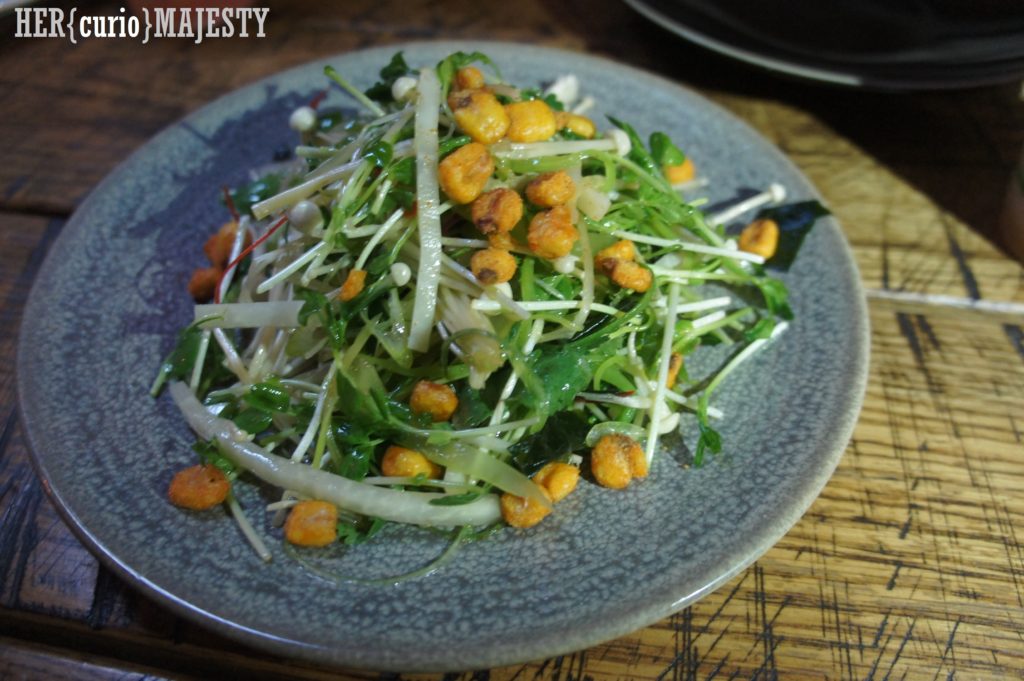 Dan Hong’s crunchy vegetable salad, white soy & ginger vinaigrette, $14. The crunchiness was from the fried corns, and it came with a plateful of well-balanced combination of sprouts, enoki mushrooms and dried tofu slices. Very compatible with my Asian palate, I’ll be making this at home! 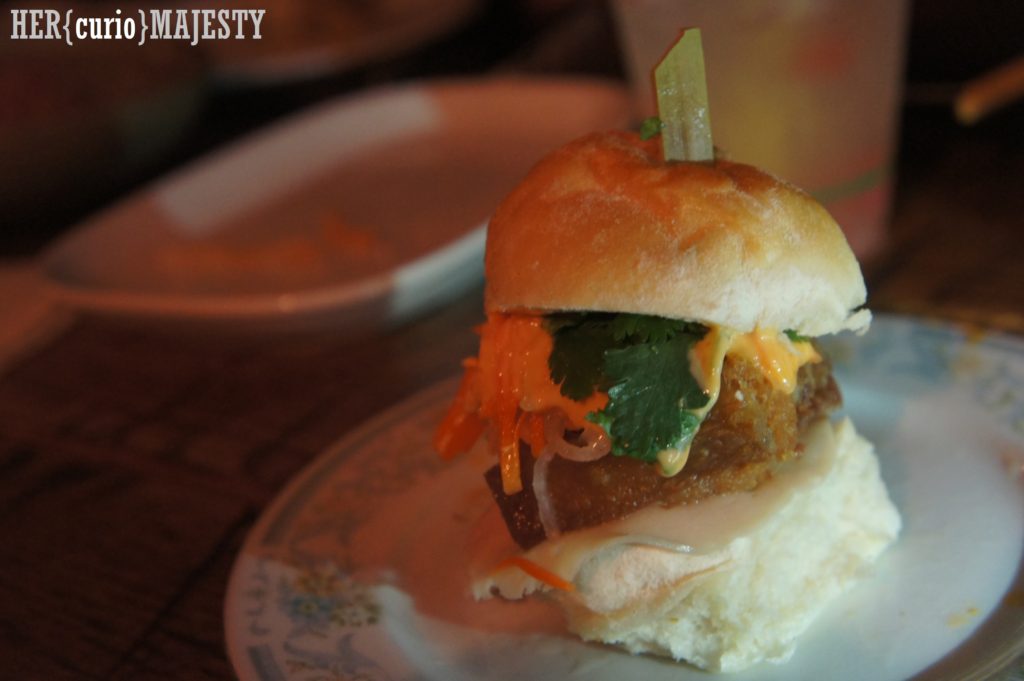 Mini bánh mì- crisp pork belly, $6. The crispy pork belly and the dressing was an absolute delight. The bun itself was lacking a bit because it’s just an average burger bun as opposed to the baguette bun of traditional bánh mì. 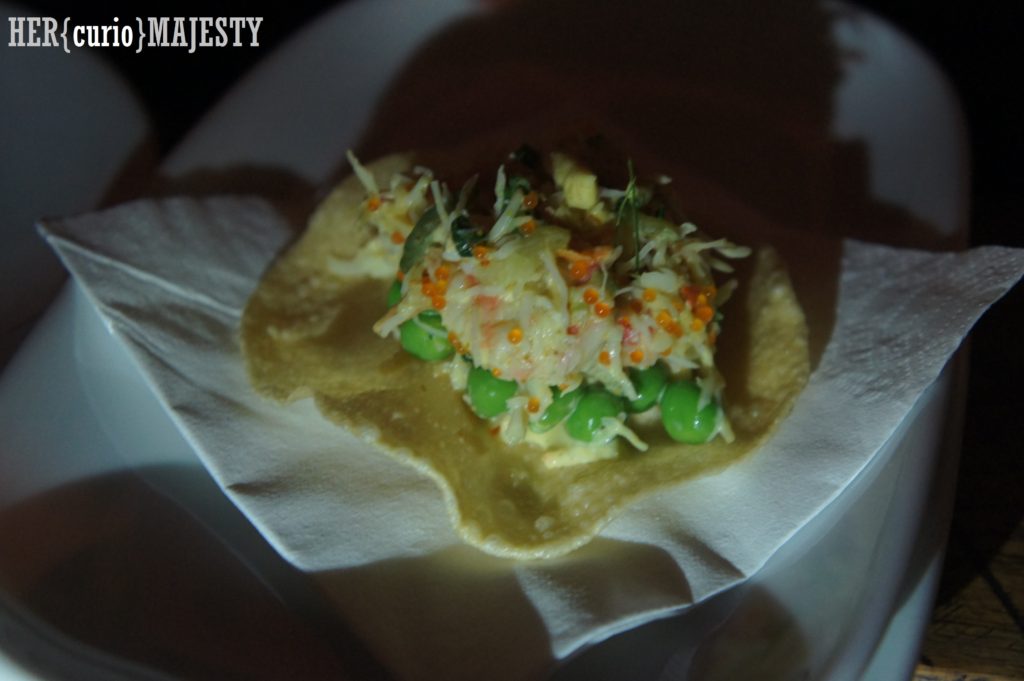 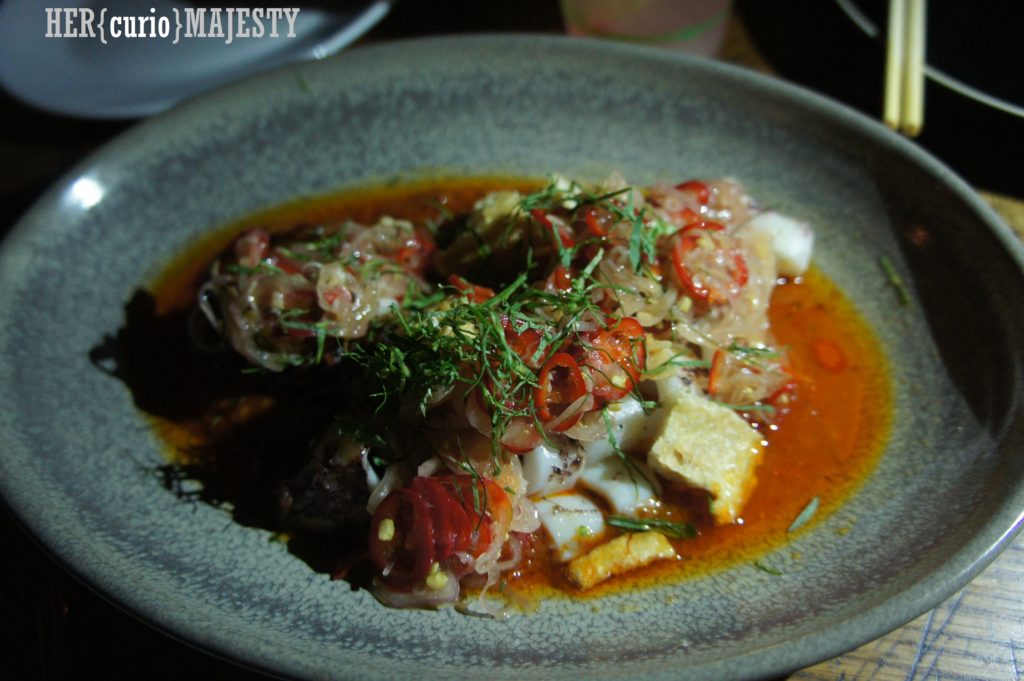 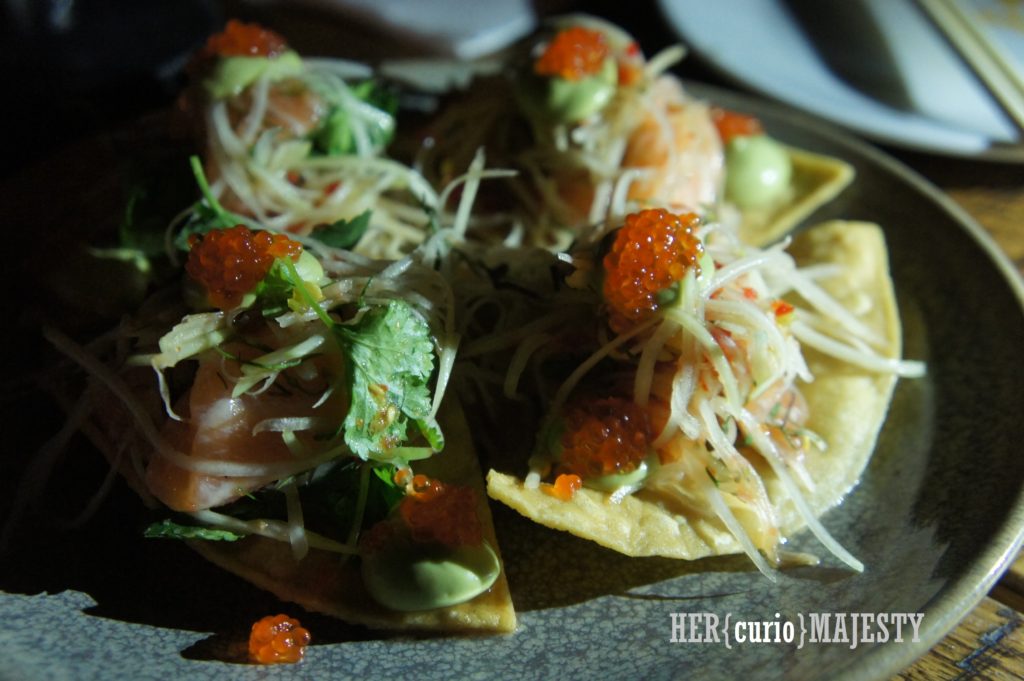 Ocean trout tostada, green papaya, guacamole, red nahm jim, $19. This was the dish recommended by the waiter, he said it’s one of the most popular raw dishes. Yum. 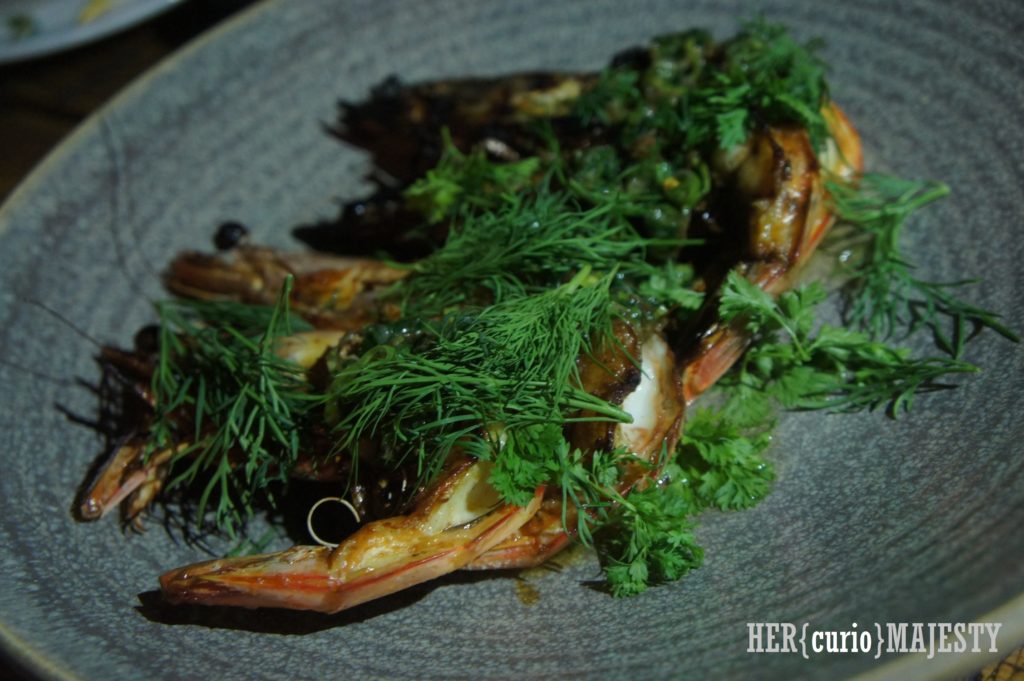 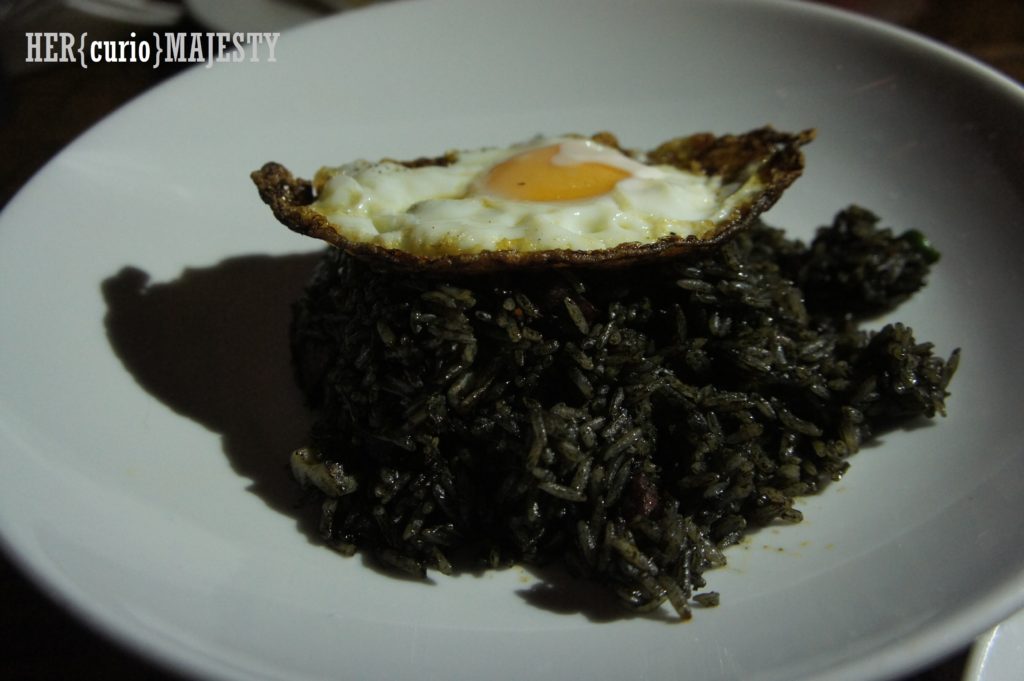 “Nasi goreng hitam” Squid ink fried rice, chorizo, sunny side egg, $19. One of my favourites! Such a clever twist to make it a glorified fried rice. 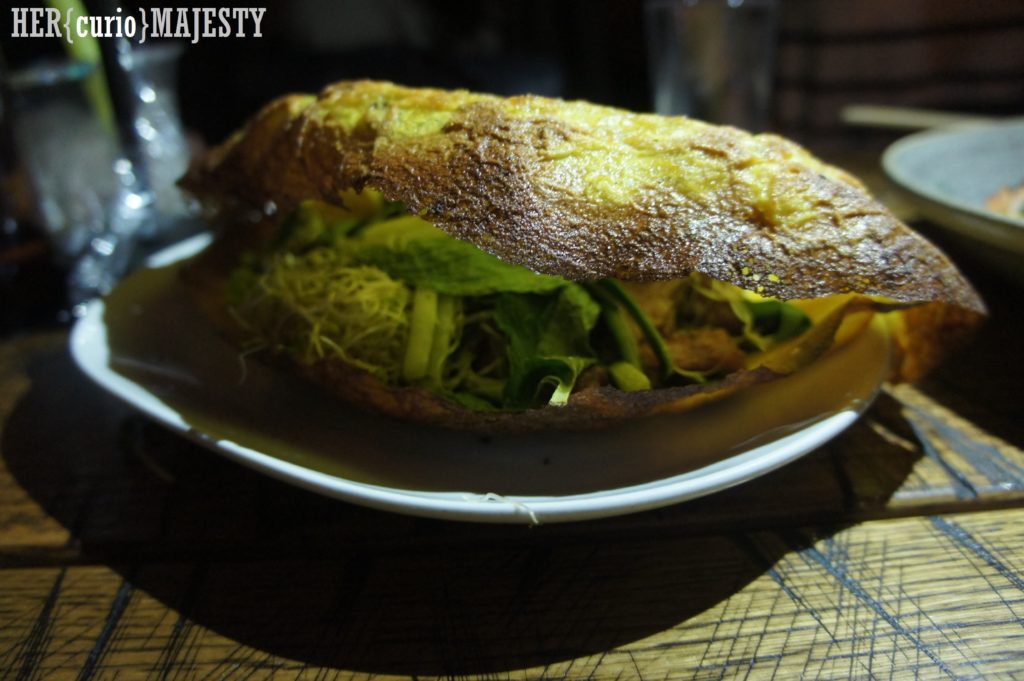 Banh Xeo-Vietnamese pancake of char grilled king prawns and pork, $29. The pancake was the highlight, beautifully thin and crispy. 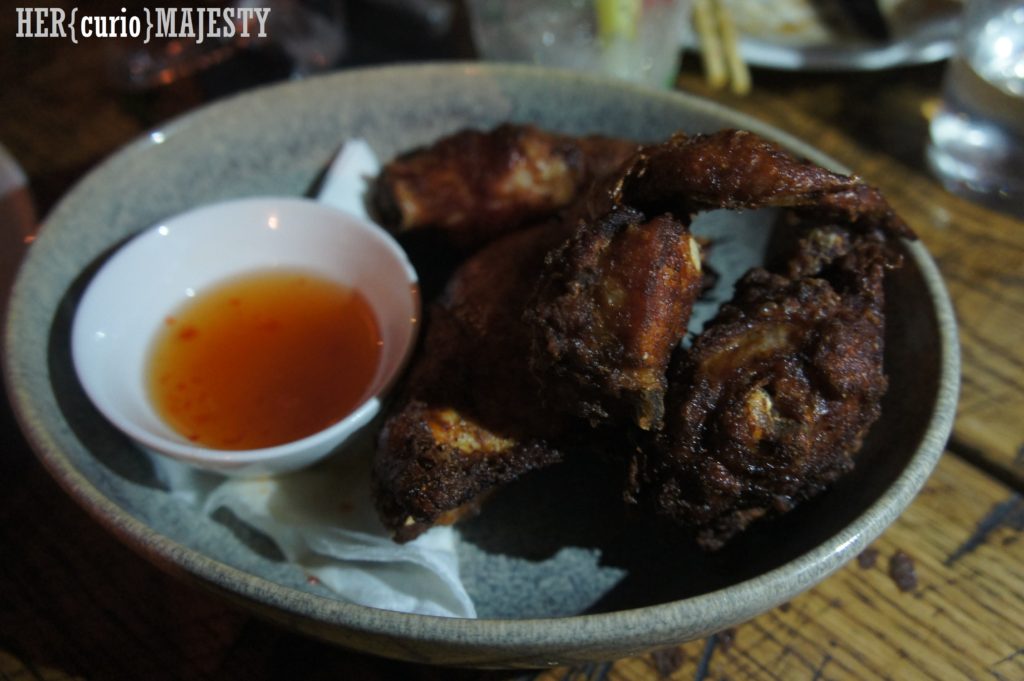 Crunchy Bangkok fried chicken (half), $16. This was more like a bar food, but it was an above-average fried chicken. I like. 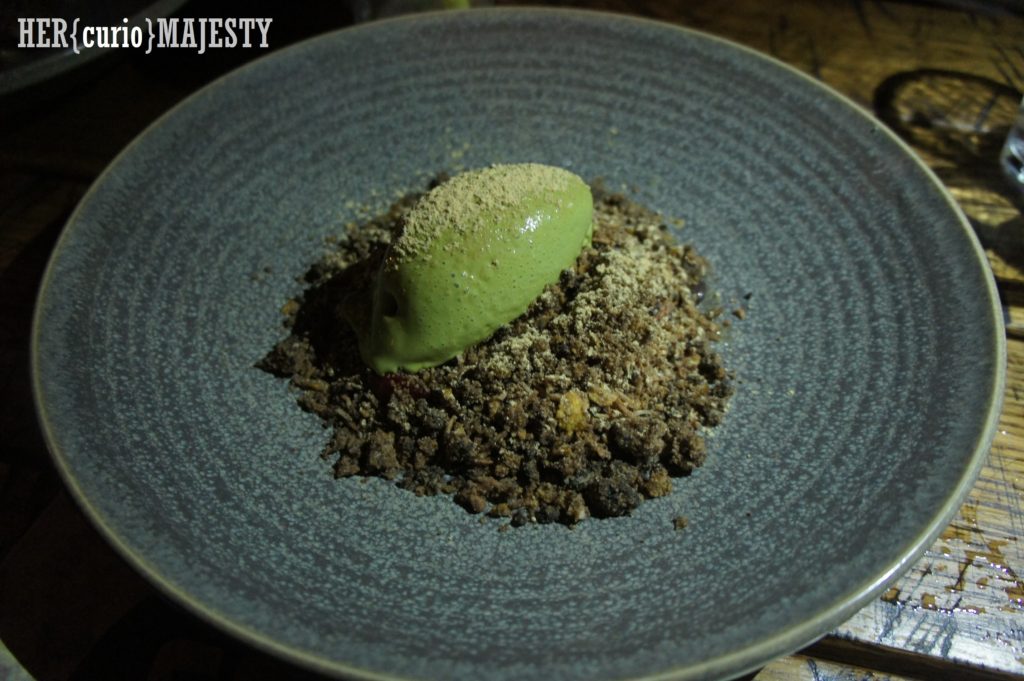 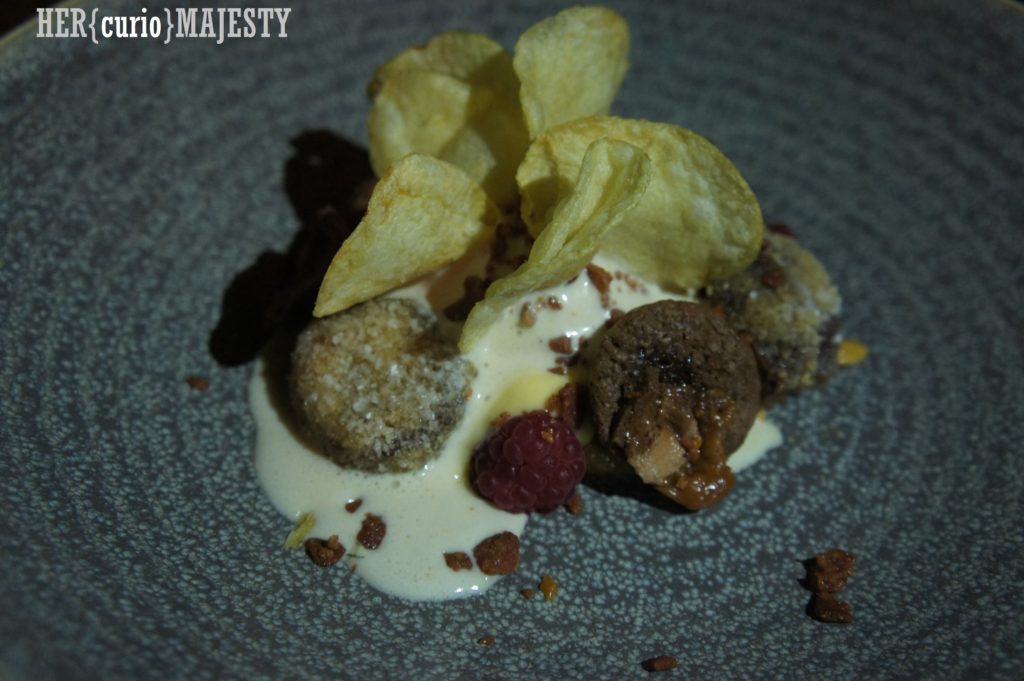 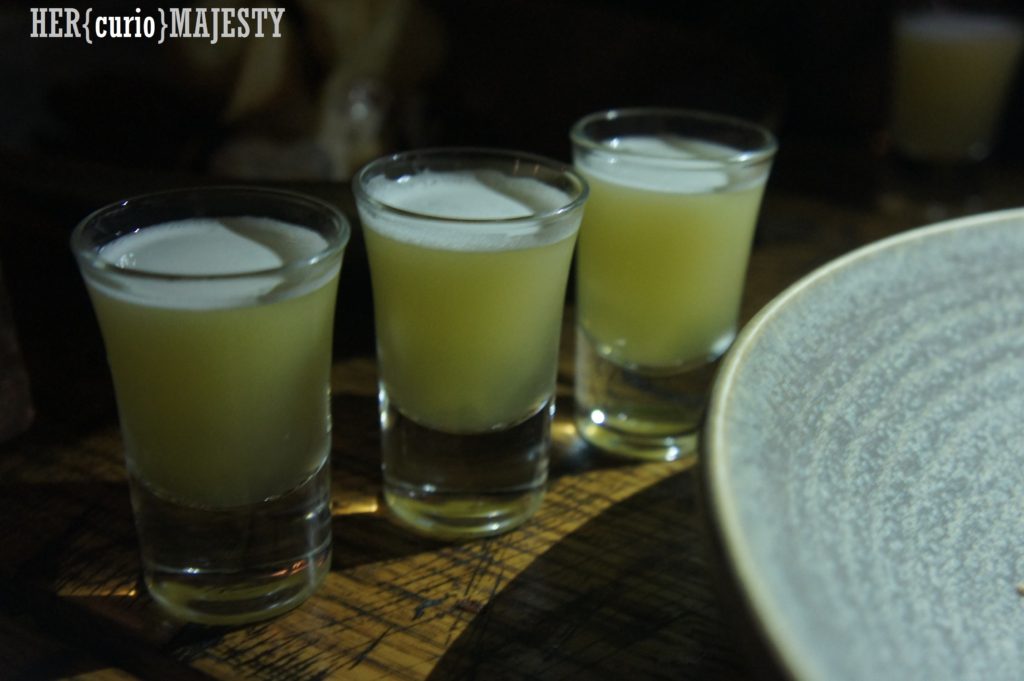 By the time we finished our desserts, it was already 9pm, and we hadn’t received a call from downstairs. A staff noticed this, chatted us up, and offered us complimentary fruity shots on the house! Wohoo. 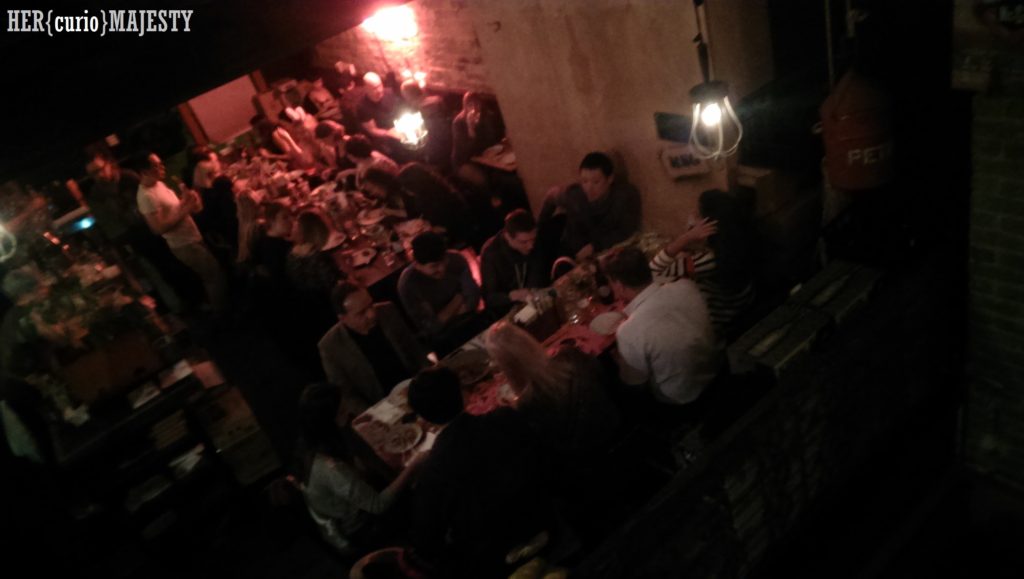 The place was cleverly divided into multiple mezzanines, making its capacity a lot bigger than what it seemed from the outside. 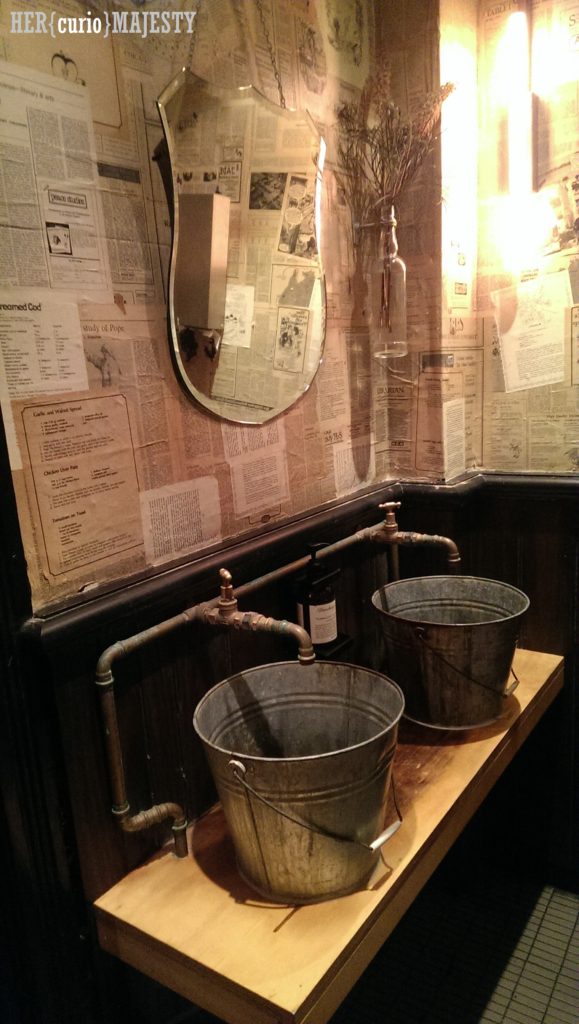 The interior of the restaurant was well thought-out, and decidedly Asian. Even the decorations of the bathroom maintained the same rustic Asian style. 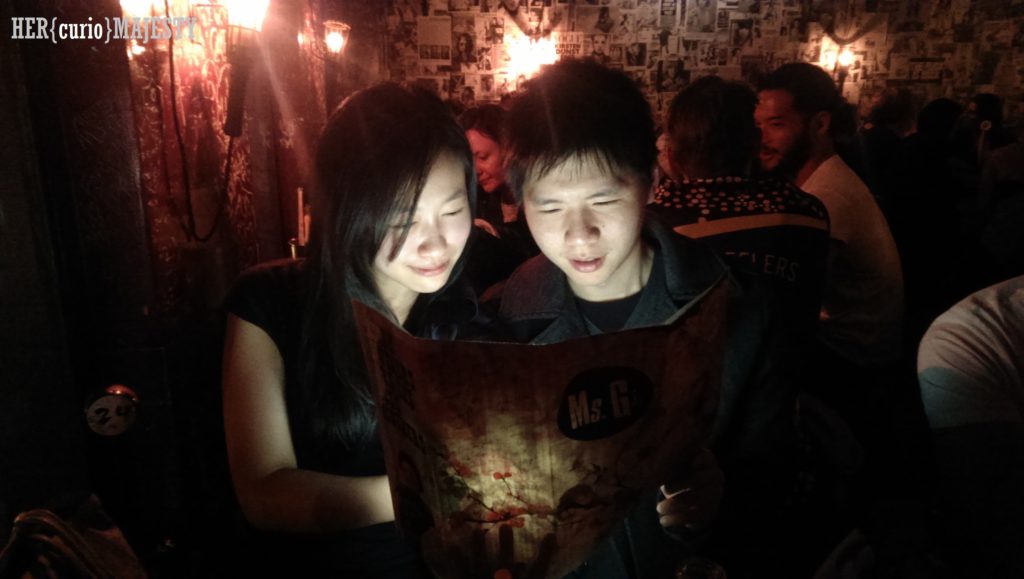 The downsides of having your dinner at the bar were that it’s quite noisy, and extremely dark! It was so dark that we had to use our torch all the time to see what’s on the menu and on the table. 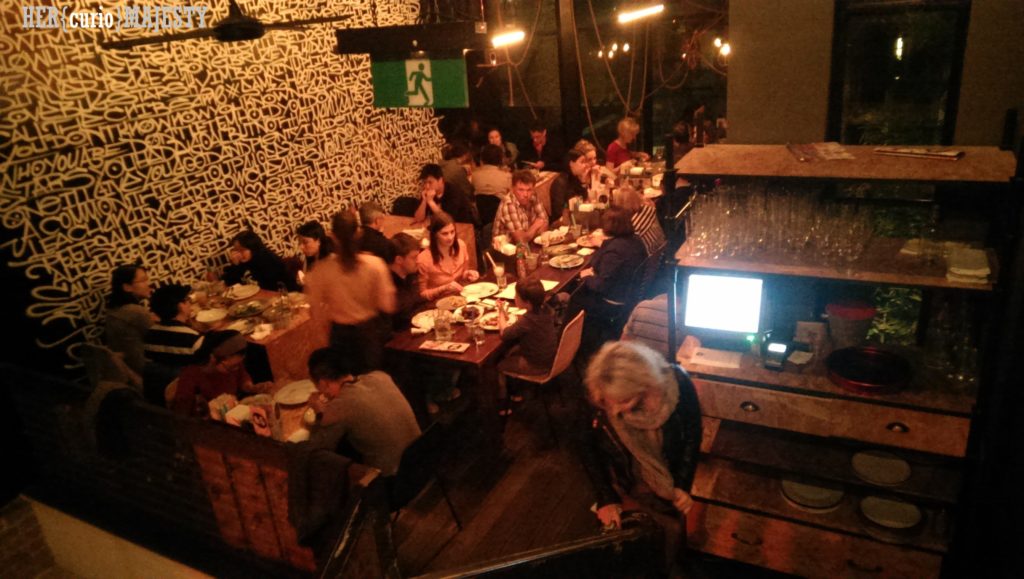 Even though the dishes got mixed up a couple of times for our table (I ordered but didn’t get our prawn toast; the Banh Xeo-Vietnamese pancake took forever; and we had to chase up on our fried chicken), we weren’t too fussed because we were given free dishes… Let’s say it all balanced out. Ok, when it first happened, we promptly said to the waitress that we’d already had the salad that she’s about to put on our table again – So she took it back. But then it happened again…We had no choice but to eat it (what would you do?). In our defense, it was really dark and chaotic at the bar, by the time we checked with each other whether the dish in front of us was what we ordered, the waitress had already gone and disappeared into the bar crowd. We weren’t going to battle through the crowd to return the wrong order as mere customers, so we graciously accepted the treat. Thanks, Ms.G.

Otherwise, service was great. The smaller dishes came out quick, and the staff were attentive. It’s just that a table for 6 actually took 3 hours to become available…we eventually got a call at 9:30pm saying that a table was ready!