I stayed two nights at the Palazzo Versace for my legal conference in August and I absolutely loved it. The decors of the rooms and the hotel facilities deserved the five-star recognition and, of course, everything was made more glamorous with the Versace label. 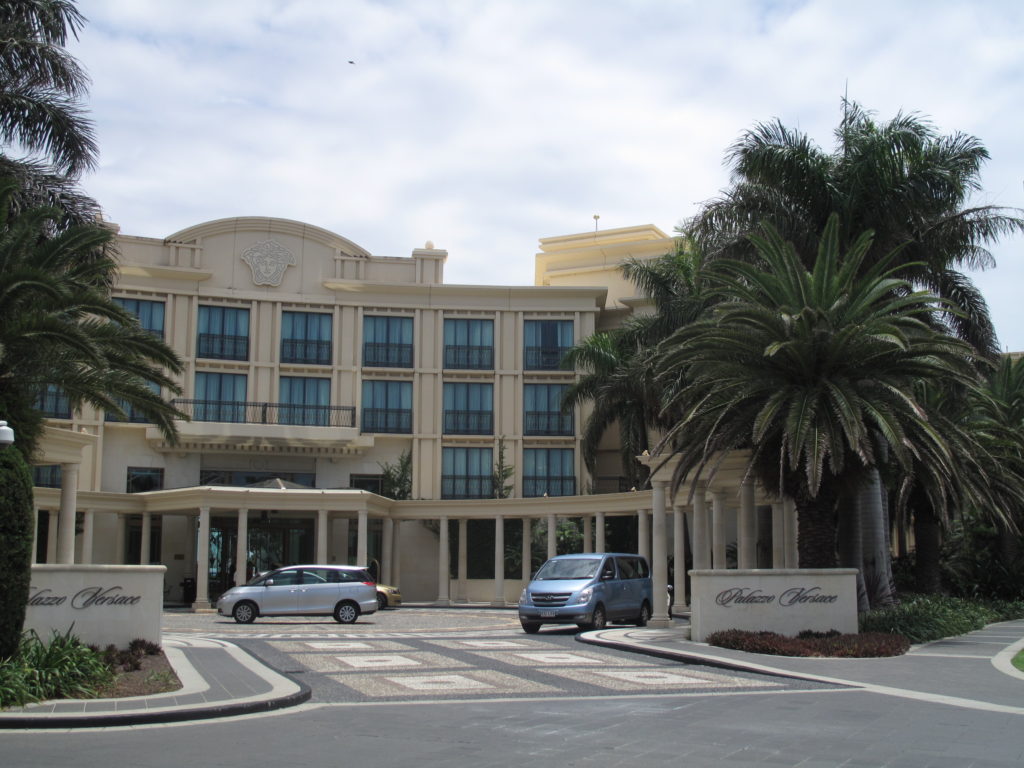 The entrance. It is often lined with high end automobiles and limousines. 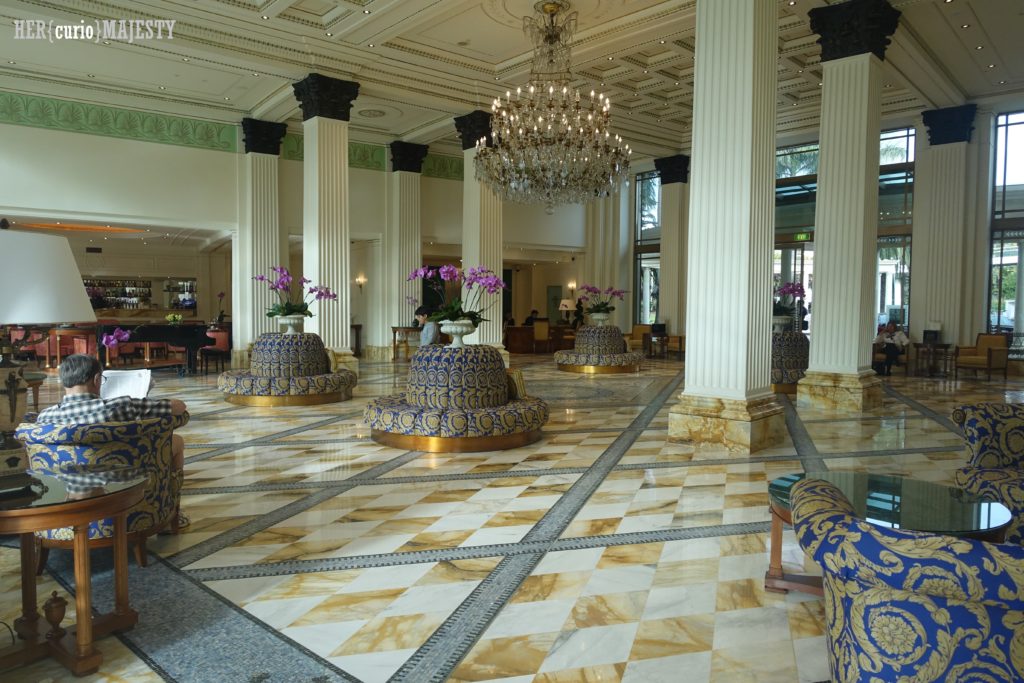 The sun-filled lobby with solid marbles and the magnificent chandelier. 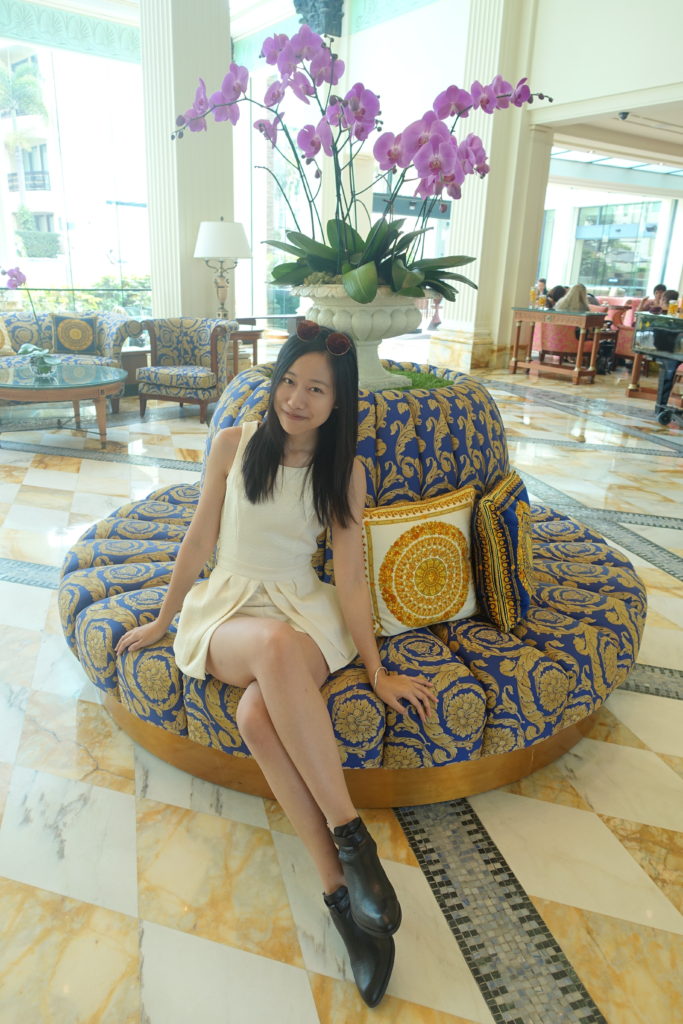 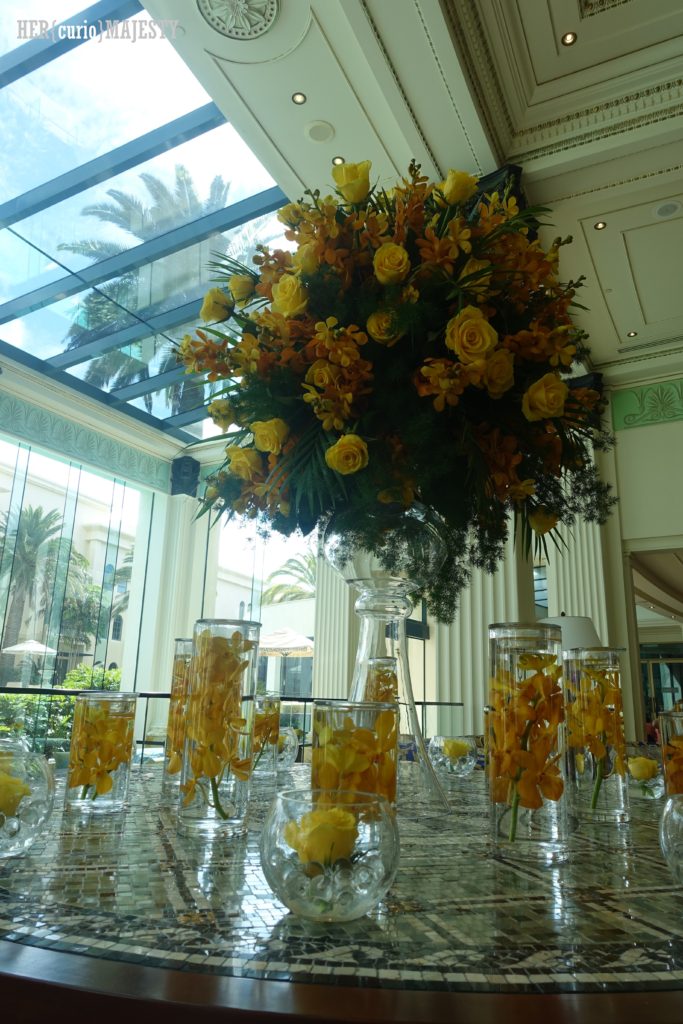 Beautiful flower arrangement at the lobby. 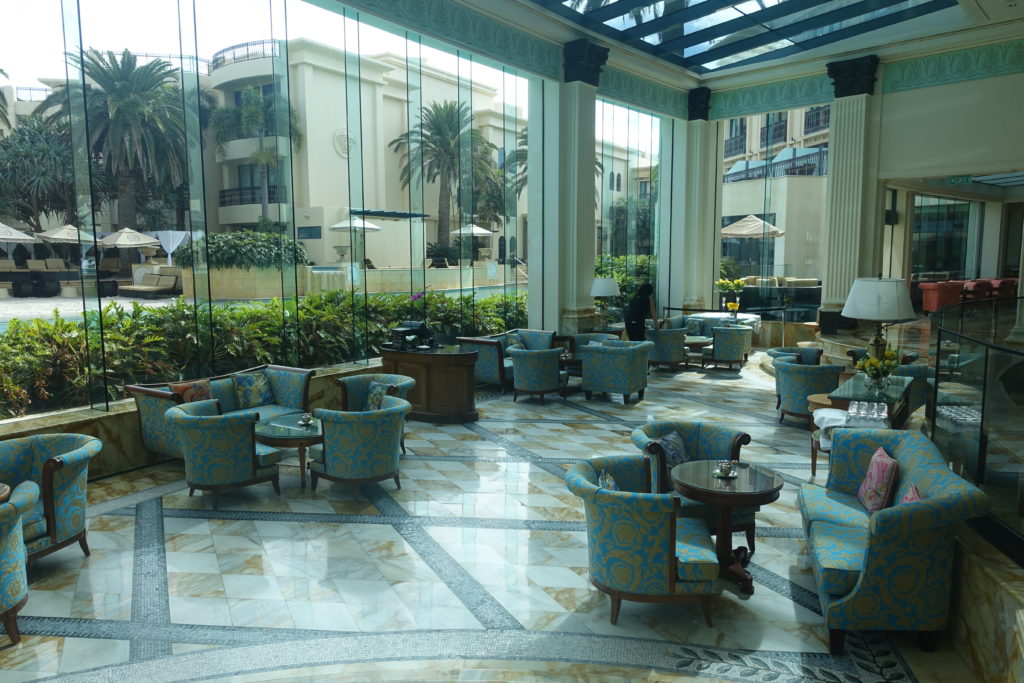 Le Jardin is in the middle of the lobby, where you could enjoy Palazzo Versace’s afternoon tea with a view. 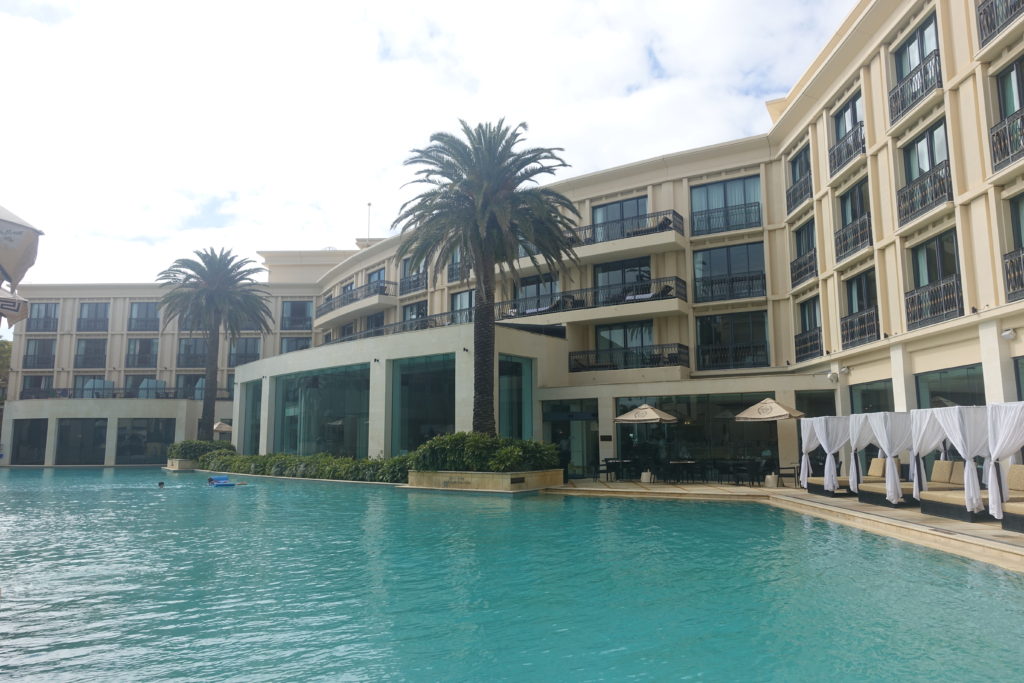 Versace’s Water Salon (which is just a fancy name for the hotel pool). Access to the Water Salon is restricted to hotel guests through their swipe key system. The weather was still quite chilly in late August so we didn’t take a dip. 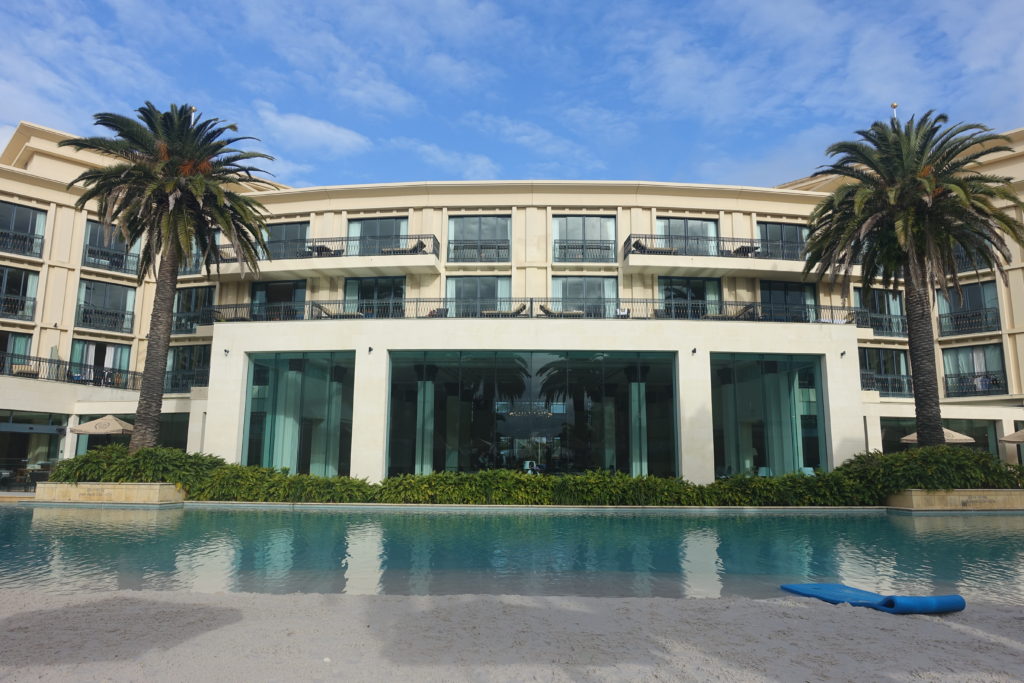 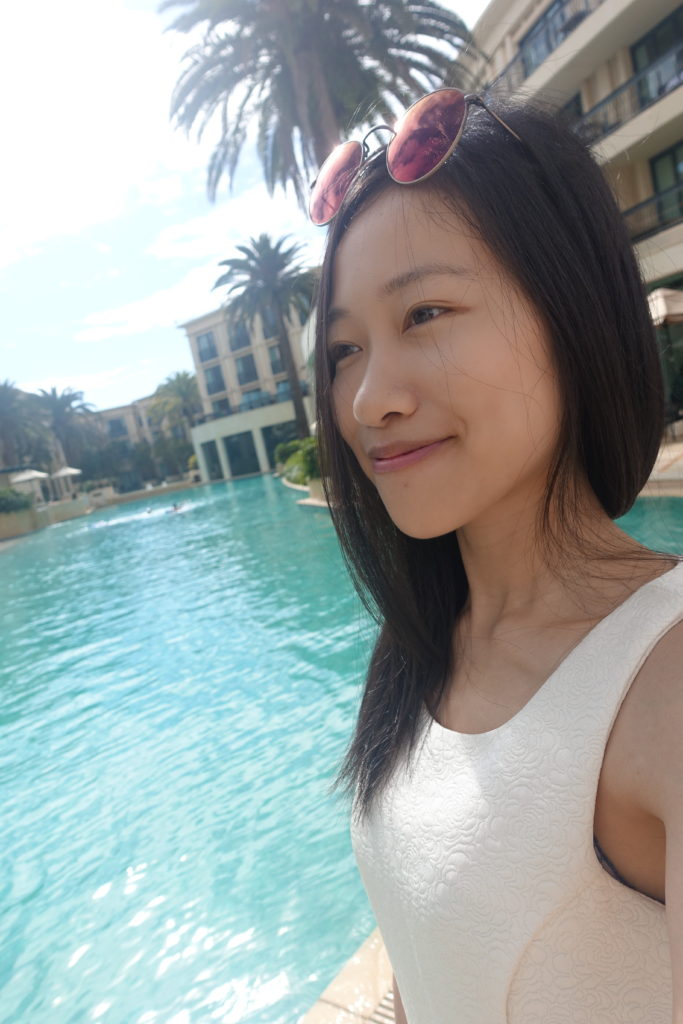 I really wanted to go swimming but unfortunately we had already packed everything up and we had to check out in 20 minutes. So I relaxed in the gazebos and took some selfies instead haha. 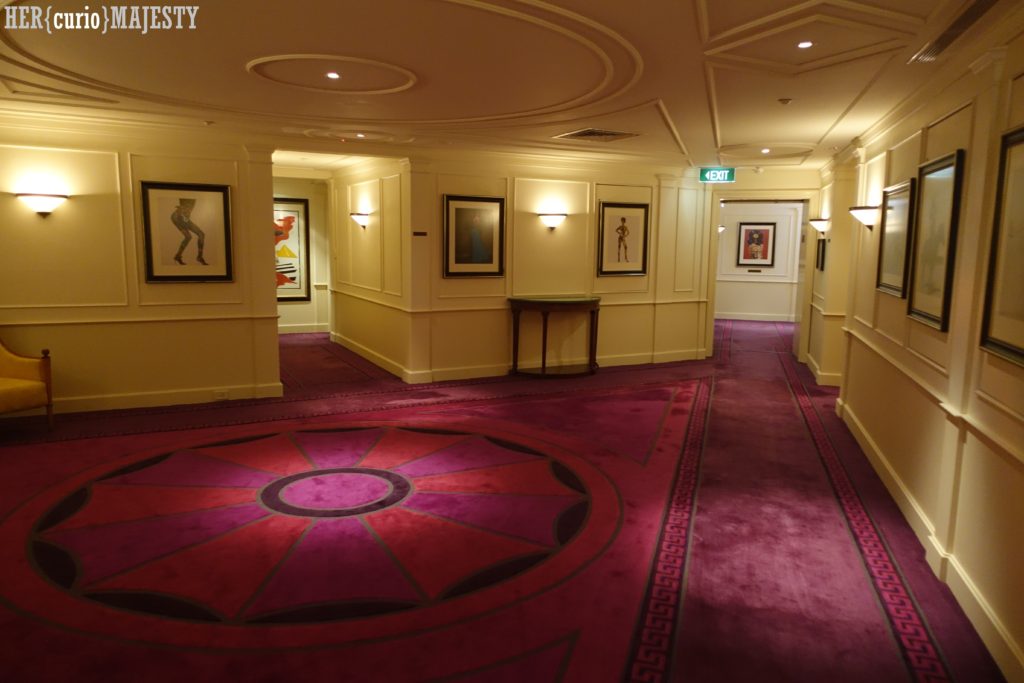 The hotel corridors were dimly lit with the walls decorated with framed Versace artsy photo-shoots. I have to say the walkways felt slightly dated so I didn’t have high expectation for the rooms. 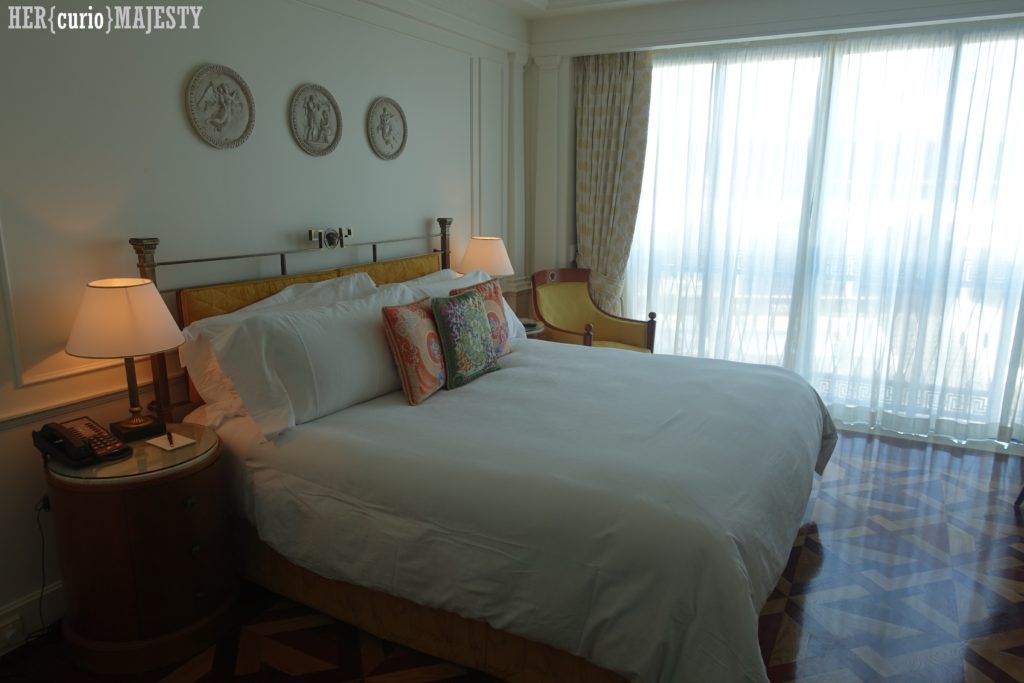 Surprisingly, in contrast to the dated walkways, the room was new, classy and bright. The bed and pillows were heavenly soft and fluffy. However, the sound-proofing of the room was hopeless as the noises and people’s chatters on the corridor could be heard very clearly from the inside. 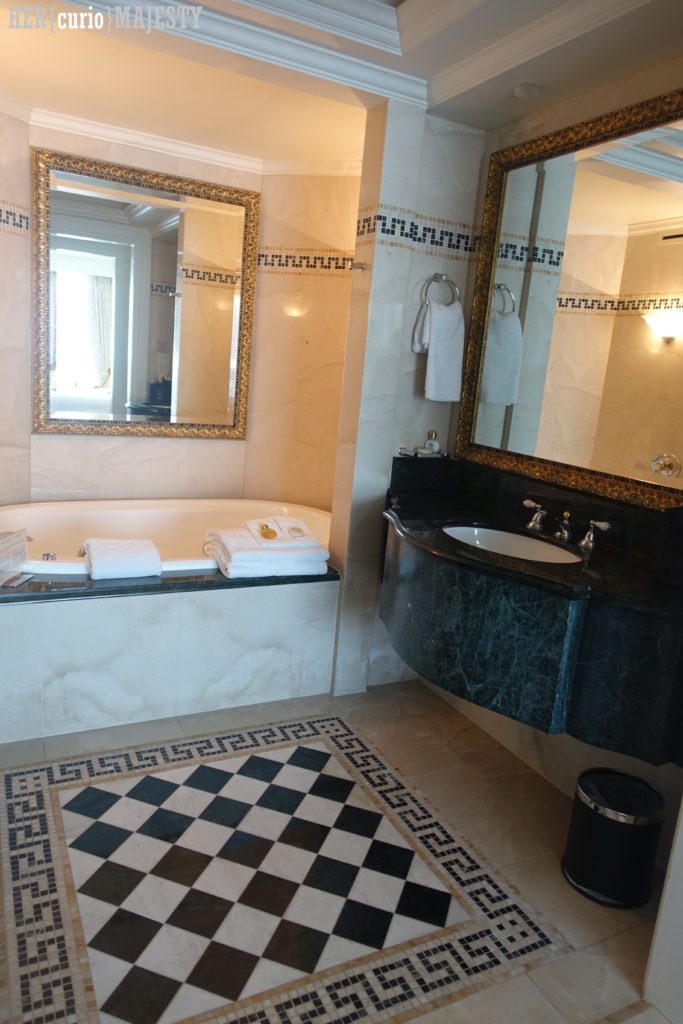 The Jacuzzi and the spacious bathroom was my favourite part of the room. Nothing beats a relaxing bath after a long day of conference. The only complaint I had about the bathroom was it doesn’t have a door! The lack of door means everything you do in the toilet could be heard and seen by the other person…

Believe it or not, Mike and I had never deliberately farted in the presence of each other after 8 years together. Sure, our tummies occasionally grumble and sometimes we hear noises coming from the toilet…but we don’t do it unashamedly in front of each other. We never talked about this, but like many things between us, this had just kept the way it was like when we first started going out. Anyway, my point was the toilet design was very impractical and could create unnecessary embarrassment for couples who want to maintain some mysteriousness and privacy…

Mike actually went to use the lobby toilet on the second night after gym haha. 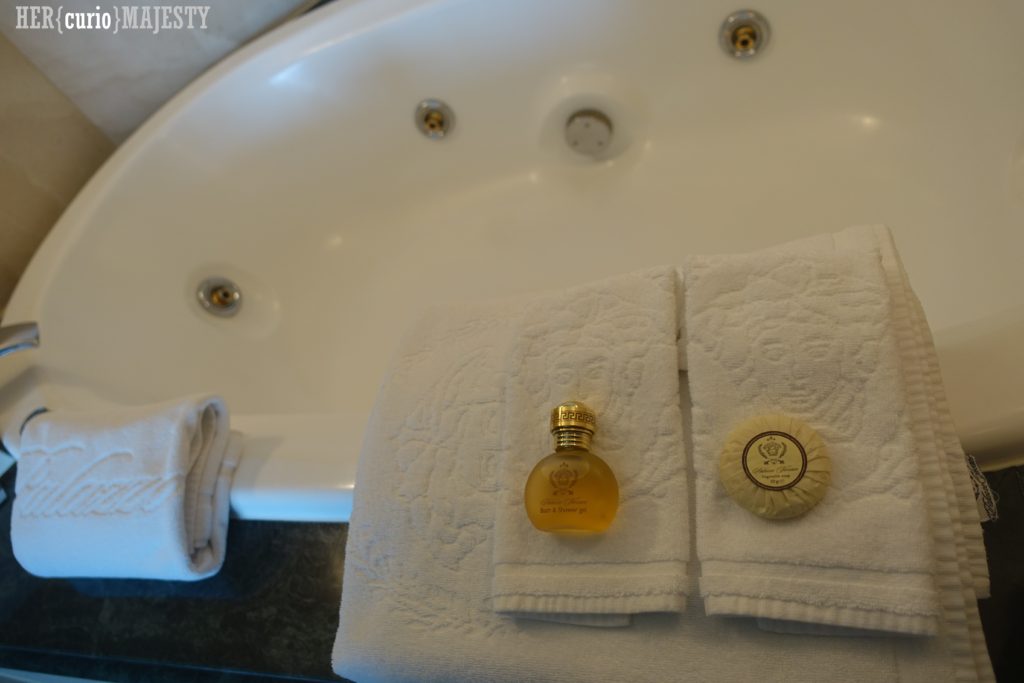 The Versace towels were one of the best hotel towels that I had used – thick and highly absorbent. 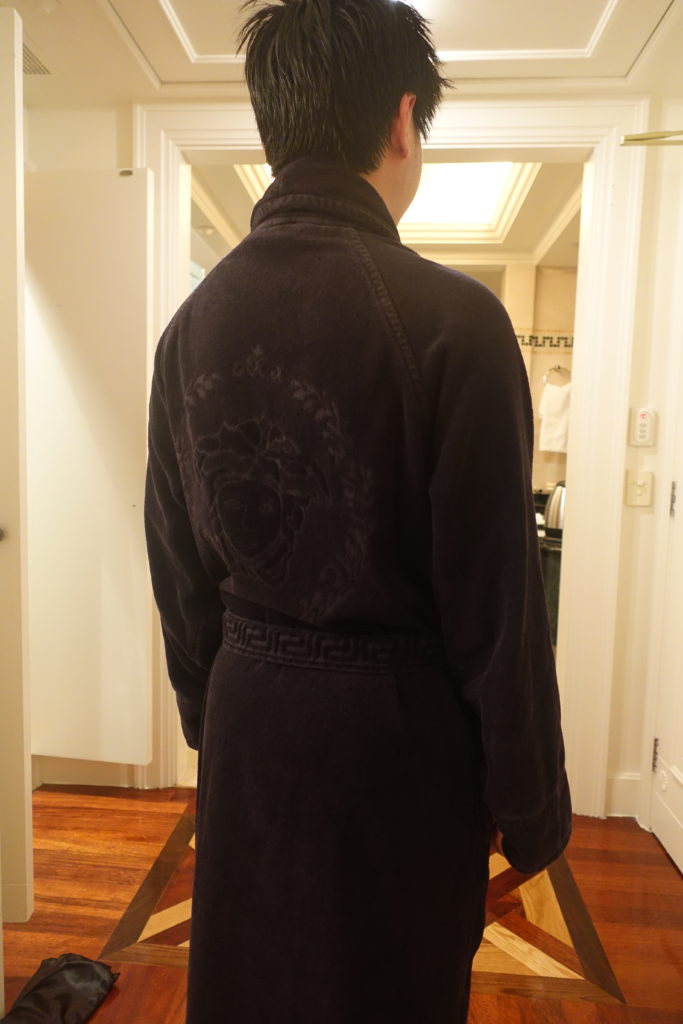 The bath robes were fantastic too. 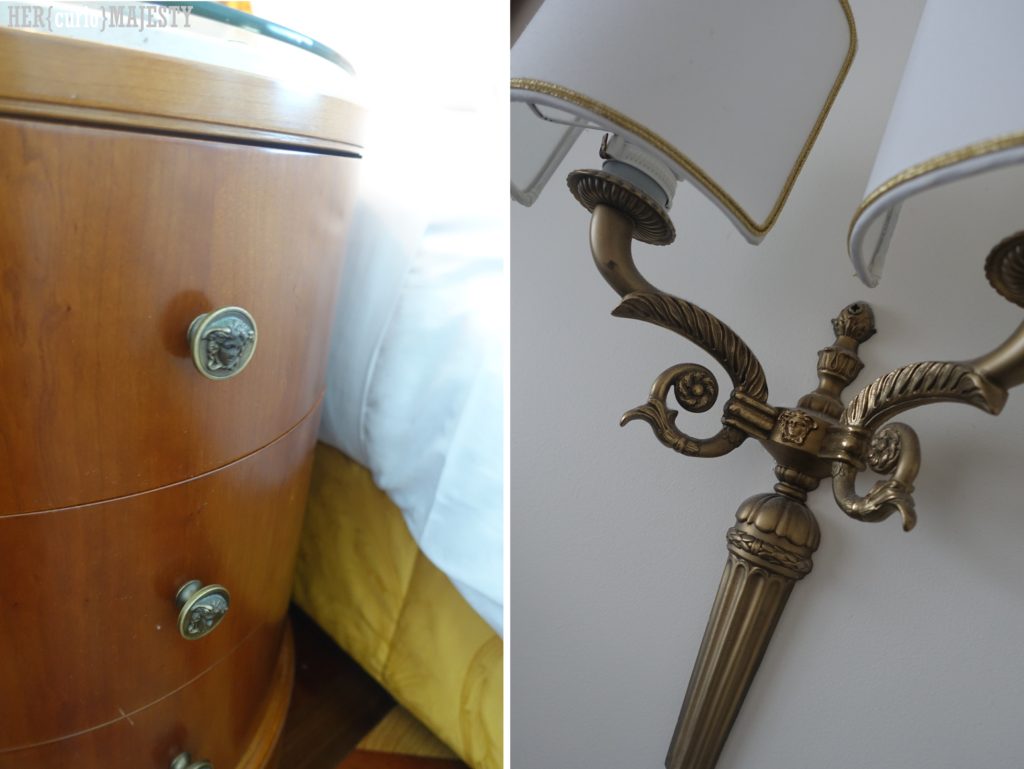 You could find the Versace signature Medusa head details on literally everything in the room. Everything! 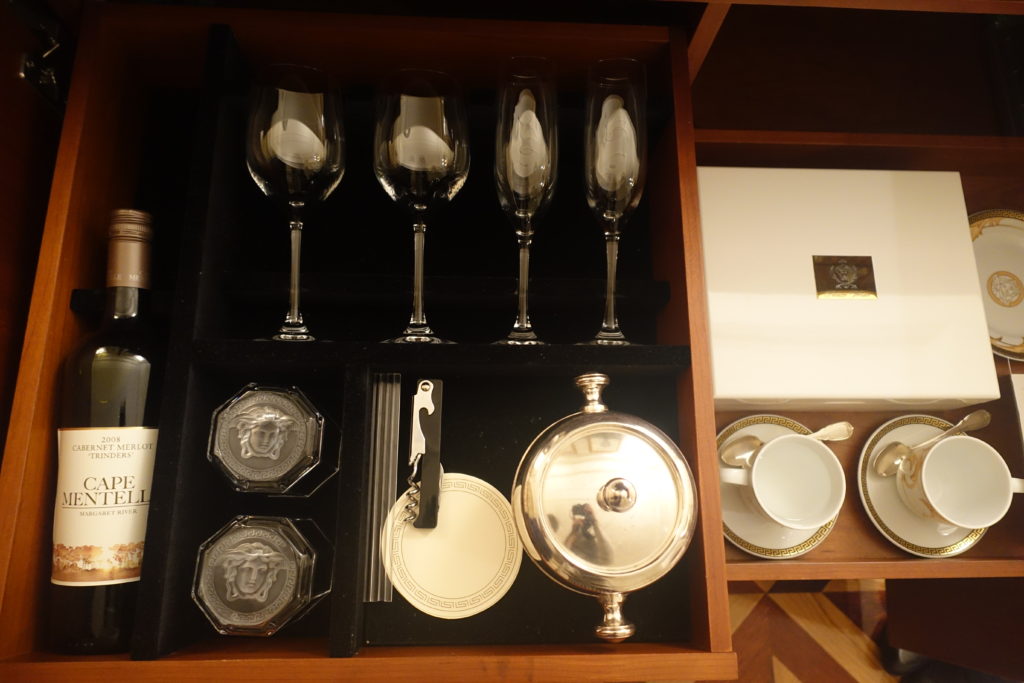 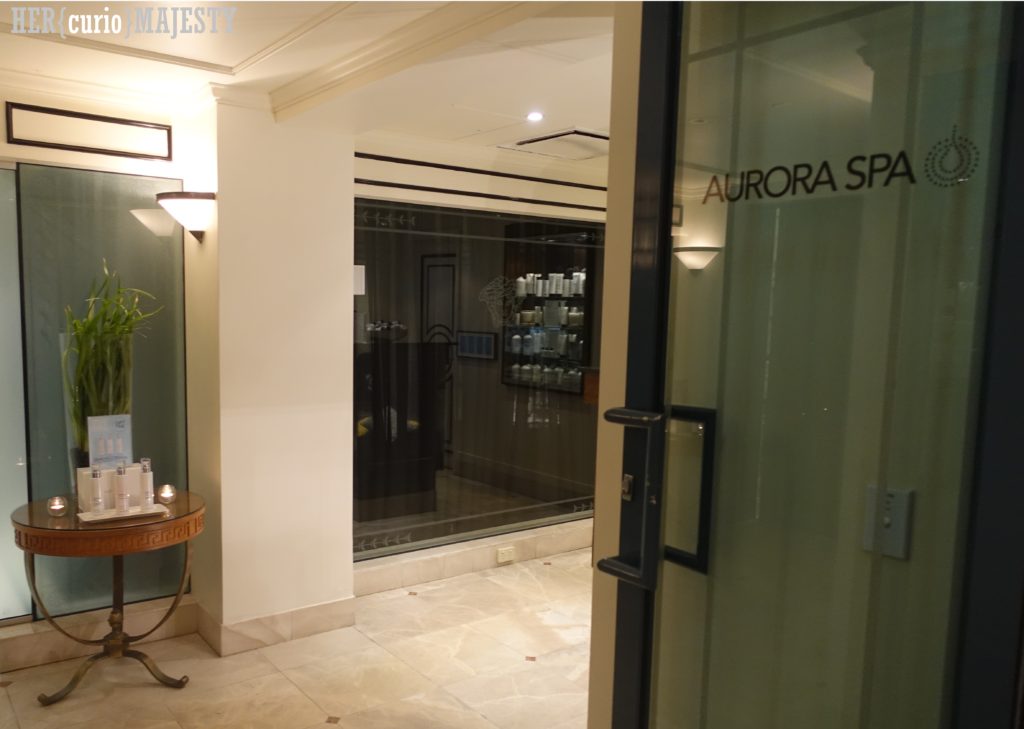 If the $450/night rooms are not enough, you can spoil yourself further with the spa packages at the Aurora Spa within the hotel. Click here for the spa menu. 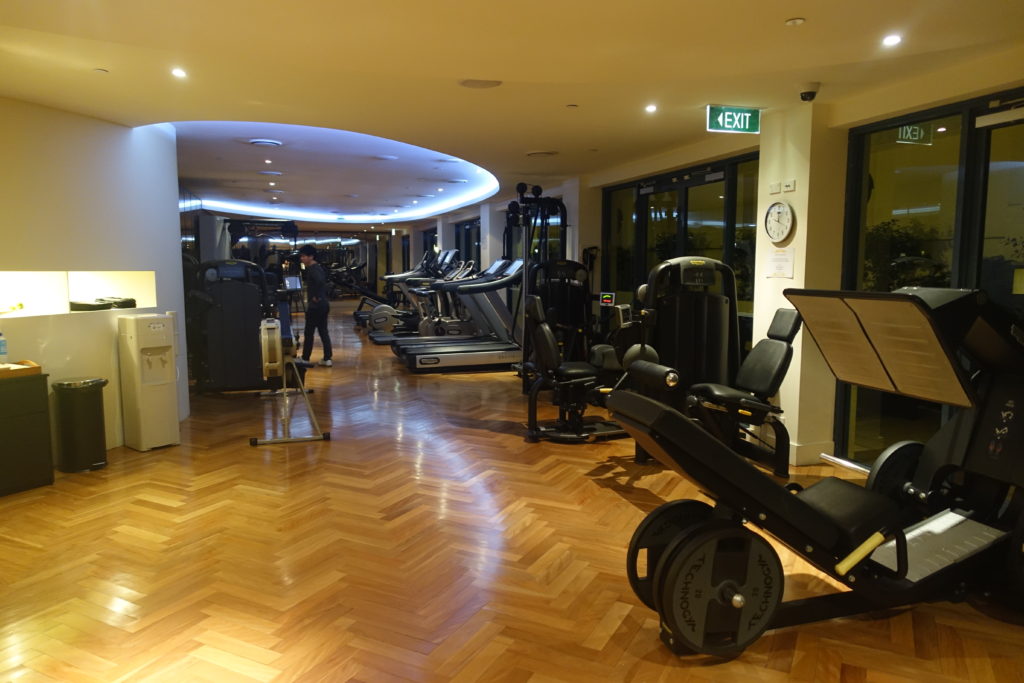 When I was in my teens, I couldn’t understand why my parents would want to “go for a jog” or “check out the gym” while on holidays. As I grow older, I finally see why…the facilities are part of the price that we pay! And also it can’t be healthy binge-eating all weekend with no exercise, right? 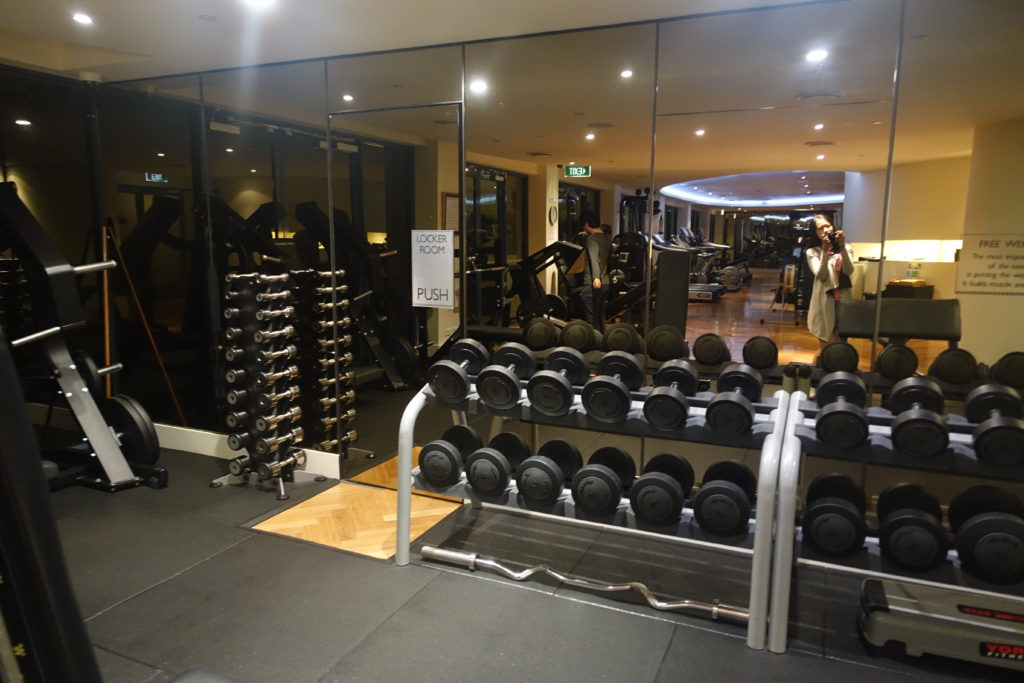 The 24/7 gym was really big with well-maintained European gym equipment – there were a few that Mike and I hadn’t even seen before. We went at around 11pm and had the gym all to ourselves. 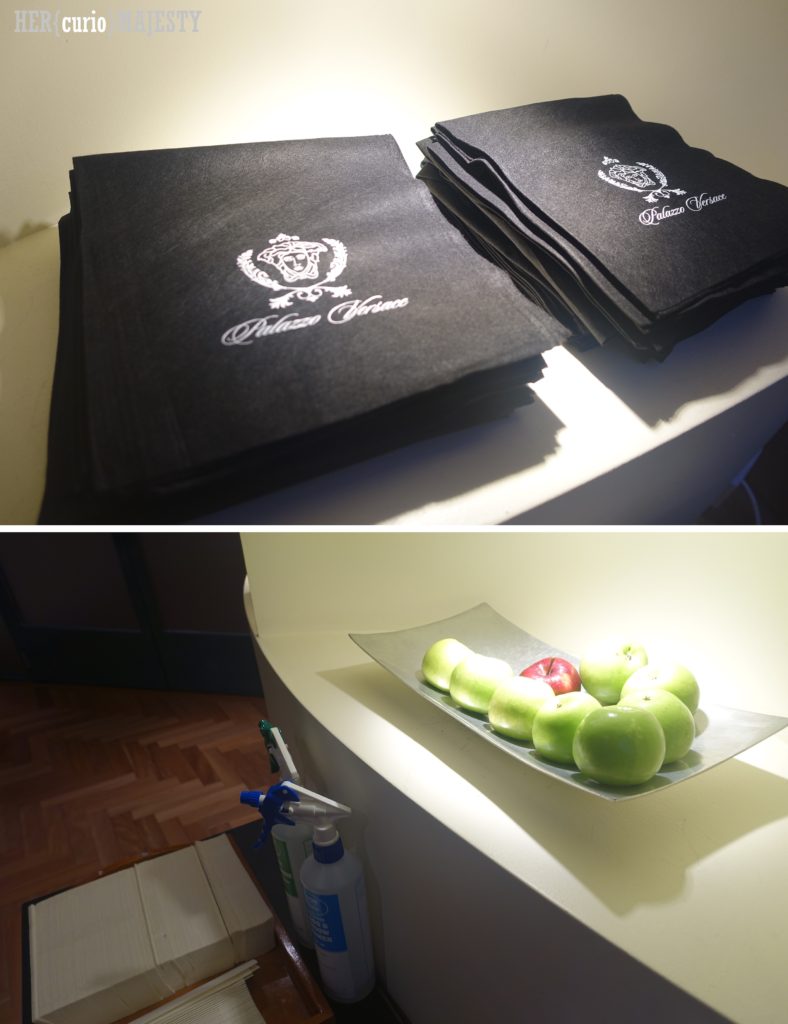 Versace disposable towels and fresh fruits at the gym. 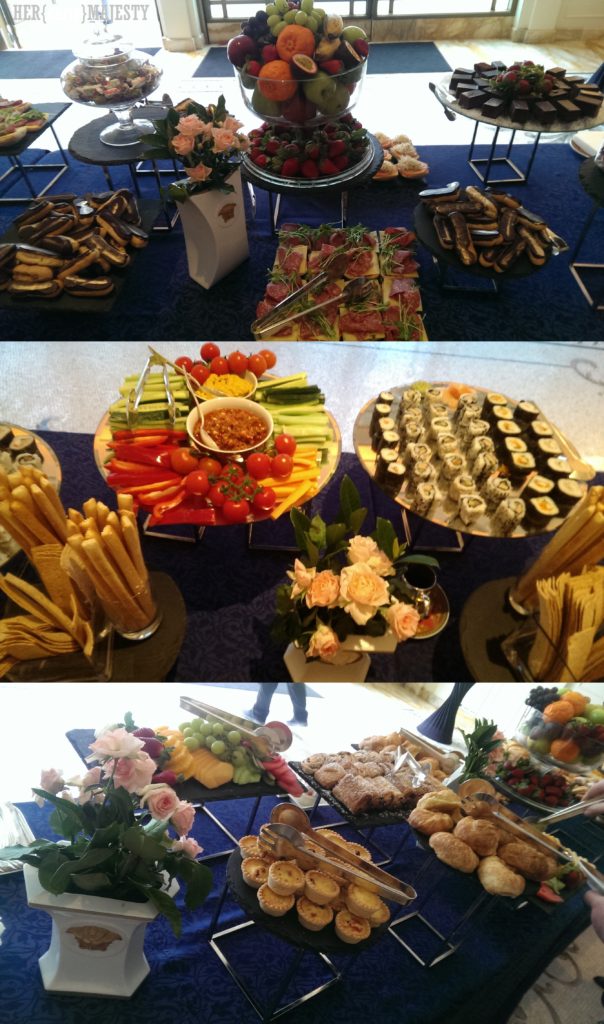 We were positively over-fed at the conference. Every day we had a buffet morning tea, buffet lunch and buffet afternoon tea….Of course I could choose not to eat them. But I mean they’re plated so nicely right there and the pastries were practically begging me to eat them – how could I say no!? 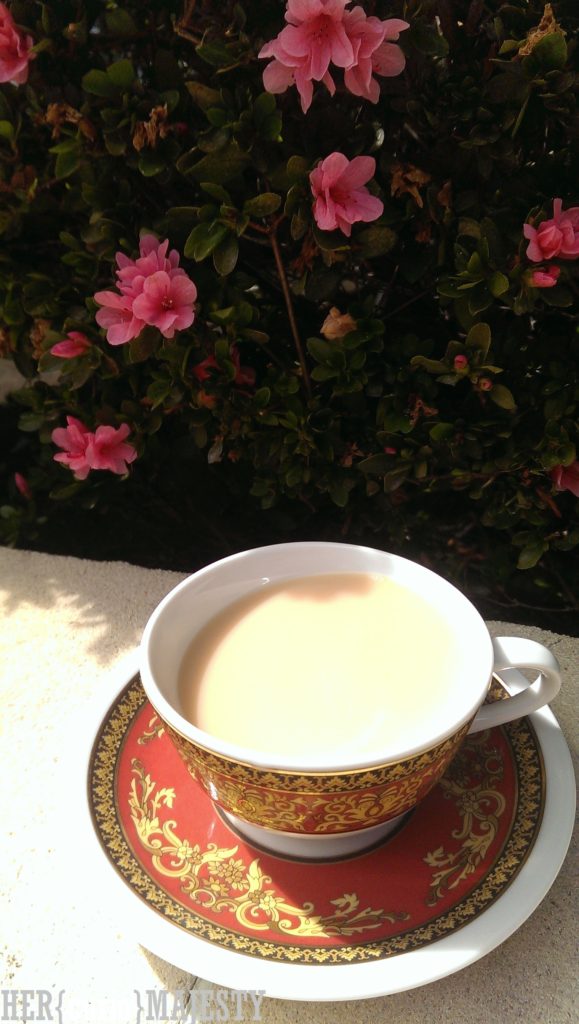 Sipping my La Maison Du The tea in the elegant Versace teacup and saucer. 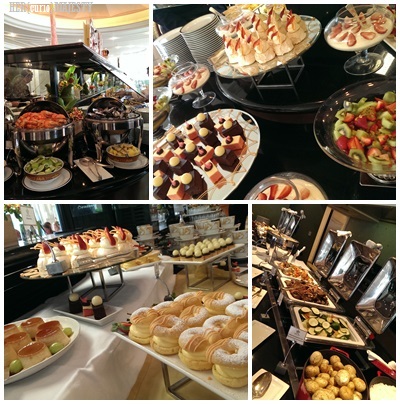 I found the lunch buffet at Il Barocco rather underwhelming. Whilst the oysters were amazing, that was about the only good thing I could say about the food. The cold and savoury selection was limited and mediocre at best. The dessert was slightly more exciting but still somewhat lacking in delicacy. 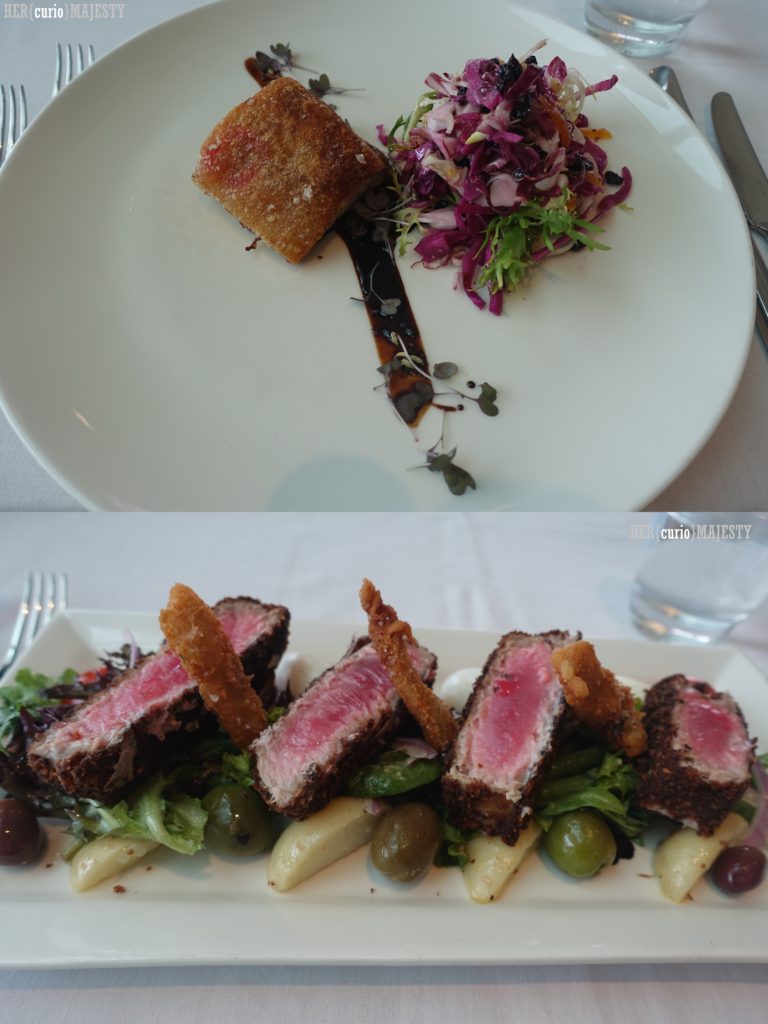 Mike had the 2-course lunch special ($55) at the Vie Restaurant while I was at the conference. He thought the food was OK, but the service was too slow. 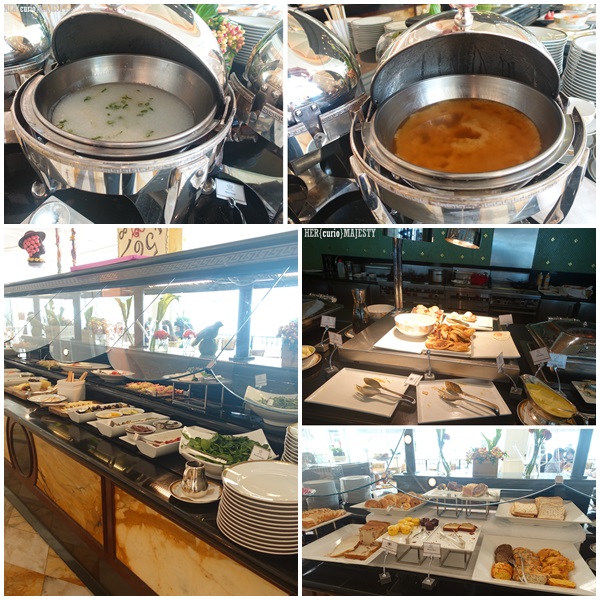 The breakfast buffet was also served at Il Barocco. It was better than lunch but you can’t really stuff up breakfast anyway. 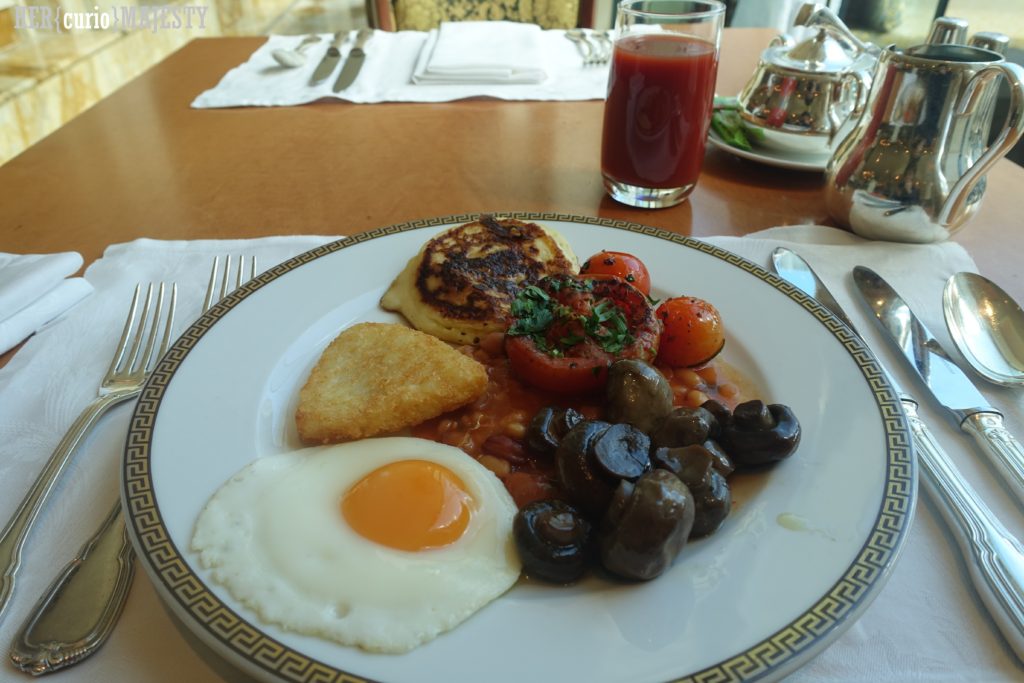 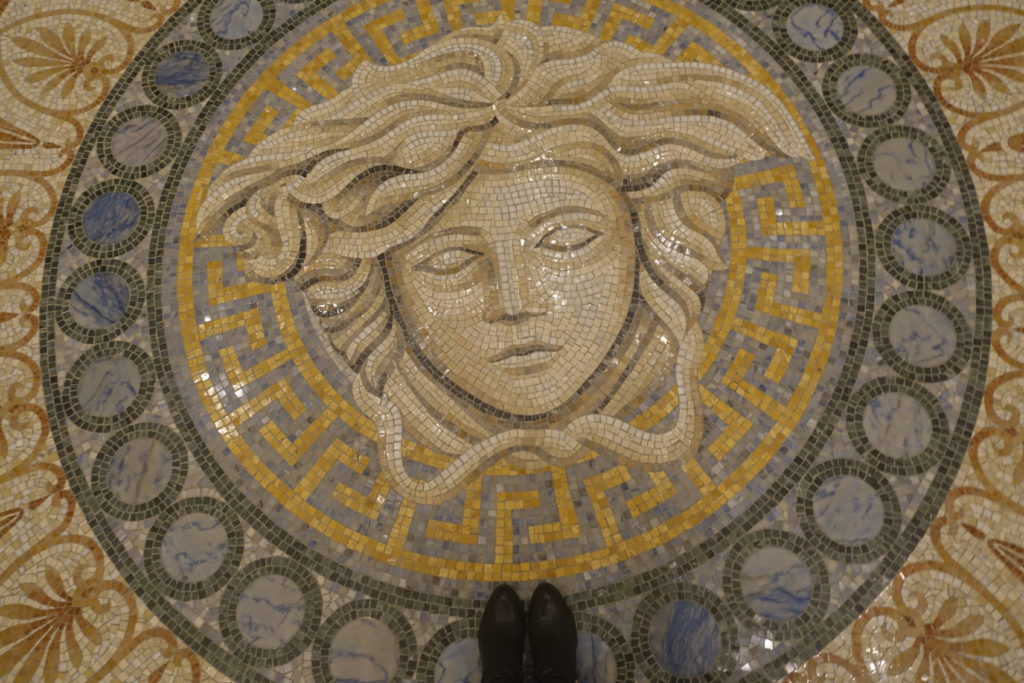