This trip was actually not my first visit to Hawaii – My parents had taken Ju and I on a family holiday….maybe 20 years ago? To be honest, I didn’t remember a thing. Not until we were ushered to our first-come-first-serve seats at the long table for our Luau dinner at the Polynesian Cultural Centre, with a fresh flower lei around my neck, I had the deja vu moment: “I had been here before”. Just like my dad said I would. 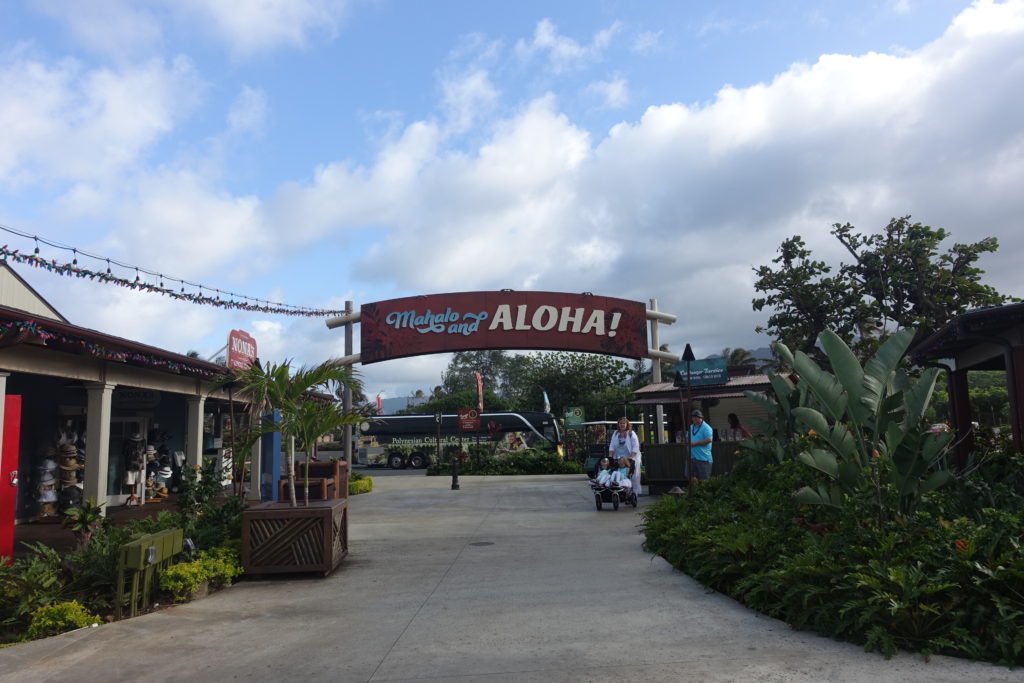 Luau is the (touristy) thing to do when in Hawaii. It is basically a Hawaiian party that consists of a traditional feast, music and entertainment. 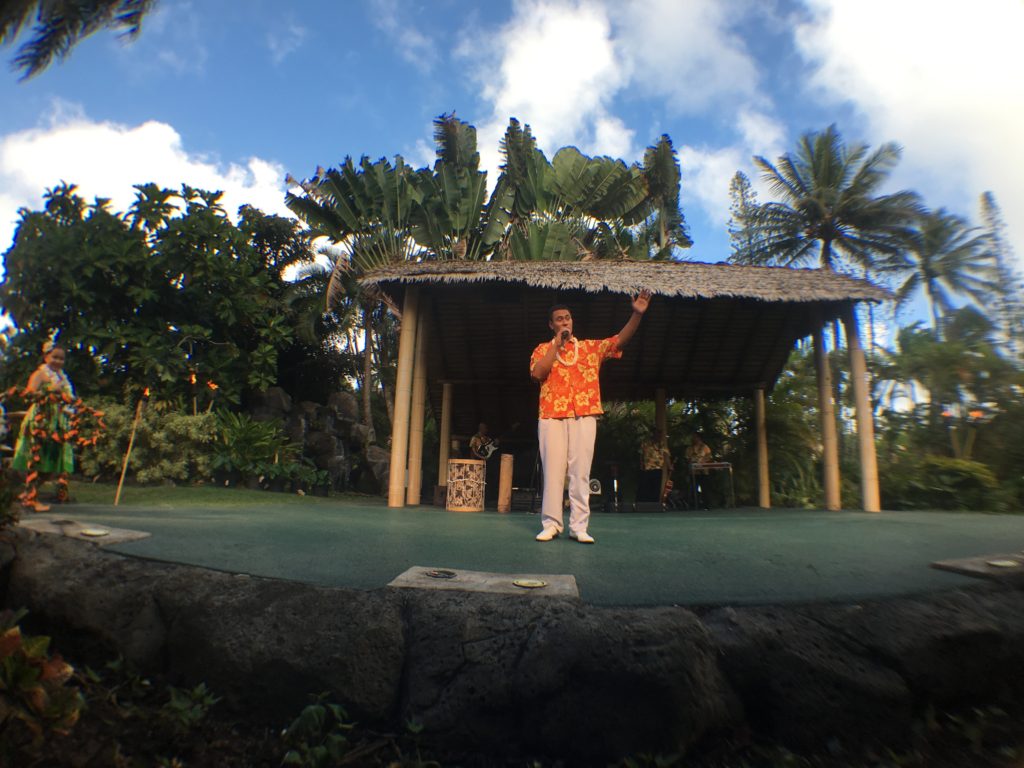 Our host for the night. He reminded me of Russell Peters.

The most special thing about a Luau is the Kālua Pig, also known as Luau Pig. Kālua is a traditional Hawaiian cooking method that utilises an imu (underground oven). The beauty of this method is that the food is prepared and buried in the morning, cooked slowly throughout the day for 6-7 hours and dug out just in time for dinner. Yep, just like a slow cooker, but cooked in nature!

Our host took us to the outdoor theatre on the side of the stage for the unearthing of tonight’s Kālua Pig. 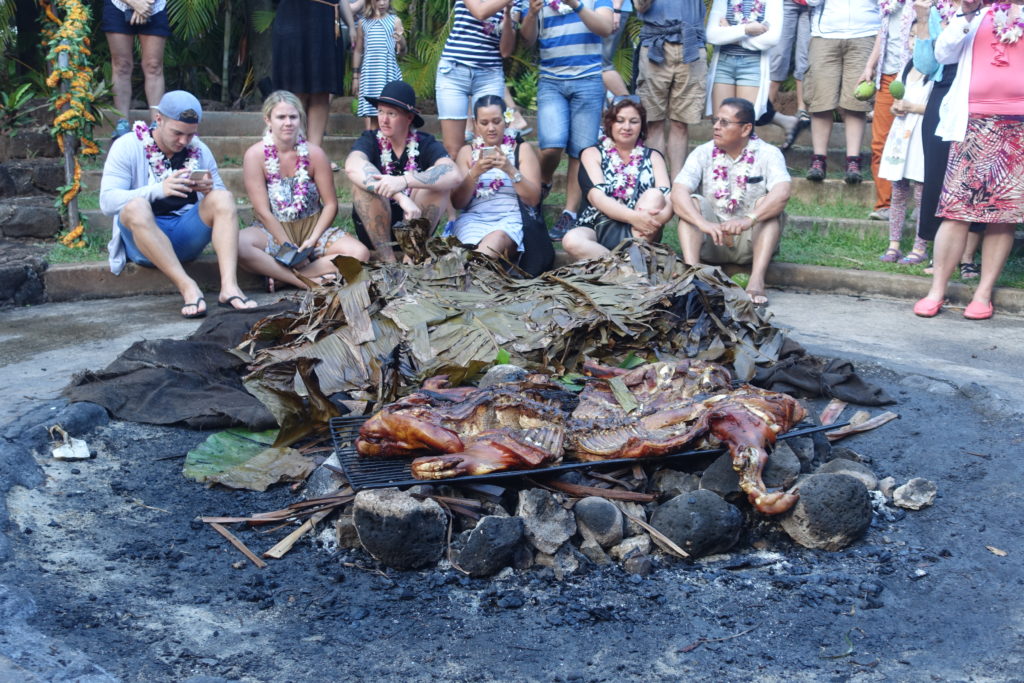 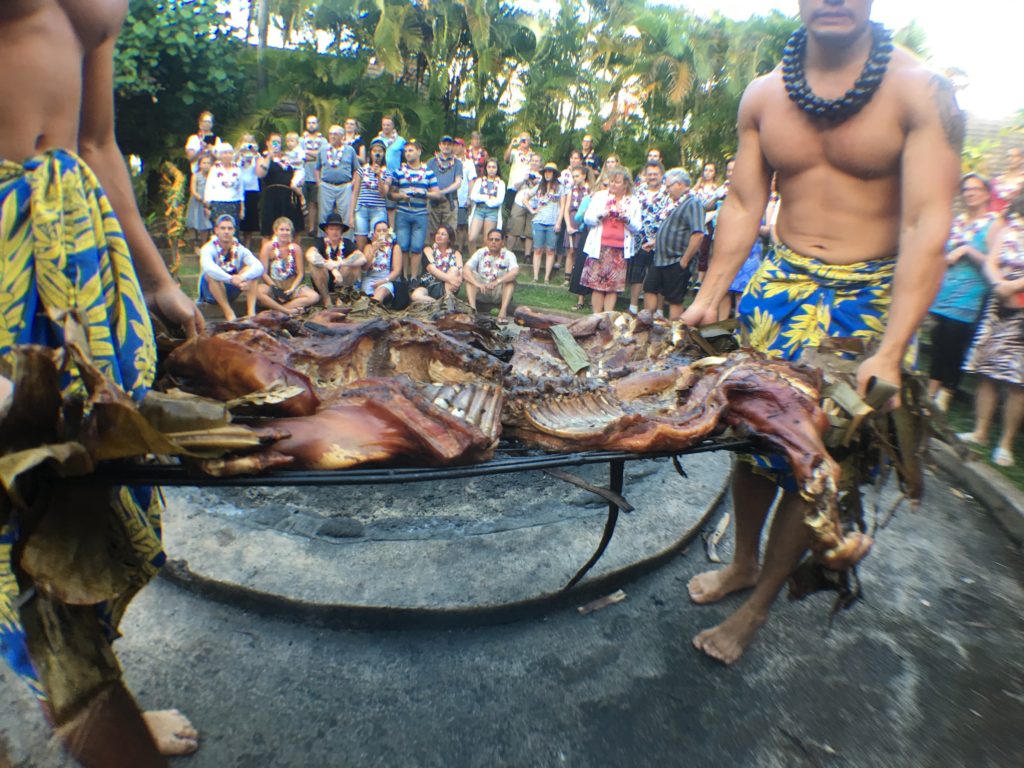 The male dancers brought the Kālua Pig around for photo-taking before they took it to the buffet to serve. 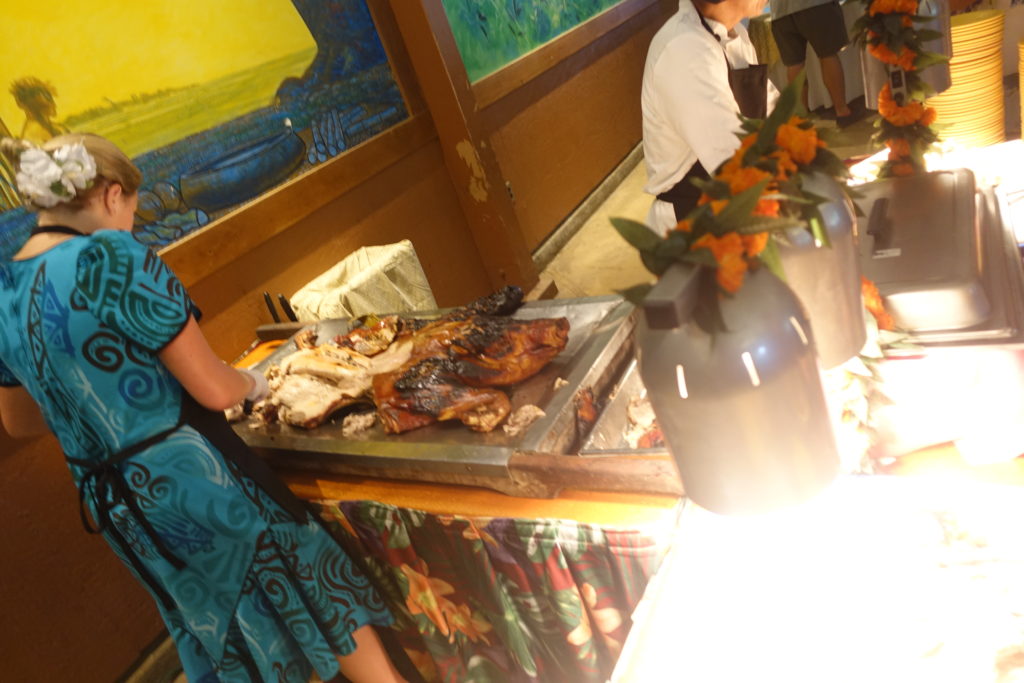 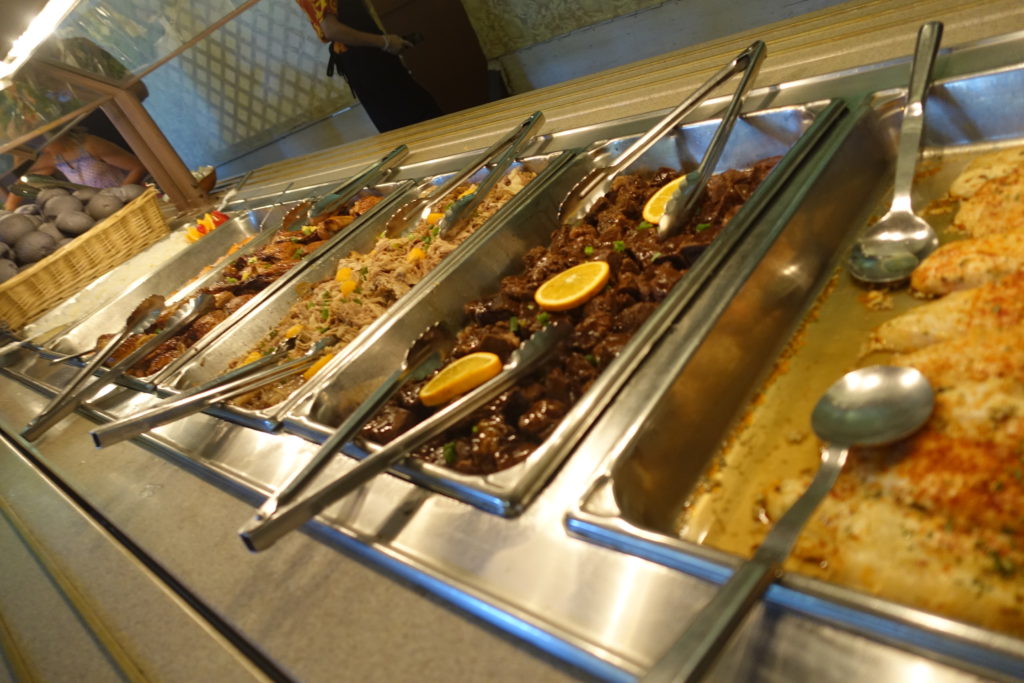 Other food at the buffet. Some fish, some meat, some vege. 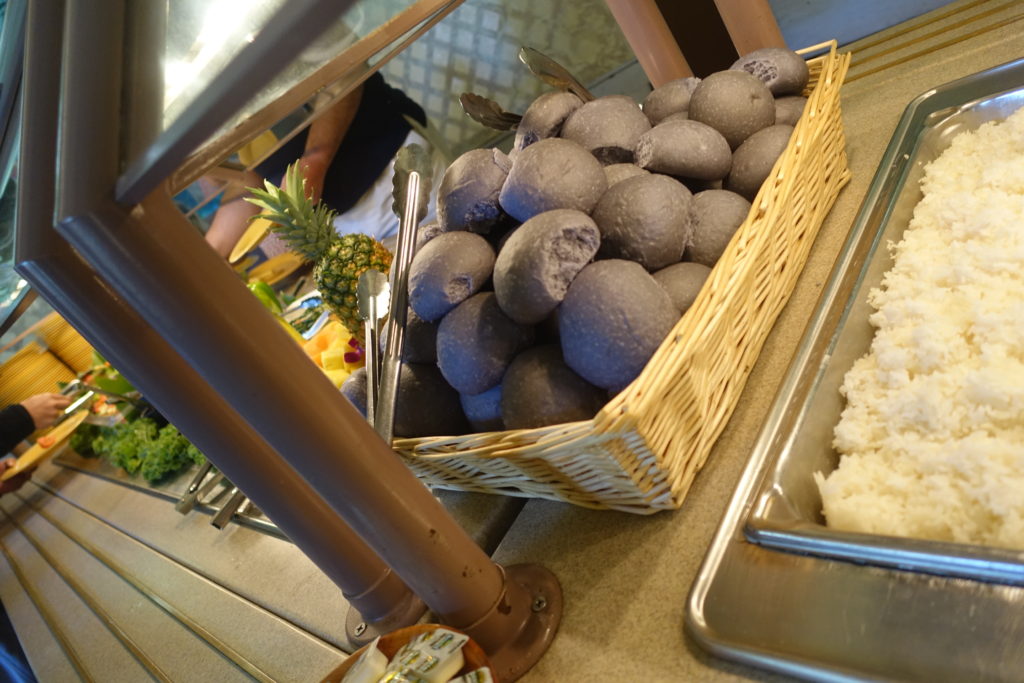 I also tried some poi, which is watery mashed taro that the Hawaiians like to eat fermented…I didn’t like it. 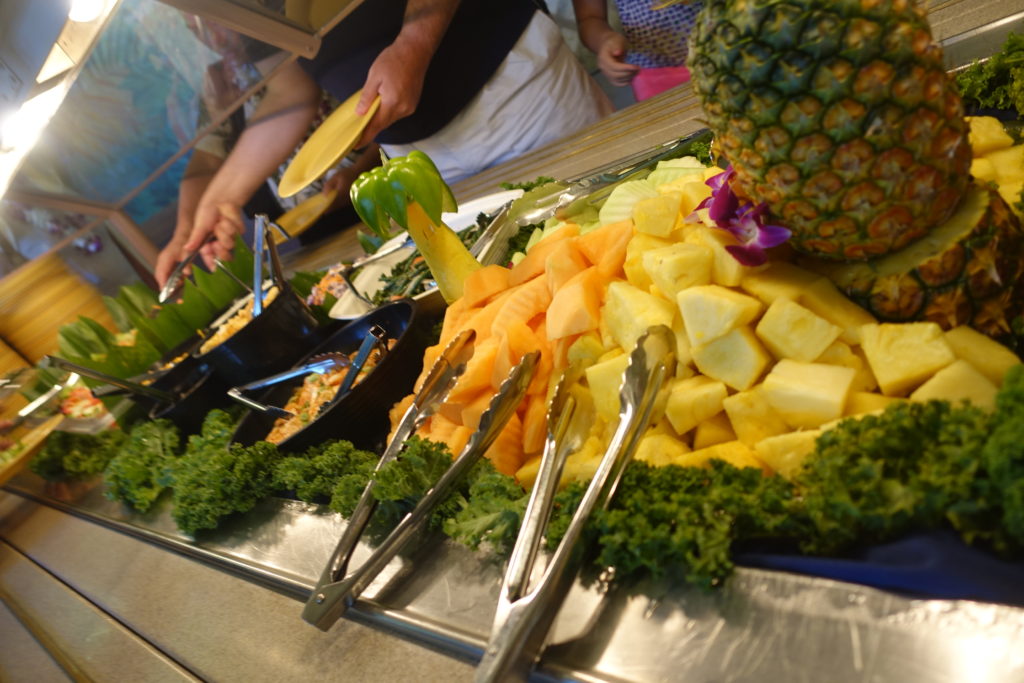 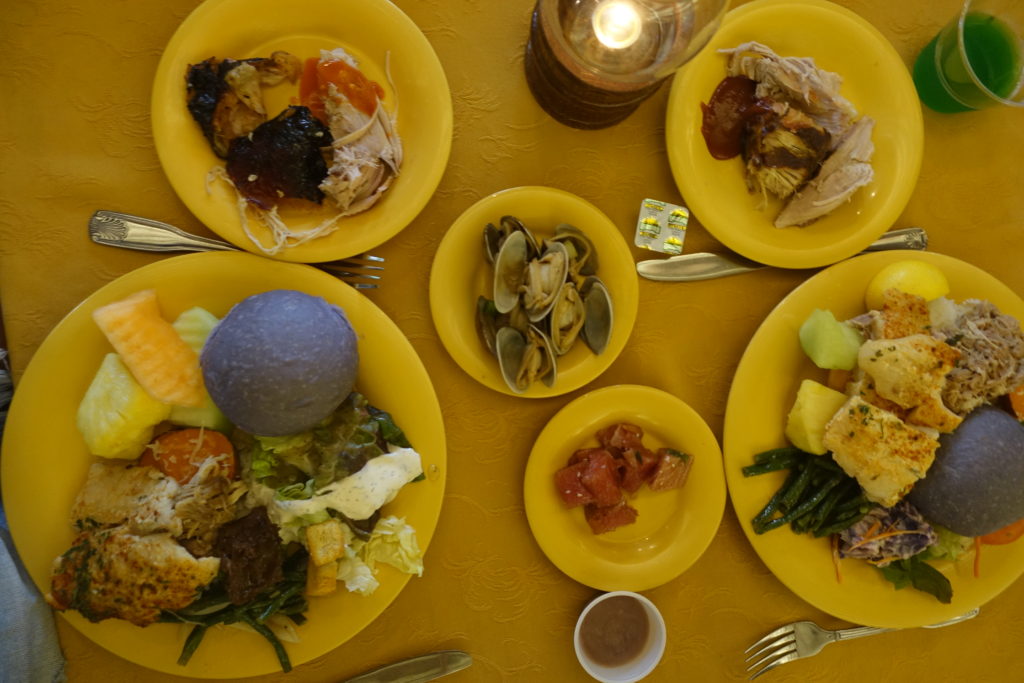 Our dinner. Not the best food I had in Hawaii. 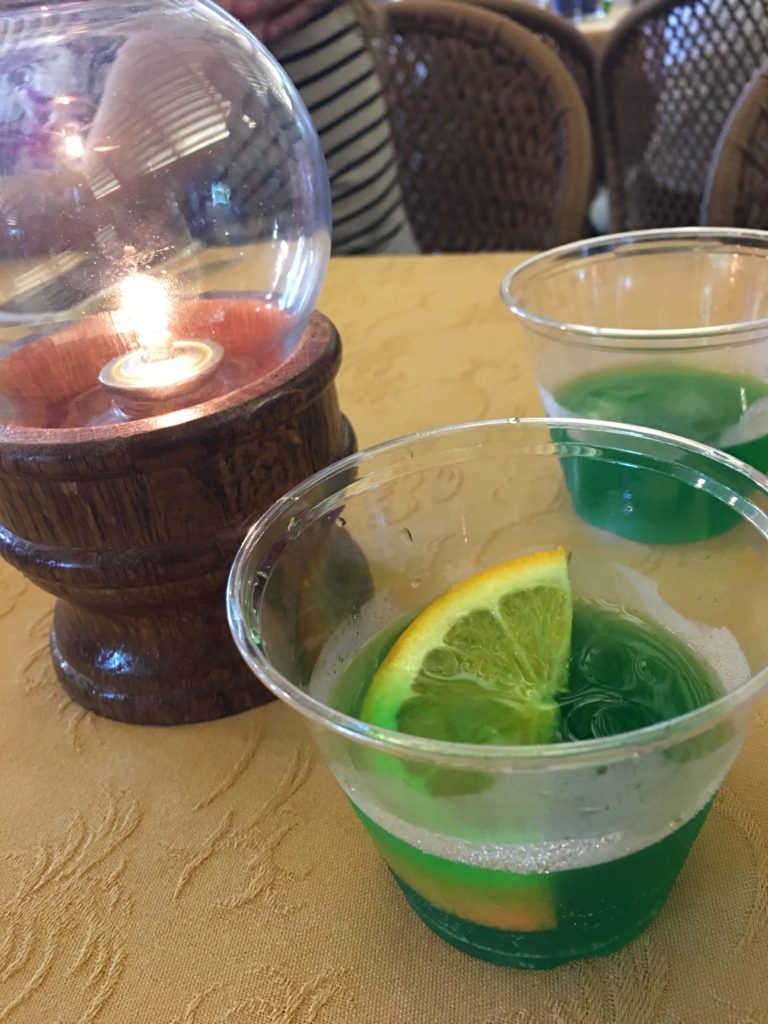 The welcome cordial. Yep, it wasn’t a cocktail – not because it’s cheap…but because The Polynesian Cultural Centre is owned by Mormons so it’s an alcohol free venue! (!)

Mike and I are not big drinkers so it didn’t bother us. I can see how it could be a bummer for some people though. 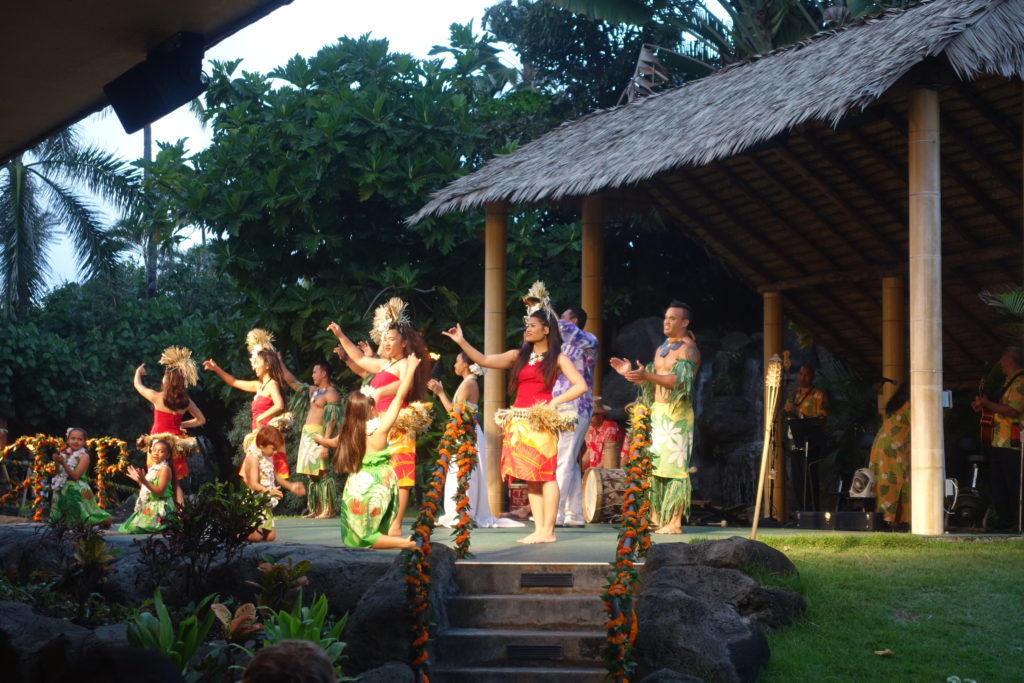 Our biggest disappointment (that we suspected was also Mormon-related) was…the performers’ costumes. I didn’t notice it at first, but towards the end of the show and mid-dance, Mike asked me “when are they gonna do the hula?”. I was like “What are you talking about? They are doing hula now”. Mike looked confused and said “no but I thought hula is done in straw skirt and bikini?”

And then I realised, he’s right! All the dancers were dressed very conservatively and nothing close to the classic “coconut bikini and straw skirt” hula that one would expect to see in Hawaiian dances. Don’t get me wrong, it’s not that we wanted to see the dancers dressed provocatively, it’s just that what we saw was very different to our idea of Hawaiian hula (not to mention how the hula dance sets being sold at the souvenir shops in the Centre also contained a coconut bra and short straw skirt!). Other than that, the hula performances were elegant and beautiful which I did enjoy. 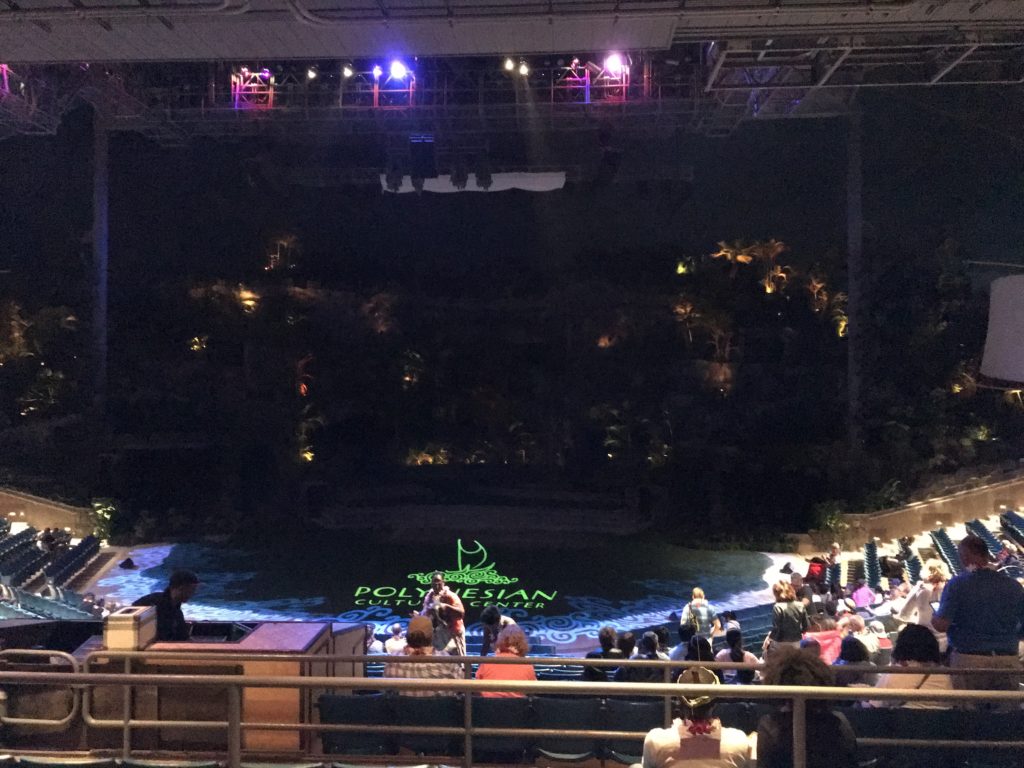 We also went for the evening show “Ha: Breath of Life” after the buffet dinner. The show was spectacular and filled special effects, lighting, fire dances and elegant Polynesian dancing. I liked it.

No photos were allowed during the show so I didn’t take any.