(Check out my flowing lava video!)

The Big Island is home to the most active volcanoes in the world. The Hawaii Volcanoes National Park on the south coast of Big Island is massive and the whole island is a living geology classroom displaying its one-of-a-kind volcanic landscape.

There are only two ways to see hot flowing lava in Hawaii: helicopter tours or lava hike tours. (Update: Or, if you are lucky enough, you may have a third option to view lava from a boat tour when lava flows directly into the ocean) 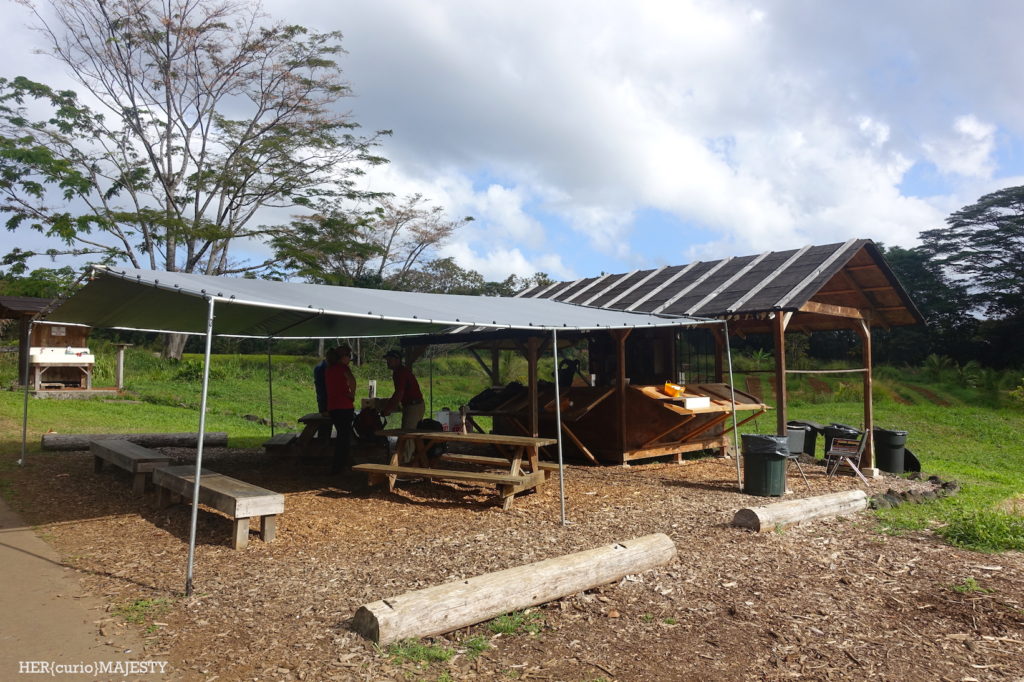 Here are some of the lava hike companies I found online:

Ahiu Hawaii was the only company that operated their lava tour when we visited in February 2016. The thing with lava hikes is that you can never predict where lava is going to flow to the next day. This makes estimating the hiking distance and route difficult. If lava decides to flow to private property, then the tour wouldn’t be able to take you there without the property owner’s consent. In Ahiu Hawaii’s case, the owner actually bought a piece of land to access the public lava field area so that their tours can continue to operate. How cool is that.

Be prepared: What you need to bring on lava hikes

You don’t really need to bring anything except to ensure that you wear appropriate hiking attires:

Ahiu Hawaii gave each of us a backpack packed with two 1-litre water bottles, ziplock bags, trail snacks and a pair of gloves. Ahiu Hawaii also bought us a 6-inch Subway sandwich each for lunch on the way. The tour guide had insect repellant so just borrow theirs. Of course, remember to slap some sunscreen on before you start the hike. 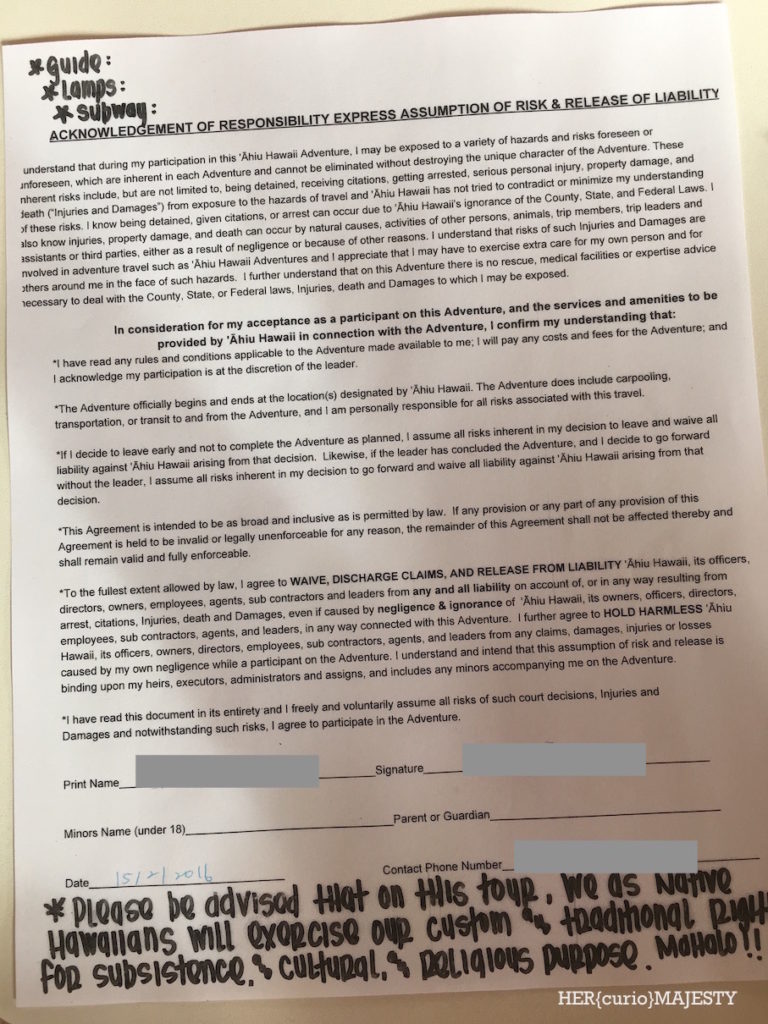 Hike at your own risk! Lava hikes are not for the faint hearted. The hike is physically demanding with high risks of getting burnt and help would be far away if any bad happened. 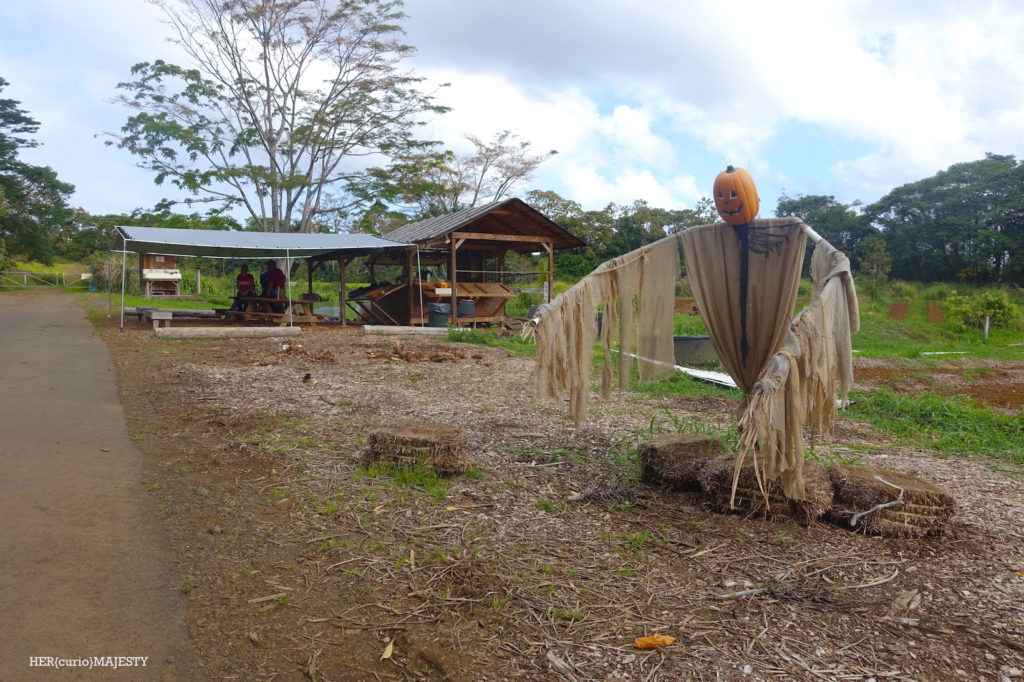 The meeting point for Ahiu Hawaii is rather difficult to find. The street numbering stops after 290 so we drove frantically back and forth the street trying to find the correct address before the meeting time. Luckily for us, there was an old lady on the side of the road doing gardening so we asked her for directions. Turned out, No. 291 was on an uphill driveway next to the old lady’s house. 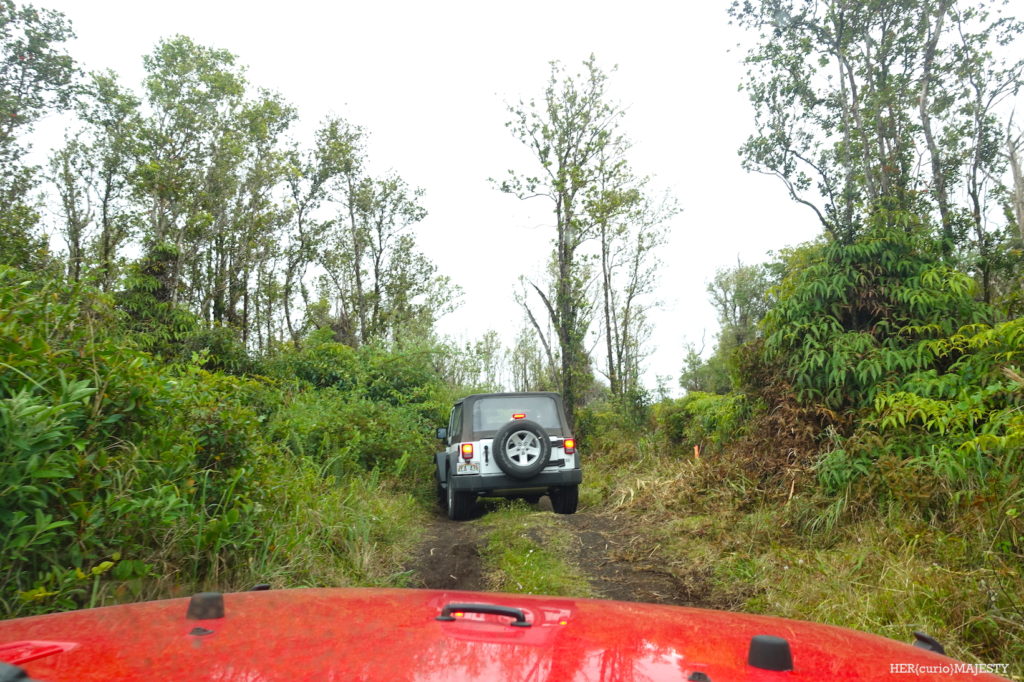 The tour does not include transportation, so you do need to have your own car. 4WD is not essential, but it definitely helped that we had one because there was a short strip that was especially bumpy when we got close to the private land entrance. 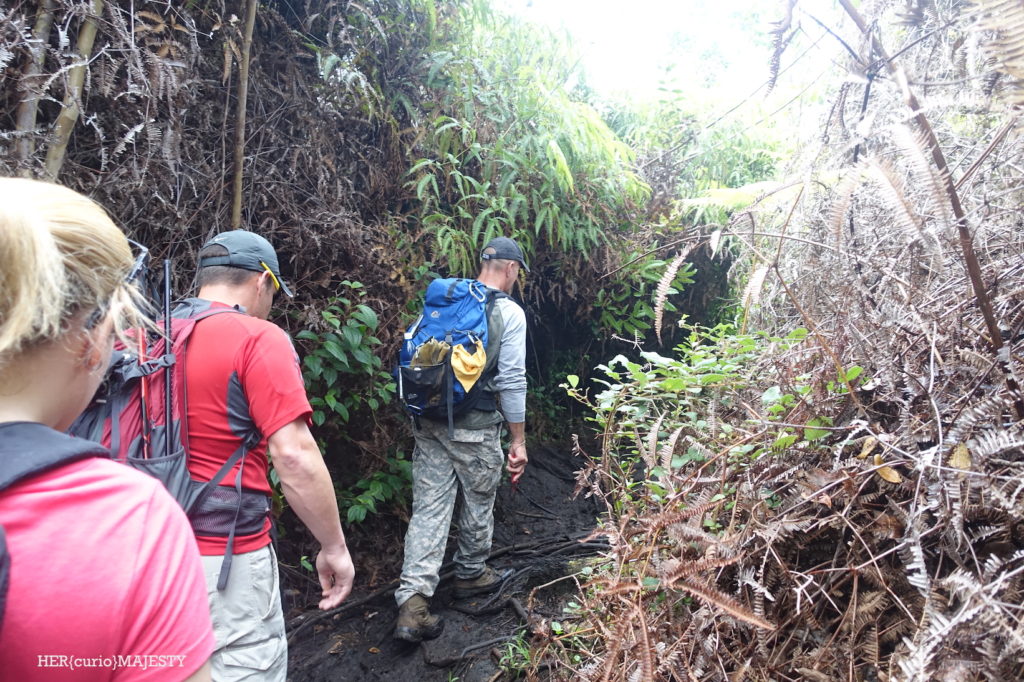 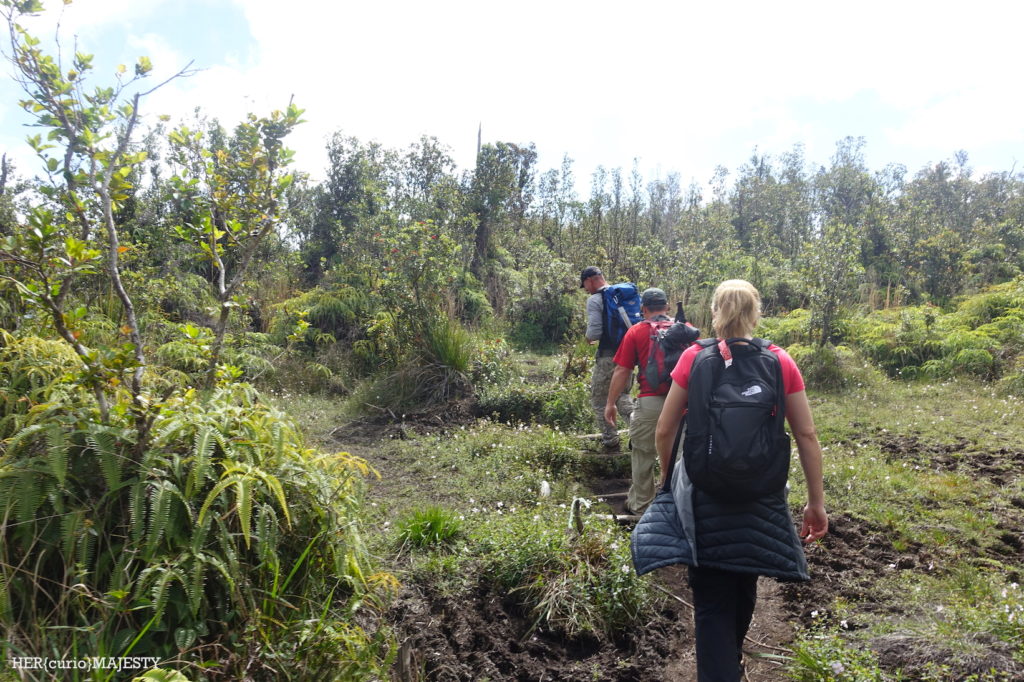 The hike wasn’t particularly difficult (for us), nor was it very scenic. There were only the four of us plus one tour guide, so we kept up a pretty good pace.

NOTE: After reading some TripAdvisor reviews, I now understand how lucky we were that the trail was dry hence wasn’t difficult! I would suggest that you read other reviews too (especially closer to your hike day) so that you are prepared. 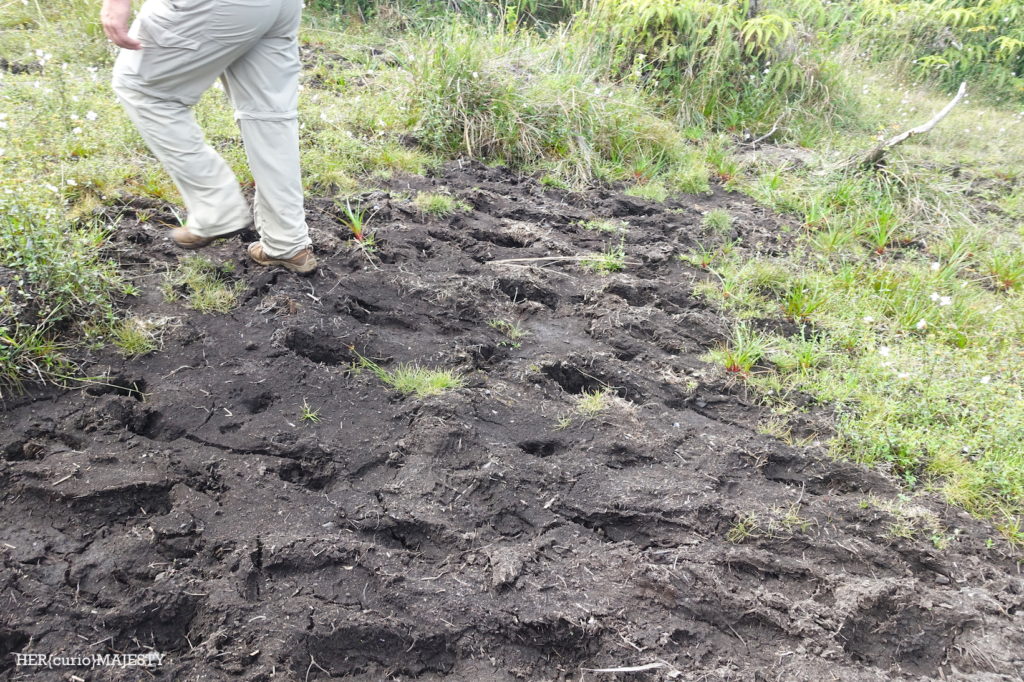 Due to El Niño, Big Island was unusually dry at that time for the season. Our guide said this stretch was known as “the swamp”, and if we had come a few weeks earlier, we would have had a very muddy hike. He constantly had to pull hikers’ legs out of the knee-deep mud and he even duct-taped some hiker’s shoes to their shins so that they wouldn’t lose their shoes all the time!

We were really lucky that we got to do a dry and clean hike. 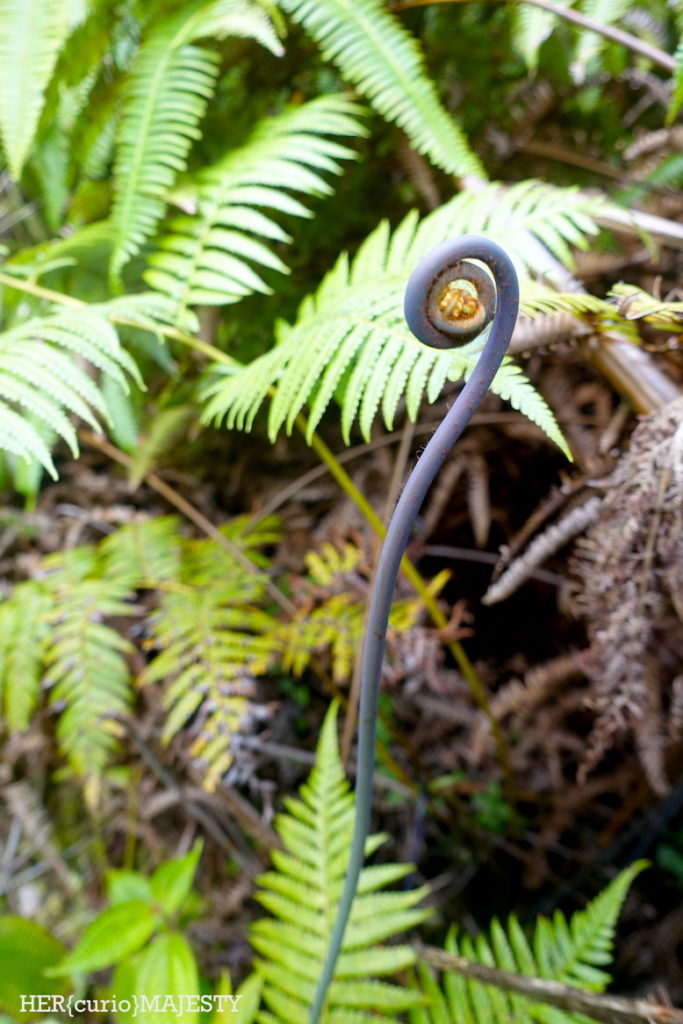 Even though the hike through the rainforest was not particularly scenic, our guide told us lots of stories about Hawaii and lava to keep us entertained. 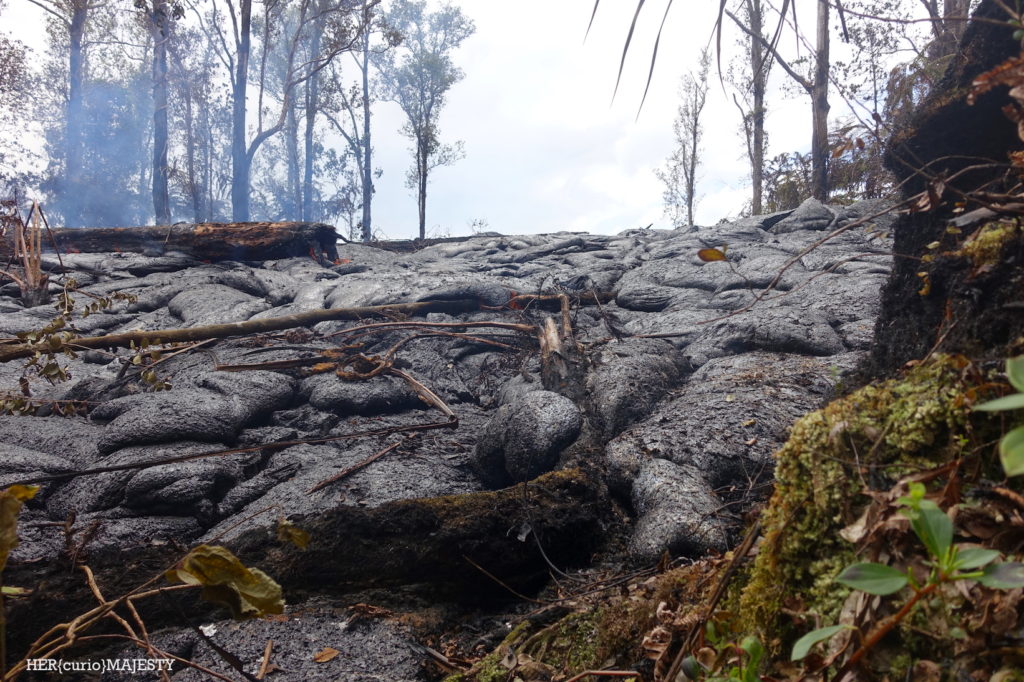 After 2 hours, the rainforest came to an abrupt stop. We saw the land in front of us being covered in black dry lava. Our guide told us to wait inside the rainforest for him while he went to find us some flowing lava. 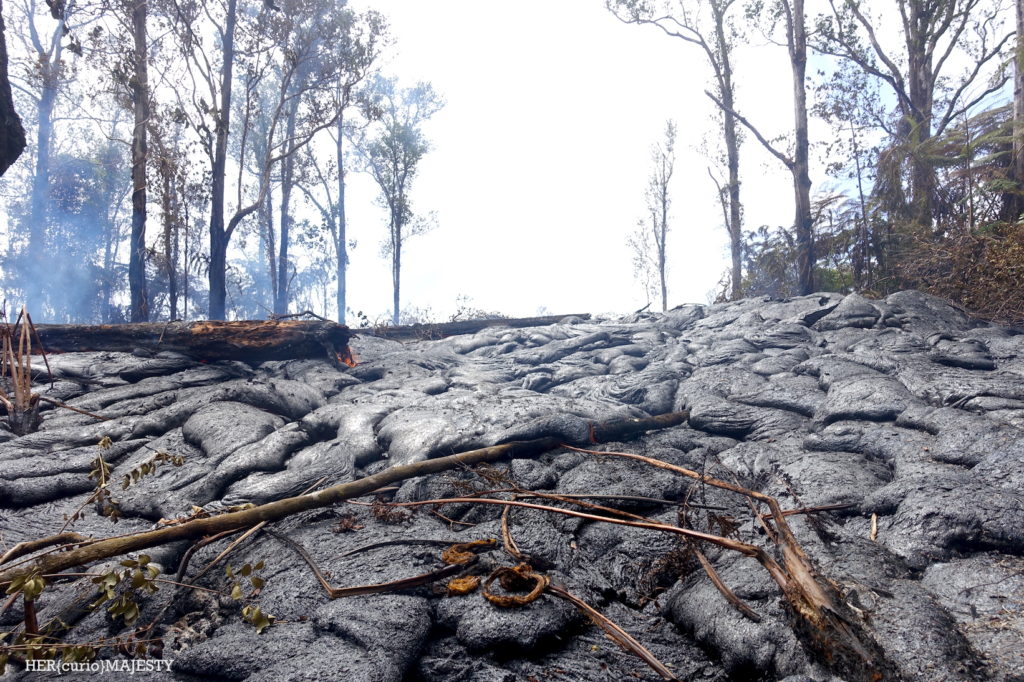 We waited and had our Subway sandwich. Waiting there, we could hear the constant hissing sound of fire burning and occasional explosions (actually) from far and near. Then my imagination ran wild…what if our guide got into trouble and never came back?

After maybe 20 minutes, our guide returned looking half baked. He said he found some lava flowing, but the location was too difficult for us to get to. He had to go again to find or create an alternative route using his slasher. After a brief rest, off he went again. 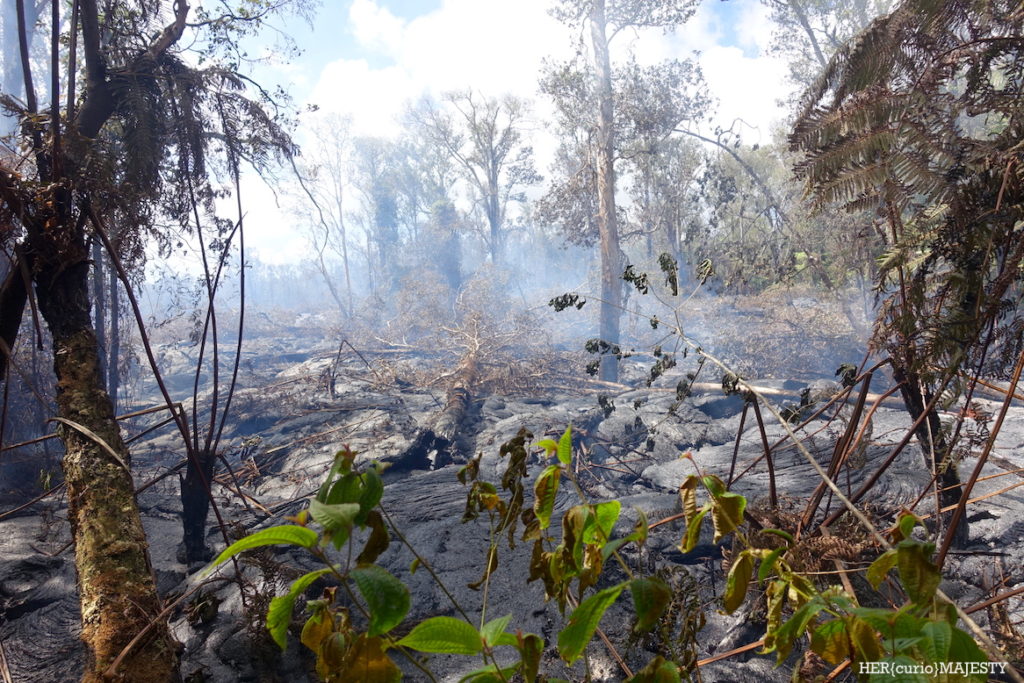 He came back. This time, with good news. 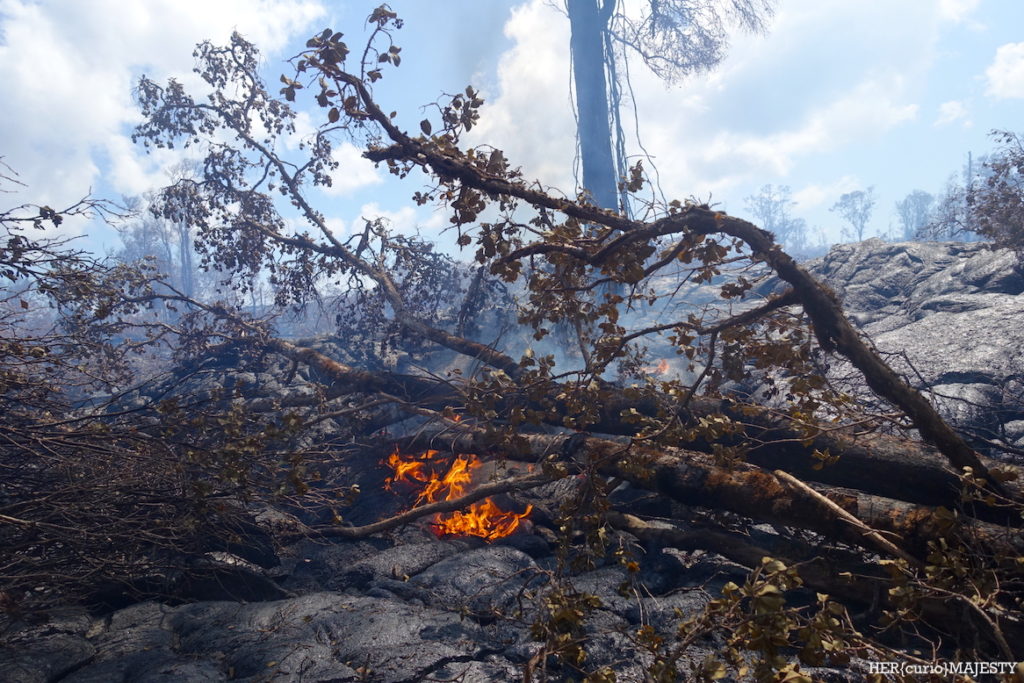 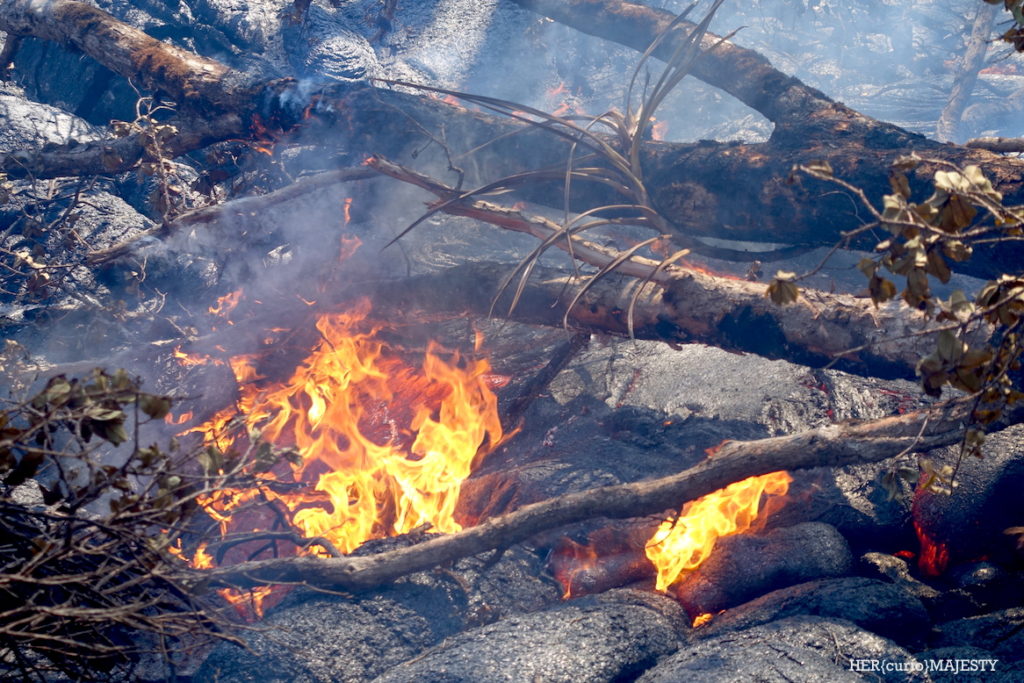 There was fire everywhere, igniting the trees and destroying everything it touched.

It was a pretty powerful sight.

We followed our guide’s footsteps and walked on the hardened surface of lava. 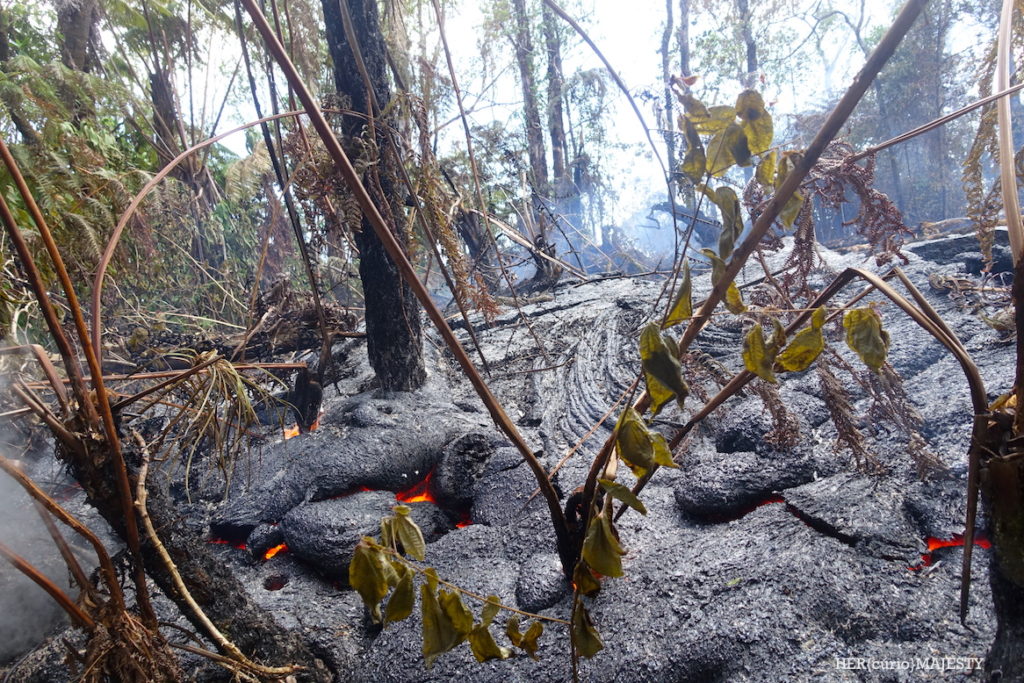 Underneath the hardened lava surface, there were red glows and fire burning underneath that kept emitting heat. I can’t think of a better way to describe it except to say it must be what hell would look like. 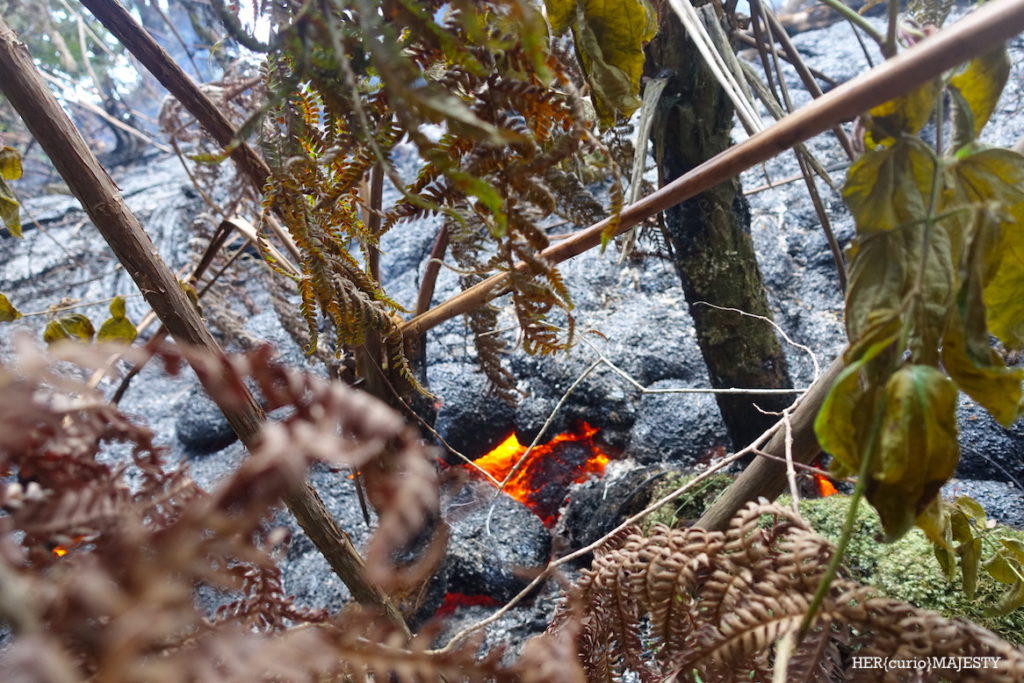 As I walked on the dry lava field, all I could think about was “Omg, please don’t trip. Please don’t trip”. I could just imagine how my palms would catch fire if I lost my balance and tripped over! 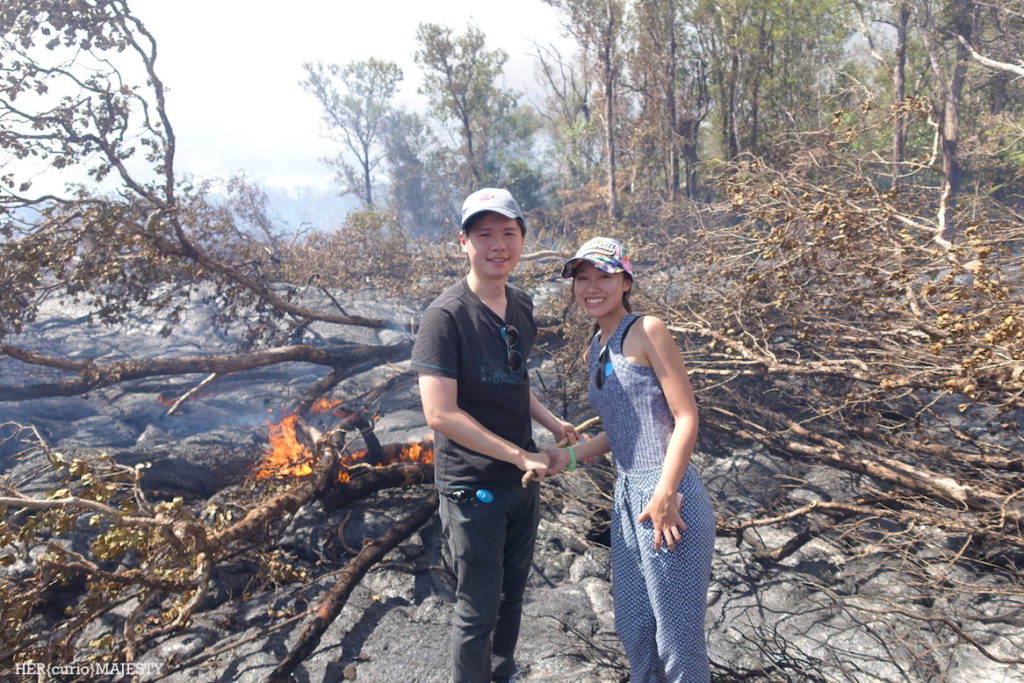 5 minutes later, we found our first flowing lava underneath these branches. Woohoo.

Flowing lava was just behind us in between the fallen branches. Can you tell that we were on the brink of dehydration? The air was extremely hot it was suffocating. We had to take time-outs to hide back into the rainforest every 30 seconds to cool down. It was quite exhausting having to run back and forth onto and off the field, but we were super stoked being able to get so close to flowing lava! 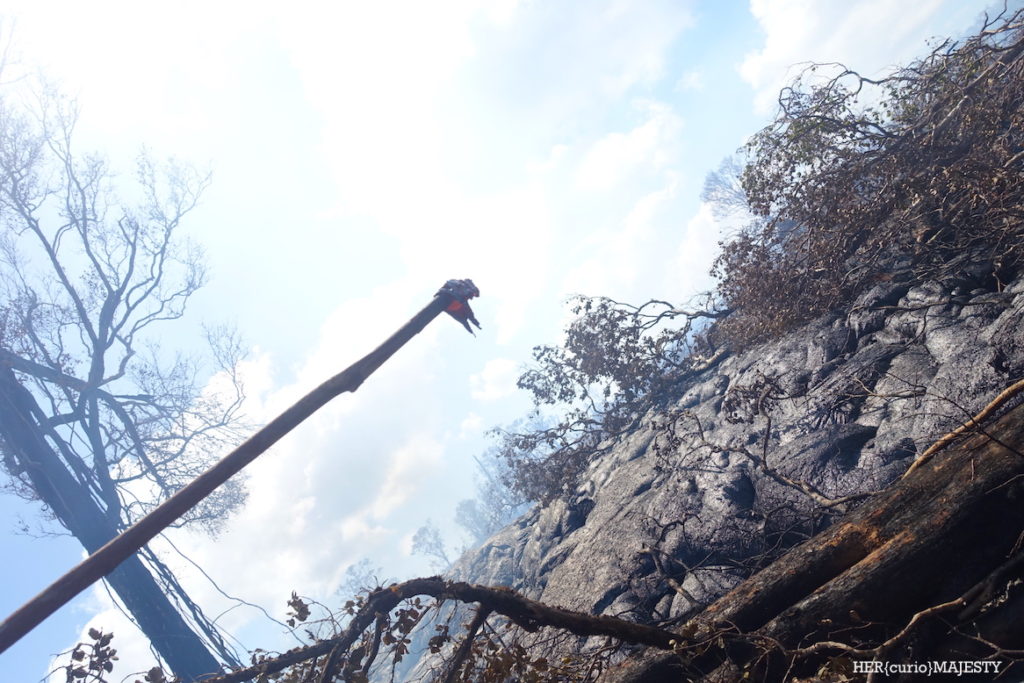 Our guide showed us how to pick up lava using a stick. The trick is really just common sense – keep a good control so that you don’t flick the stick and burn the person next to you with lava on a stick!

After spending about 20 minutes at this place, our guide asked us if we wanted to try out another spot where he figured may also have flowing lava. We thought, why not! So he took us back to the end of the rainforest where we came from, then he went the other way to find us a safe route to the other side. A few minutes later, he came back and exclaimed: “Hey guys, there’s a big flow of outbreak over there! It’s a little far out but it’s amazing.” 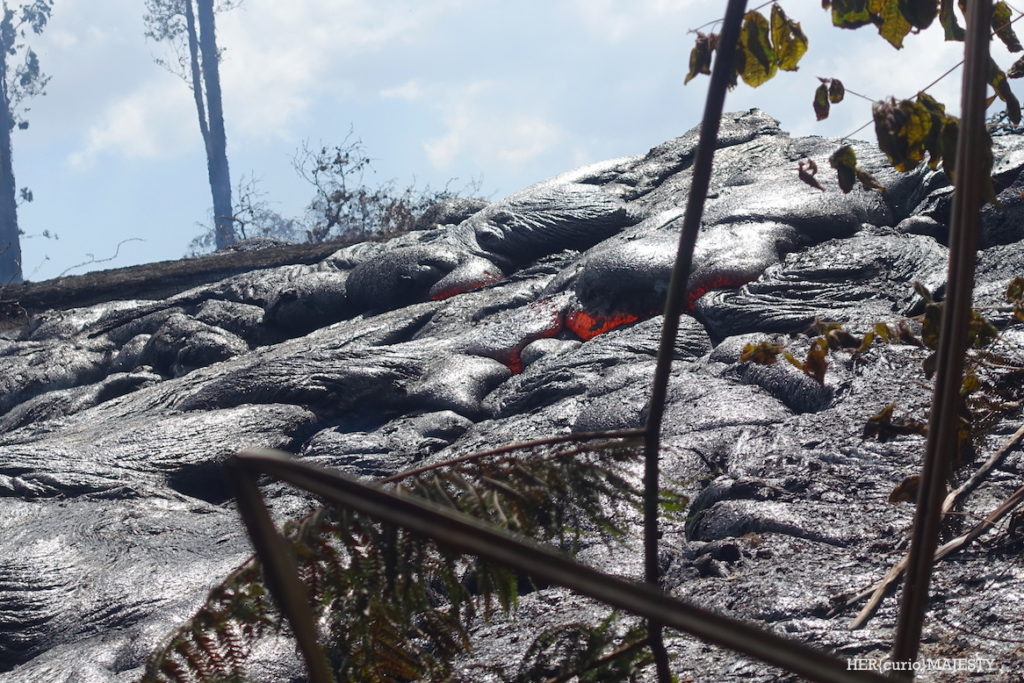 For every step that I got closer to where he saw the outbreak, the heat intensified, relentlessly. Just as I was probably 5 steps away from where he was pointing us towards, I gave up. I just couldn’t! I felt like my arms were going to catch fire any second. 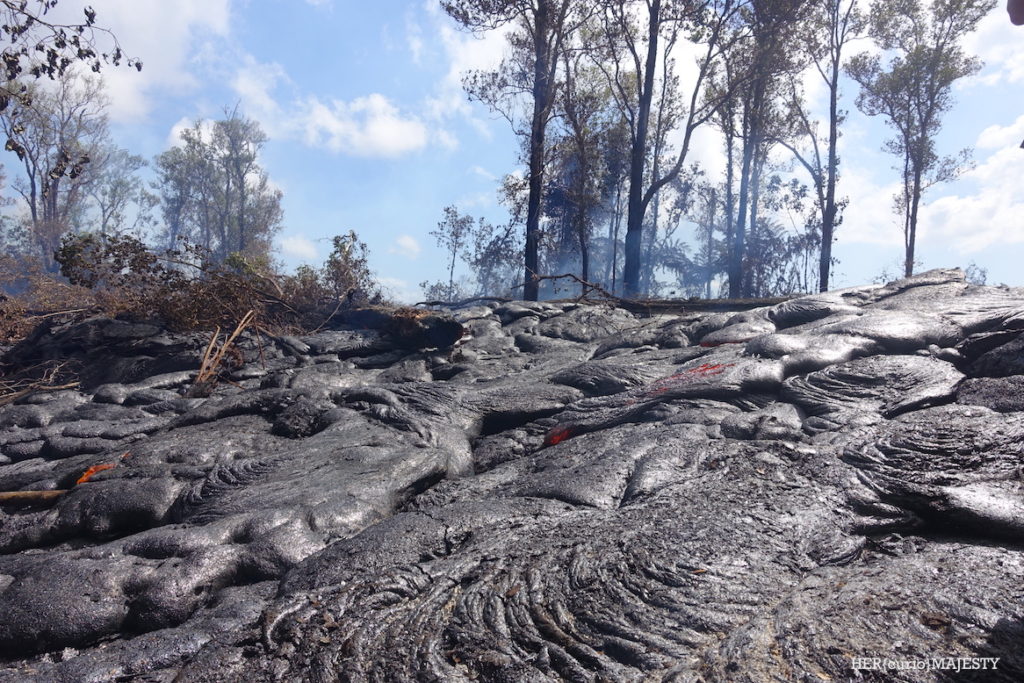 After I cooled down a bit in the rainforest, I decided to give it another shot. The flow had gotten a little closer to where we were and this time, I made it!

This was how close we got to the flowing lava (right behind us). The three seconds felt like an eternity because my right arm felt like it was a few seconds away from getting charred like a chicken wing in a powerful industrial oven! 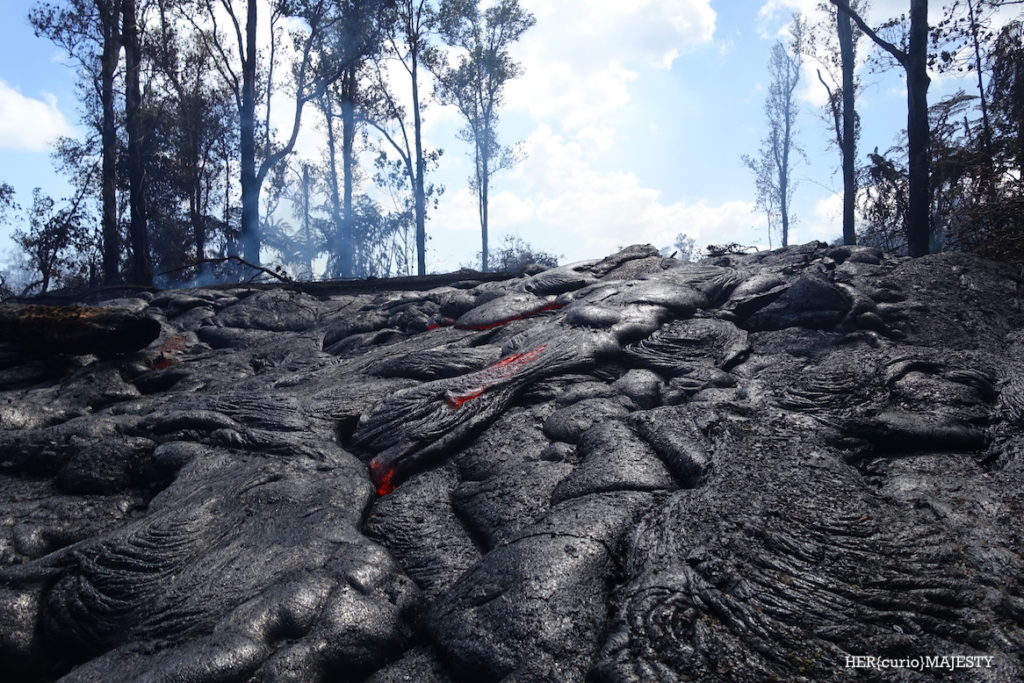 After we finished admiring the waterfall-like lava outbreak, we realised that some lava had flown towards our rainforest opening! 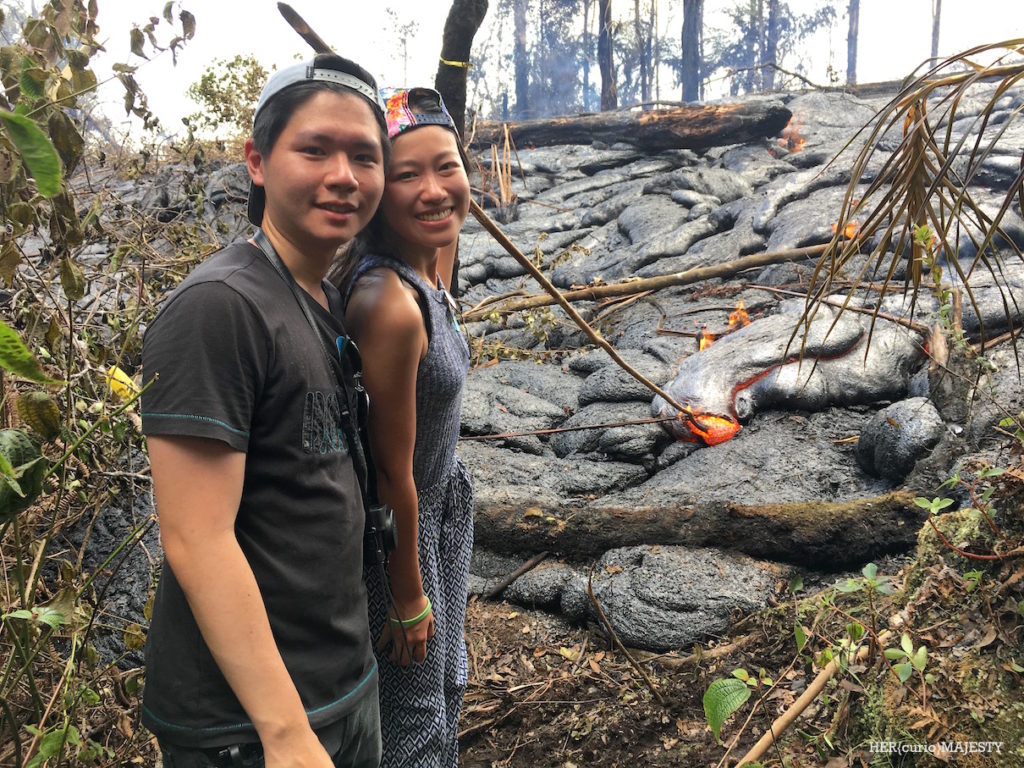 That was so lucky of us because we were able to stand inside the shelter of the rainforest with the lava flowing just an arm’s length away! It was a true demonstration of the unpredictable nature of lava flow – one minute we were looking everywhere for a flow, the next minute it appeared right in front of our eyes.

We were also told how truly lucky we were to have found flowing lava after only 2 miles (less than 4km) in, our guide had taken groups that had to walk 6 miles (almost 10km – one way!) before they found any flowing lava! 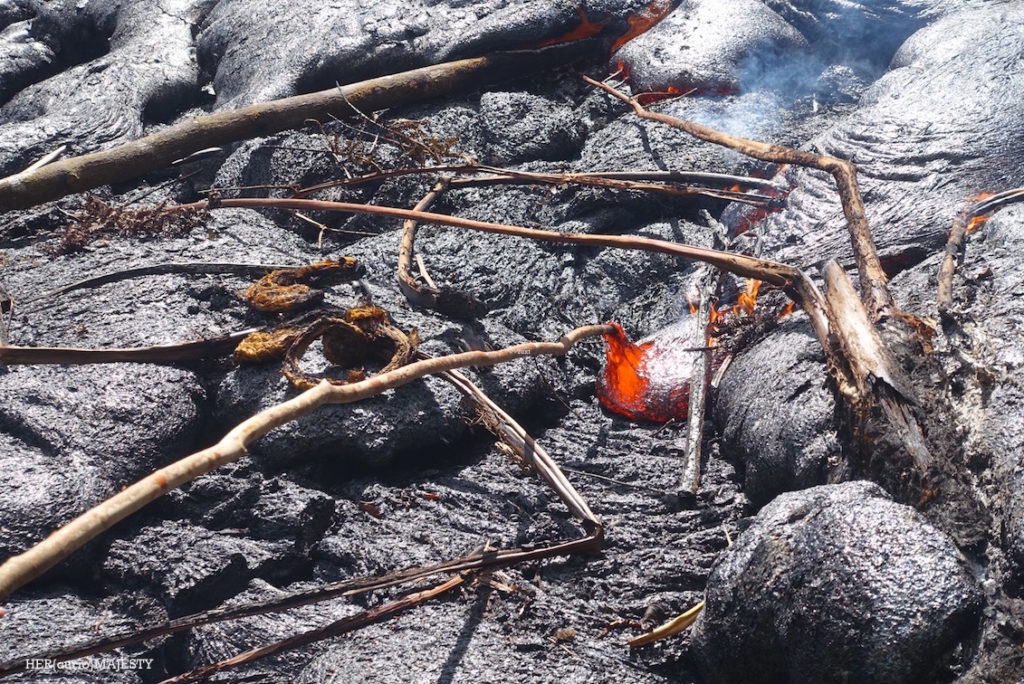 A close-up showing the texture of lava 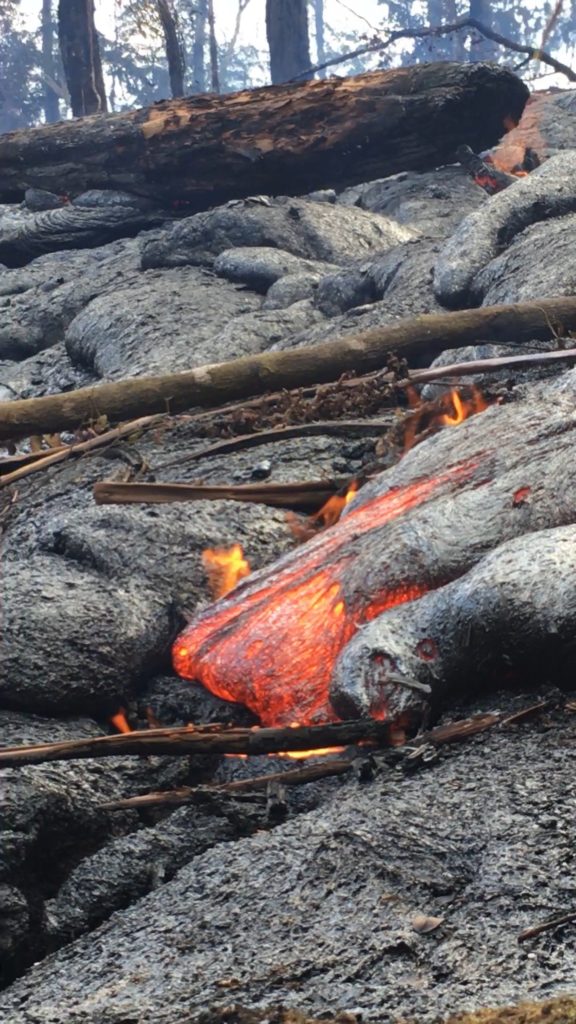 Needless to say, we were really happy with Ahiu Hawaii’s lava hike tour. Our tour guide’s day job is a firefighter, and it was really comforting to know because he obviously knows a lot about fire (and first-aid if required) and we could tell that he is knowledgeable in lava as well. The funny thing was, the other guy on our tour was also a firefighter back home! I felt double safe.

If you want to do something truly amazing on Big Island, join a lava hike! I highly recommend it.

Want to see more of our adventure in Hawaii? Read on!